Ashley Park Brings Her Own Reality to ‘Emily in Paris’

The actress who plays Emily’s scene-stealing best friend is headed to the big screen. 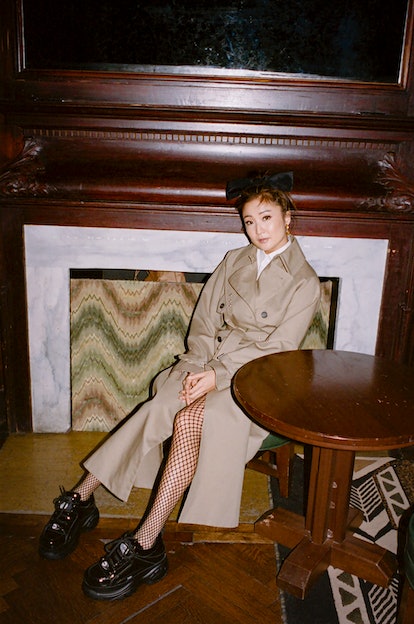 It should come as no surprise that Ashley Park, the actress who embodies the effervescent, devil-may-care Mindy on Emily in Paris, is just as high-spirited on-screen as she is in her real life. As a part of her job, the actress has had the chance to work in “dream” locales, flying from New York to Paris, and recently, Vancouver for an upcoming R-rated comedy film in which she plays a young woman who travels to Asia with her three close friends in search of her birth mother. But Park was settling in for her Emily in Paris press run in Los Angeles when she called W—and divulged as much as she could about the new season of her very popular Netflix show and upcoming blockbuster moment. She also went deeper, revealing her keen interest in playing complex, kind-hearted characters who care deeply about their friends and learn something about themselves in the process.

Born in Glendale, but raised in Ann Arbor, Michigan, Park attended art fairs and live musical performances from a young age, which the actress suspects had something to do with her attraction to performing on stage. “We were only supposed to live there for a few months,” she explains of the Midwest. “It was the dead of winter, but my mom told my dad, ‘We have to raise our girls here.’”

Park describes herself as a very energetic child: she started dancing and playing the piano at a young age, performed in the middle school choir, and sang in her high school a cappella group. She also remembers being “bit by the theater bug” in sixth grade, when she started listening to Broadway casts’ recording albums. “My perception of Broadway at the time was that Broadway was like a building, far away,” she remembers with a laugh. “The Sound of Music and Julie Andrews were my favorite when I was really little, so I was always fascinated by music coming into the story and characters singing in a way that opens up the story to propel it forward.”

She didn’t find her way into the world of musical theater until later, after she received a cancer diagnosis her sophomore year of high school, and took eight months off to recover. When she returned to school, she was focused on having fun, and musical theater was just another extracurricular activity. But once she performed in Thoroughly Modern Millie, she committed to making performance her life, attending the University of Michigan for Musical Theater and later returning to her high school to direct.

From then on, Park soared to Broadway, where she appeared on stage in The King and I, Sunday in the Park with George, Mean Girls, and Grand Horizons. The latter was her most recent, pre-Covid Broadway production, in which she played a stressed-out mom-to-be dealing with her husband’s decision to put his parents in a retirement community. It was her first play after a handful of comedies and musicals, but she says she felt like she got a master’s degree just by being in the presence of the cast, which includes dramatic actors like James Cromwell and Jane Alexander. “If you know me in real life, I live in kind of a world of comedy,” Park says. “But I also have a deep well of emotion, and what I discovered in Grand Horizons, especially in creating an original play, is that the most hilarious comedy and the most deep-seated drama really lives on this tight line right next to each other.”

“When you see someone having a total breakdown and crying their eyes out, but trying to laugh their way through it, there’s something that strikes a chord of familiarity and accessibility with an audience. And when someone is laughing hysterically, like Gretchen in Mean Girls, knowing that inside there is this turmoil and high stakes drama, that’s why it’s funny,” Park says of the characters she’s been cast as over the last decade. “I’ve become more interested in that conversation as an actor: not forcing an emotion on an audience, but trying to fight whatever emotion you’re feeling because that’s what we’re constantly doing as humans.”

Park may now be recognized for playing the role of the scene-stealing best friend on Emily in Paris, but a closer look at the emotional tenor of her performances reveal that, if there could be a thread through her theater, television, and soon, film characters, she is drawn to playing women who are in a state of identity flux. Jess, her Grand Horizons character, grapples with going from wife to mother; Gretchen from Mean Girls jockeys for her position in the school’s most powerful trio of popular girls; and Mindy from Emily in Paris comes to terms with her status as an ex-pat in Paris and as a young woman whose familial ties seem to be near-broken. All of them struggle, to varying degrees, with sharing their real feelings with those closest to them, and have the tendency to take care of others before taking care of themselves.

In the process of portraying these characters, the actress says she’s begun to learn even more about herself. “Maybe it’s because we all are constantly trying to figure out who we are, I think that’s the whole point of this world,” she tells W. “And if we’re able to, we try to help other people along that way, too, and find out who they are.”

In this upcoming season of Emily in Paris, available on Netflix December 22, fans of Mindy should be pleased with her larger storyline. Audiences will find out a bit more about her mysterious dad, and watch Mindy as she tries to get a job as a nightclub performer (only to be thwarted, initially, into the role of la dame pipi, the straightforward French term for restroom attendant). “I think we took the best parts of season one and made it better,” Park says of season two. “Season one, we see Paris through Emily’s fish-out-of-water perspective. It makes sense that we delve into secondary characters’ storylines, especially Mindy, because they live together and you see more of their casual daily life together. It propels their friendship and the story further.”

Park will also flex her vocal skills in season two. She was not cast in the show with the intention to sing, but after the positive response to Mindy’s vocal prowess in season one, series creator Darren Star made the decision to write Park’s real-life skill into her character on the show. (It’s not the first time Park has sang on television before, either; you can see Tina Fey’s girl group comedy Girls5eva for more of Park’s vocal talent).

Singing (and speaking) in French posed a bit of a challenge to Park at first (she studied the language in middle school, but hadn’t practiced nearly as much as when she first moved to France to film Emily in Paris). “In France, people who would recognize me from the show would start talking to me in French. I need to know exactly what I’m saying, so I’m translating in my mind,” she says with a laugh. “Like, okay, I am going to construct a sentence: I had an egg for breakfast. By the time I get it in my head, it’s taken so long, we’re talking about dinner.”

Next year, Park will star in an unnamed comedy from Adele Lim (who also wrote the screenplay for Crazy Rich Asians). Details are still kept tightly under wraps, but the actress describes it as a heartfelt mix of The Hangover, Girls Trip, and Bridesmaids. “I feel like I filmed 25 movies within this movie because it’s action-packed, every scene is a moment, and everything is unexpected,” she says.

“Filming this R-rated comedy shook me to my core; I’m very happy with the human that I am, but the question of identity is so big. I’ve never seen Asian women like portrayed like this—just Asian women being Asian women on a screen,” Park goes on. “This is the first time I’ve worked with all-Asian department heads, the directors and writers were all Asian females, all of the other leads were Asian actors. It was really a game-changer for me because you get to make it completely about the work and your character when you’re not having to explain the perspective from which you’re coming.”

Now that she’s wrapped season two of Emily in Paris and Lim’s film, Park is sufficiently bitten by the movie bug. “Film is the marriage between what I love about theater and what I love about TV,” she says. “I’m fascinated by on-screen work because you’re playing for an audience that’s going to see it much later. There’s a puzzle, and with films, you can delve deeply into that puzzle.”

Hair by Nero; Makeup by Misha Shahzada; Special thanks to Georgia Room NYC.