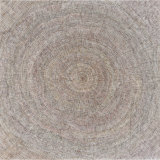 Her thing. Complex, hypnotic paintings based on traditional themes.

Our take. In the small community of Peppimenarti, about 200 kilometres south of Darwin, Regina Pilawuk Wilson is the matriarch. She founded this settlement in 1973 with her late husband, Harry Wilson, the leader of a group of Ngan’gikurrungurr people who left a Catholic mission and went searching for a place to live on their traditional homelands.

The women of Peppimenarti have always been weavers, but Wilson was inspired to take up painting after a trip to Noumea for the Festival of Pacific Arts in 2000. She would find her subject matter in the sun mats, message sticks and fish traps already being made in the community.

To the untutored eye, her dense meshes of closely packed, overlapping lines might look entirely abstract but Wilson always has a particular object in mind. On canvas, the woven forms take on a cosmic dimension, with thousands of rippling lines radiating from a central core, or spreading across a surface as a mass of broken rhythms.

Now regarded as one of Australia’s leading Indigenous artists, Wilson has won the National Aboriginal and Torres Strait Islander Art Award, and had work exhibited in the US and Europe, most recently at the Phillips Collection in Washington, DC.

Can I afford it?
There are not many paintings in this show but each one is an exquisite, painstaking artefact. Two pictures are selling for $34,000 – Syaw (Fish Net) (200cm x 200cm, above) and Yerrdagarri (Message Stick) (200cm x 220cm). The lowest price is $12,500 for a smaller version (100cm x 120cm) of Syaw (Fish Net). It’s surprising to find that Wilson’s most expensive sale to date is just $40,000, but with the growing international interest, that record looks decidedly shaky.

Where can I have a squiz?
Vivien Anderson Gallery, 284-290 St Kilda Road, Melbourne, until September 21; vivienandersongallery.com.

To read more from Good Weekend magazine, visit our page at The Sydney Morning Herald, The Age and Brisbane Times.