Embattled Liberal MP Andrew Laming has retained his position as the chair of a parliamentary committee, which pays him an extra $23,237 annually, even though he vowed two months ago to stand down from all parliamentary roles.

Labor on Tuesday tried to force Dr Laming out of his role as chair of the parliamentary Standing Committee on Employment, Education and Training over what the party described as his “long history of trolling and abusing his own constituents on Facebook,” which one woman said left her considering suicide. 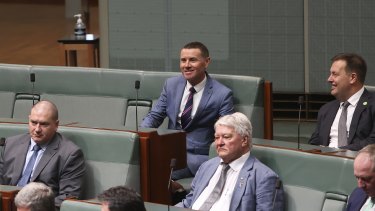 Andrew Laming (centre, rear) has survived a Labor attempt to remove his position as chair of a parliamentary committee.Credit:Alex Ellinghausen

But Coalition MPs voted down the motion and Dr Laming, who represents the Queensland seat of Bowman for the Liberal National Party, said Labor’s attack on him was misleading.

“To refer to me and misrepresent me as a ‘taxpayer-funded troll’ for my online work, with all posts remaining online and visible to the public, is a misrepresentation and a reflection on my character,” Dr Laming told Parliament.

When the allegations against Mr Laming surfaced in March amid a storm over the treatment of women in politics, he apologised for his actions in the House of Representatives and issued a public statement.

“I will step down from all Parliamentary roles effective immediately and complete both the counselling courses I committed to as well as additional clinical counselling, and ask for privacy while that is completed,” Dr Laming said.

He then took health leave, undertook online empathy training, received a diagnosis for ADHD and returned to work this month.

Queensland Police investigated allegations Dr Laming had photographed a woman with her underwear visible at her workplace in March. They “determined there is no evidence to indicate a criminal offence”, a spokesman said.

Labor’s chief tactician, Tony Burke, said Labor had expected Dr Laming to either stand down from the education and training committee or be removed by the government.

“This man has been targeting his constituents with abuse. He has a long history of trolling and abusing his own constituents on Facebook. If you behave that way you are not fit to be a member of Parliament,” Mr Burke said.

The Morrison government would lose its parliamentary majority and fall to minority status if Dr Laming was forced onto the crossbench, which the Prime Minister has declined to do.

However, Dr Laming has been disendorsed by his party, entitling him to a taxpayer-funded payment of six months’ salary, worth about $100,000. He has also threatened defamation action over some of the reports about him.

Our Morning Edition newsletter is a curated guide to the most important and interesting stories, analysis and insights. Get it delivered to your inbox.