Prime Minister Anthony Albanese will join world leaders at a NATO summit in Europe at the end of this month in talks on global security, while Ukrainian President Volodymyr Zelensky has invited him to visit Kyiv.

The prime minister will attend the summit as part of a show of support from allies in Asia when the security alliance is responding to the invasion of Ukraine while confronting the “no limits” partnership between Russia and China. 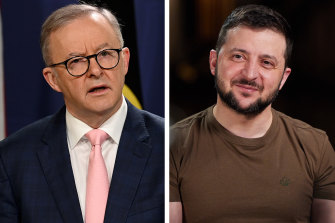 No decision has been made on whether Albanese would take up the invitation to add a visit to Kyiv to the European summit at a time when Russian missiles continue to fall on Ukrainian cities.

Zelensky included the invitation in a letter to Albanese last month to congratulate the prime minister on his election victory, while Ukrainian diplomats have confirmed the proposal in talks with Australian officials this week.

European leaders have stepped up their visits to Kyiv in recent weeks using a dedicated train service that carries them to the capital from Poland. French President Emmanuel Macron, German Chancellor Olaf Scholz and Italian Premier Mario Draghi arrived in Kyiv on Thursday with a “message of European unity” for the country.

The Australian mission to the NATO summit will also set up an opportunity for Albanese to meet Macron after the $830 million settlement last Saturday of the dispute over the cancellation of a submarine contract by the previous government.

Albanese will be part of a show of support for NATO from leaders in Asia after Japanese Prime Minister Fumio Kishida confirmed he would attend the summit, while South Korean President Yoon Suk-yeol is said to be doing the same.

A key issue is the shift in Chinese policy on the eve of the invasion of Ukraine, when Chinese President Xi Jinping and Russian President Vladimir Putin announced a “no limits” partnership on February 5 that included a declaration that they “oppose further enlargement” of NATO.

The Sydney Morning Herald and The Age revealed on Tuesday that Australia was being asked to back the plans being considered at the summit to “transform” NATO by sending more forces to the borders with Russia.

The agenda includes stronger cooperation on cybersecurity in response to heightened activity by Russia and China, an issue raised between NATO and Australian leaders in the past.

With Australia already sending military and medical supplies to Ukraine on regular RAAF flights into Poland, the Madrid summit will canvass further support from NATO members and partners as well as arrange the entry of Finland and Sweden into the alliance founded in 1949.

The government is dealing with a domestic energy crisis at the same time it steps up its global diplomacy, with Albanese holding talks with leaders from the United States, Japan, India and Indonesia in his first weeks in office.

Defence Minister Richard Marles will visit India earlier next week and will attend the Commonwealth Heads of Government Meeting in Rwanda later in the week with Defence Industry Minister Pat Conroy. Marles returned on Thursday from talks in Singapore and Tokyo.

Foreign Minister Penny Wong visited New Zealand this week and is due to be in Solomon Islands on Friday for talks with Prime Minister Manasseh Sogavare in the wake of his security agreement with China last month.

Albanese, Wong and Conroy are also expected to attend the Pacific Islands Forum in Fiji in the middle of July, seeing this as an opportunity to mend fences with regional leaders when Chinese Foreign Minister Wang Yi is trying to convince members of the forum to sign a regional pact with China.