Albanese needs bold policies to make his case with voters

Political leaders are an amalgam of policy and personality. What was unique about former Labor prime minister Bob Hawke and his treasurer Paul Keating, who later toppled his boss, was their ability to transform and modernise Australia’s economy while taking the public along on the reform journey. Part of the secret was forging a consensus, called the Accord, between business and unions.

It took charisma, political smarts and an awful lot of persuasion. It transformed Labor politics in Australia, restoring to the party some of the economic credibility it had surrendered during the shambolic final months of the Whitlam era. 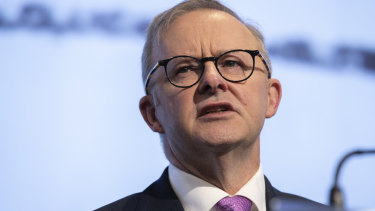 Anthony Albanese says he will take his lead from Bob Hawke and his successor, Paul Keating, if he becomes prime minister.Credit:Louie Douvis

In a speech at a business summit on Wednesday, Labor leader Anthony Albanese declared his desire, if elected as prime minister, to reignite the spirit of the Hawke-Keating governments and to emulate the consensus-style politics that became synonymous with that era.

With an election just a couple of months away, it’s a storyline Mr Albanese needs. Whether it’s fair or not, for any Labor leader to win an election, they must overcome the public perception that they are weaker on the economy than the Coalition. Kevin Rudd did it by describing himself as an “economic conservative”. Bill Shorten tried, and failed, to do it by finding revenue offsets for all his spending commitments.

It appears Mr Albanese will try to do it by hitching his star to the 1980s and 1990s, and the memory of Hawke and Keating. But on both the economy and national security, his lack of experience gnaws at his credibility. In his days as a minister under Mr Rudd and Julia Gillard, Mr Albanese never filled a senior economic portfolio, instead overseeing at various times transport, regional development, infrastructure and local government. His shadow treasurer, Jim Chalmers, may have written his doctoral thesis on Mr Keating’s prime ministership, but any comparison to the former Labor leader would be a stretch considering his relatively low profile and unproven capacity as a minister.

Invoking the Hawke-Keating years also jars with the small-target policy agenda Mr Albanese is taking to the election. While his caution is understandable after Mr Shorten’s expansive policy agenda became rich fodder for scare campaigns by the Coalition, the Labor reform years are best known for their bold policies. Bold is not a descriptor that represents anything Mr Albanese is offering.

Coming out of two years of unprecedented upheaval, it is hard to see either major party fronting up with an agenda that would further incite uncertainty. The challenges facing Australia’s next prime minister are formidable, both domestically and on the international stage. More than ever, decisions made today will have an impact on generations to come.

And yet both major parties are struggling to articulate a credible policy on climate change that will decrease carbon emissions fast enough to stave off further catastrophic events. Where are the policies to reform the tax or industrial relations systems, to start paying down debt, to help first-home buyers enter the market, or to give some hope to wage earners of a real pay increase?

These policies do not need to be radical, but some will require boldness. As Mr Hawke, Mr Keating and even former prime minister John Howard showed, Australians will ultimately accept bold change, even grudgingly, when our leaders have the charisma, or even just the political acumen, required to make the argument for change. Mr Albanese is right. Australia does need leadership that can take the public on a journey of policy reform. The question is whether he is the right person to fill that role.

Gay Alcorn sends an exclusive newsletter to subscribers each week. Sign up to receive her Note from the Editor.