The aged care industry says the federal government needs to pay for the wage increases flowing from the Fair Work Commission’s decision to lift the minimum wage or services could be cut.

While welcoming the decision handed down by the industrial umpire on Wednesday, Aged and Community Care Providers Association acting head Paul Sadler said the sector could not foot the bill without government intervention. 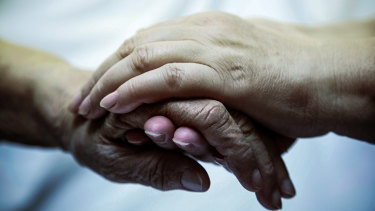 Aged care providers are calling for the federal government to foot the Fair Work increase for those on industry awards.Credit:Fairfax Media

“Everyone knows aged care workers need a significant pay increase, but without additional support from government, aged care providers will continue to face what the Royal Commission described as an impossible choice between investing in quality and finding savings to keep the doors open,” Sadler said.

Under the commission’s decision, 2.7 million Australians paid under industrial awards will receive either $40 a week more on lesser awards, or a 4.6 per cent increase on higher award levels. Multiple awards within the sector will be affected by the outcome, which comes into place on July 1.

The federal government has committed to fully funding the outcome of the Health Services Union’s separate case before the Fair Work Commission for a 25 per cent pay rise for aged care workers, a rise equivalent to about $5 an hour, which one provider body has said will cost $4 billion annually.

The royal commission found the government’s indexation of funding for aged care was not enough to keep up with increases over several years, with Sadler saying inadequate funding would hold back improvements in the sector.

“If we don’t see urgent action the aged care workforce crisis is simply going to translate into other serious problems like increased closures, or offsets in other areas such as training or investment in facilities,” Sadler said.

“A significant wage increase for our workforce is essential to attract new people and improve quality of care to older Australians, but when two-thirds of providers are already running at a loss year-on-year, we need the wage increase to be funded by the federal government.”

Health Services Union national president Gerard Hayes described Fair Work’s minimum wage and award decisions as “an interesting development” while the union’s own pay case was running, however he criticised the initial reaction of providers.

“It’s amazing how these poor people are going to ruin the country,” he said.