After my accident put me in a wheelchair, I became a disabled adventurer

This was the moment my life would change forever; I could sense it. I was tumbling uncontrollably down a vertical rock face.

My footing had been pulled unexpectedly from beneath me by a crumbling rock towards the top of the infamous ‘World’s End’ cliff face in North Wales.

It was in those truly terrifying moments, as life hung in the balance, that I promised to never give up – no matter the outcome.

My life was saved that day by the quick reactions of my climbing partner. Landing flat on my back on a ledge no more than six-foot wide, he jumped on top of my body as I was about to tumble even further down the cliff face.

Having survived the fall, it would take the Mountain Rescue and HM Coastguard team approximately three hours to safely winch me from the precarious ledge upon which I’d landed midway up the rockface.

In the moments after my fall, I soon came to recognise how badly injured I in fact was – I couldn’t move or feel below my chest, and I was in rapidly rising levels of pain. 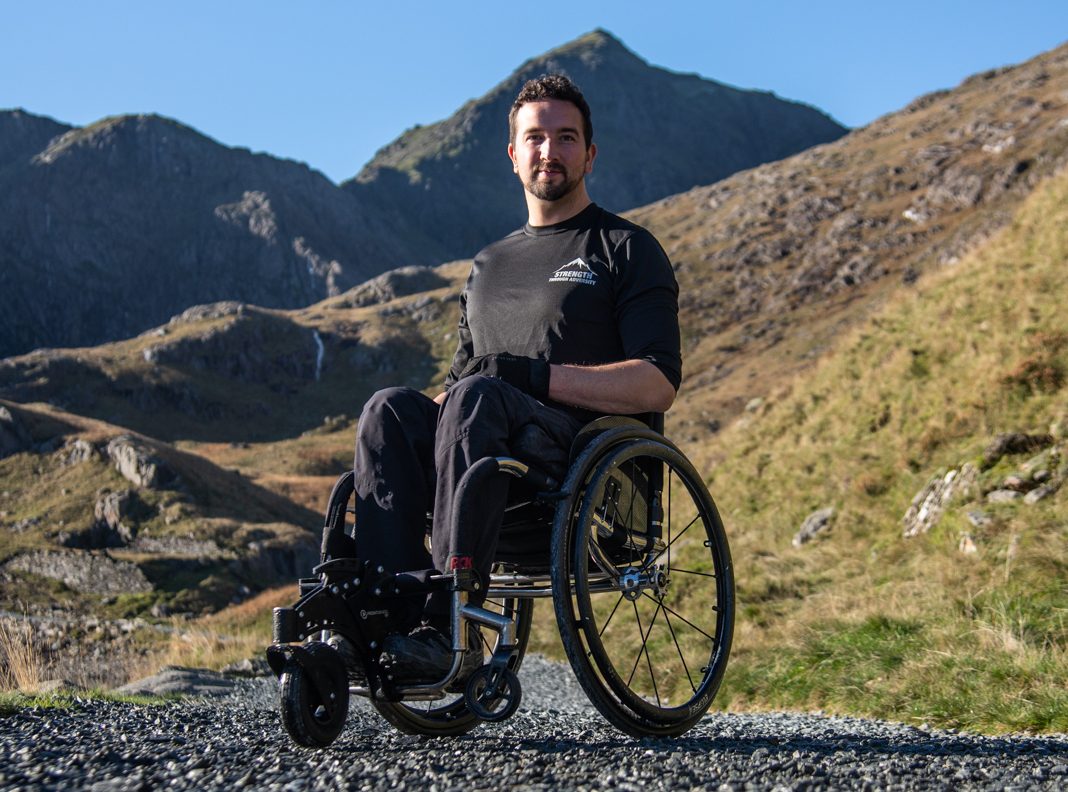 I soon came to learn that, upon landing, I had broken my back, instantly and permanently paralysing myself from the chest down.

My journey from surgery in the early hours of the next day, through to my lengthy rehabilitation at a specialist spinal unit would, in total, take five months. I was discharged on Christmas Eve 2016.

The dreams I’d had from a young age to climb the world’s tallest mountains, and ultimately my direction of travel in life had come to a major crossroads. My Spinal Cord Injury (SCI) would mean that I’d need to use a wheelchair for the rest of my life and would represent a major challenge to living the sort of lifestyle I’d aspired to – one of adventure!

In the years that have followed that fateful, yet so incredibly fortunate day, I have been on a journey to rediscover both meaning and purpose by becoming a disabled adventurer.

From learning to kayak in a local swimming pool (with a few too many capsizes to count), I have gone on to achieve things beyond what I ever thought possible for someone with a disability.

I’d once been told while still in rehab that I would be ‘wheelchair bound’ for the rest of my life, so I learnt to embrace sports like kayaking that would see me leave my chair in the distance and off in search of places a wheelchair would never get me!

Until my injury, I’d never really met or known anyone with a physical disability, let alone a spinal cord injury. How wrong my preconceptions about disabled people had been.

The real turning point in my journey had, in all truth, come from failure. Between 2017 and 2019 I chased the dream of competing at the Tokyo Paralympics in sprint kayaking, only to struggle with injury and ultimately failure.

I’d be lying if I said that I hadn’t struggled emotionally having failed in achieving this goal, particularly having worked so hard and prioritised it above all else – but failure is a wise teacher.

I came to the realisation that, had I not dared to achieve my lofty ambition to race at the Paralympics, I’d have not made such positive progress from my life-changing injury. Better yet, I knew that ‘failure’ could be a stepping stone for achieving something even greater.

It was against this backdrop and remembering the promise I’d made myself in the moments after my fall to never give up, that I came up with the idea that would change my life once more.

Would it be possible to kayak 1,400km from Land’s End to John O’ Groats? Twelve months of training later, I led a team of five injured or wounded veterans in the challenge of achieving just that.

A true ‘world first’. The single greatest and most challenging month-long adventure of my life.

We, the Kayak 4 Heroes team of myself, Ben Gallagher, Carl Simmons, Jonny Huntington, and Luke Wigman, wanted to take on the challenge to show that regardless of injury or disability, you can achieve anything with the right mindset. By working as a team, we achieved what many had said would be impossible. We’d faced long days at sea, moments of true peril and genuine uncertainty, but 26 days later we arrived into John O’ Groats.

I certainly couldn’t have appreciated it at the time, but leading the Kayak 4 Heroes expedition in the summer of 2021 raising £100,000 for the Armed Forces Para-Snowsport Team (AFPST), would lead to opportunities I could never have possibly envisaged. Once again, I found myself redefining the boundaries of what I thought possible for someone with a disability.

The World Marathon Challenge is an iconic global adventure that sees participants run seven marathons in seven days across seven continents – a challenge that has been achieved by fewer than 200 people throughout history.

Until now, this challenge hasn’t been attempted by anyone with a physical disability. That is about to change…

As of 25 October, I will be taking on the challenge of running the 42.2km marathon distance in Antarctica, Africa, Australia, Asia, Europe, South America and North America within 168 hours, or seven days, from my wheelchair.

Given that I’d only been invited to take part in the challenge less than six months from the event itself, and with plenty of doubters voicing their opinion as to whether I could successfully complete a challenge of this scale, I committed myself to training, and training hard!

The best bit about all of this is that before saying ‘yes’ to the opportunity, I’d never ran a marathon in my wheelchair, or since my injury.

But something inside of me told me to believe in my determination, grit, and ability to overcome the odds. There were no guarantees of success, and the list of why this might not work was certainly longer than the list of why it might (whether that be the risk of developing an injury to my shoulder, or things like pressure sores and bladder infections), but nothing ventured, nothing gained right?

By the time you read this, I will be deep into my training, with around one month left until I fly down to Antarctica to tackle marathon number one on the snow and ice of the world’s most southerly continent.

So, why am I taking on this challenge? First, and perhaps most importantly, it’s to show others that regardless of the challenges they face in life, it is so important that we make that commitment to ourselves not to be beaten, not to give up, and to emerge stronger.

Secondly, I’ve been given the opportunity to raise money for the Armed Forces Para-Snowsports Team charity, with hopes to raise £80,000 to pay for 25 newly injured servicemen and women to learn to ski for the first time.

In this exciting new series from Metro.co.uk, What It Feels Like… not only shares one person’s moving story, but also the details and emotions entwined within it, to allow readers a true insight into their life changing experience.