After bitter rollout politics, Coatsworth looks forward to the ‘summer after the pandemic’

Nick Coatsworth is at heart an optimist. It comes with a sunny disposition and a healthy dose of good looks.

The combination made him a natural to be the face of Australia’s COVID-19 response and vaccine rollout campaign. One that even by his estimations has exceeded all expectations, with the vaccination rate likely to exceed 90-plus per cent across the country.

And all this happened, he says, in spite of the bitter politics of the rollout. The lines were all too familiar: not enough supply, health authorities chose the wrong vaccines or they invested too heavily in AstraZeneca. 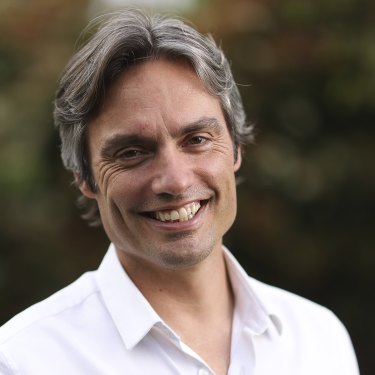 Dr Nick Coatsworth at his home in Canberra.Credit:Alex Ellinghausen

“But when they were called upon to do it, they’ve done it. The community just saw right through it all,” he says. “We will be the world leaders, or close to it, for vax rates. That can only be an enormous source of pride.”

The 43-year-old rose to national prominence last year as one of Australia’s deputy chief medical officers during the early stages of the coronavirus pandemic. An infectious disease and respiratory physician, he returned to his day job earlier this year and is now executive director of the medical services group at Canberra Health Services.

Coatsworth’s star continues to rise as an expert on television, radio and in newspapers. But while his straight-talking and unvarnished opinions have earned him high praise, they have also made him quite a few professional enemies.

Among the latter, some claim Coatsworth has been “focusing on himself rather than the argument” or operating in a “fantasy world”. Others say he’s “full of himself” and a “self-promoter”.

In May, he gave an explosive speech to the Royal Australian College of Surgeons, an edited version of which was published by The Sydney Morning Herald and The Age, describing commentary from a group of high-profile talking heads as “narcissism thinly cloaked as activism”.

Without naming names, Coatsworth’s speech also labelled the group a “hardcore rump of activist doctors” campaigning for the “false idol” of COVID-zero.

He followed that up with a July opinion piece that again criticised “risk-averse academics and medical commentators”, especially those who he argued had undermined confidence in the AstraZeneca vaccine.

In that piece, published amid the Delta outbreak in Sydney, Coatsworth also praised the NSW government for navigating a “middle road” on pandemic policy.

“The philosophy of the risk-averse experts is self-fulfilling,” he wrote. “Complain long enough that a government hasn’t gone hard and fast enough and eventually you will get it right, no matter how wrong you have been in the past.”

Coatsworth knew there would be some kind of cost for his remarks, but he wasn’t expecting what happened next.

In early August, 24 clinical academics signed a joint complaint to the Australian National University, where Coatsworth is an associate professor at its medical school, as well as the Royal Australasian College of Physicians over his commentary.

“I didn’t quite realise that they’d get together and write a letter signed by 24 of them complaining to ANU and to my own college of physicians. That was probably a pretty extreme response,” he says. 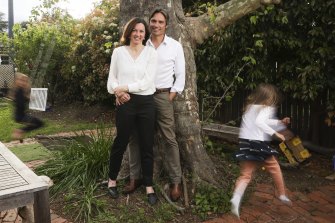 Coatsworth with his wife, Dr Rebecca Pearson, and children at home.Credit:Alex Ellinghausen

The identities of the academics remain confidential, but it isn’t hard to find experts Coatsworth has taken issue with over the past 12 months – on Twitter or in his regular media appearances – many of whom he says were critical of government policy from the beginning of the pandemic and never shifted.

Among those are Raina MacIntyre, the head of the biosecurity research program at the Kirby Institute at UNSW Medicine, ABC presenter Dr Norman Swan, health policy consultant Bill Bowtell, Professor Mary-Louise McLaws (an adviser to the World Health Organisation, whom Coatsworth stresses he respects greatly) and Nancy Baxter, the head of Melbourne University’s School of Population and Global Health.

Coatsworth is unhappy with the way the university handled the matter, saying he felt like he had “no support whatsoever”.

Adding to his unease about the situation was the later membership of Russell Gruen, the university’s dean of the College of Health and Medicine, and the university’s vice-chancellor Brian Schmidt, of OzSAGE, a group of clinicians and academics that aims to offer “well-researched and robustly debated independent expert advice”.

ANU said in a statement that “all concerned in this matter continue to exercise their right to free speech”. The university said it could not publicly discuss individual staffing matters, including complaints.

Coatsworth says he doesn’t hold a grudge but won’t hold back from challenging the experts, academics and commentators who have clashed with him during the past 18 months.

“I reckon I’ve probably sailed as close to the wind as any medical public servant has in pushing back,” he says. “But I really hope that that gave permission to other people who were really afraid.”

Coatsworth argues many of the critics who have slammed the approach taken by the nation’s key decision-making committee, the Australian Health Protection Principal Committee, could have been part of the process.

“It’s not as though they weren’t invited into the tent,” he says. “They were invited into senior advisory committees, they were briefed on a weekly basis on the vaccine rollout in late December, early January.

“These guys were all in the tent. And yet, when some of them got in front of the camera, they were just over-egging risk, criticising NSW and criticising vaccines. That was very problematic.

“It allowed people the psychological way out of getting a vaccine.”

One of the more public clashes with his peers came on the ABC’s Q+A program, when Michelle Ananda-Rajah, associate director at the Monash Institute of Medical Engineering, accused him of being “wrong” for suggesting there was debate about aerosol transmission of COVID-19.

Many of Coatsworth’s critics accuse him of leading the view among federal health authorities that airborne spread of the virus was not overly important. In one of his opinion pieces, he called that debate a “phoney war” and said policy had been adjusted “to reflect the realities of airborne spread”.

“When she said I was wrong, it didn’t acknowledge any of the work we had done in progressing thinking within government about the aerosol issue,” he says. He says his team moved Victorian policy in July last year in consultation with the state’s Chief Medical Officer, Dr Andrew Wilson, and “two days later we moved federal policy”.

“I was also the architect of the National Evidence Taskforce infection control review group which was announced in September 2020.”

Dr Ananda-Rajah, now Labor’s candidate in the inner-city Melbourne seat of Higgins, also raised concerns that night on Q&A over the efficacy of the AstraZeneca vaccine, saying some of her colleagues viewed it as inferior.

It left Coatsworth furious, and he has devoted a huge amount of energy in the months since promoting the safety and effectiveness of the treatment. 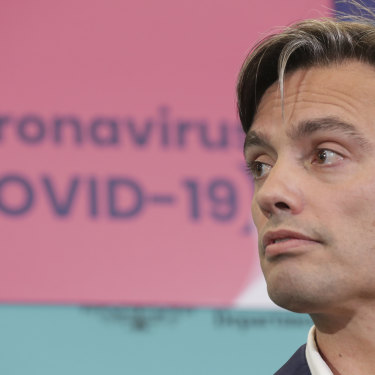 Coatsworth’s positive disposition made him an obvious choice to be the public face of Australia’s vaccination awareness campaign. Credit:Alex Ellinghausen

“You’ve got this group of quite prominent people in the academic world who really were having a crack at the AstraZeneca vaccine,” he says. “It was fundamentally based around a fear proposition and that allowed maybe more radical messages like the vaccine was the wrong choice.”

Coatsworth has again attracted criticism for pushing back against those calling for vaccination of children under 12. He argues “no serious thinker in paediatric infectious disease and immunology” believes that is a straightforward decision.

“You’ve got these folk who have been sort of either been propped up by their egos or their echo chambers, thinking that they have some sort of right because they have a medical degree behind them, to come out and say this sort of stuff,” Coatsworth says.

“I genuinely think that kids have been the forgotten group of the pandemic and that’s why I get so exercised at those who say kids are at risk, kids are going to be the reservoir for infection, kids are going to infect their grandparents. Like, come on. Kids are the ones that have suffered the most.”

Now the country is largely vaccinated and the pandemic is moving into a new stage, Coatsworth is hoping for a quieter time ahead with his wife Rebecca Pearson, a respiratory physician, and their three children. He wants them to remember the coming months as “the summer after the pandemic, when dad stayed home all holidays”.