Thousands of Afghans married to Australians are in limbo after the federal government said they would still require health checks to finalise visa applications to exit the Taliban-controlled country.

One of those is Said Mosavi’s wife Parisa, who he hasn’t seen for three years.

They married in Afghanistan in July 2018 and lodged a partner visa application that December, with the paperwork including evidence of Parisa’s health. But she needs a new medical examination because the one lodged nearly three years ago had expired. 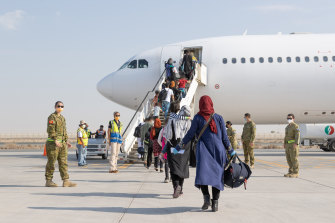 Australian forces evacuated more than 4000 people from Afghanistan last month but thousands are still waiting for visas to be processed.Credit:ADF

Home Affairs data shows that at the end of June, it had 7706 provisional partner visa applications on hand lodged by people in Afghanistan. Nearly three-quarters of these were lodged in 2018-19 or earlier.

The department advised Labor MP Julian Hill, to whom Mr Mosavi turned for help, that people who had already applied for family visas still had to meet legislated requirements including health checks.

It said it was aware access to some services were restricted in Afghanistan and it wouldn’t ask people to seek health checks right now. Policies regarding visas in Afghanistan had evolved quickly as the environment in the country changed.

Mr Hill said his office has heard from a dozen people with partners in Afghanistan waiting for health checks, while Mr Mosavi said he had many friends in a similar situation.
But at this stage the department is still requiring health checks to finalise the thousands of visa applications lodged before the Taliban retook Afghanistan.

About a month after their wedding, Mr Mosavi had to return to Australia where he owns a landscaping business in Narre Warren in Melbourne. He also has responsibilities to look after his three siblings who have genetic conditions.

Mr Mosavi hasn’t been able to return to see his wife, with a planned trip in 2019 postponed after her father died and then Australia’s international borders closed because of the COVID-19 pandemic. This year, he’s watched on as the Taliban took over Afghanistan and supported his wife from afar.

“She’s doing okay, but because the surrounding is just not as healthy as it should be it’s affecting my missus. And that’s why I’m trying any possible way to get her out.”

On July 30, the Department of Home Affairs informed the couple it was close to finalising Parisa’s partner visa application but she needed to have a new medical examination.

Mr Mosavi said it was the only thing outstanding for the visa but Parisa’s appointment for an examination in Kabul coincided with the day the capital fell to the Taliban.

“My wife described that day as a zombie land, everyone in their homes seeking shelter and safety,” he said.

He’s asked the department to waive the health examination requirement or allow it to be done in Australia.

“The department’s insistence on these health checks, that they fully admit are now impossible to have done in Afghanistan, means the wives, husbands and children of thousands of Australians are being abandoned by the Australian government,” Mr Hill said.

“I call on the minister to intervene, impose some common sense on the department and find a solution given the exceptional circumstances in Afghanistan. The human impact is heartbreaking and time is of the essence.”

The federal government evacuated 4100 Australians and Afghans at the end of August, including many granted emergency visas, before the security situation deteriorated.

The Refugee Council of Australia has called for a special intake of 20,000 people from Afghanistan in light of the Taliban’s return.

The department did not respond to questions from the Herald and The Age.