ABC chairwoman Ita Buttrose says it is a mistake to leave her powerless in choosing ABC directors, with government delays in filling three vacancies almost leaving the board short when a member was attacked by cow.

Speaking at the National Press Club, Ms Buttrose said she was “concerned” the ABC board had been reduced to just four board members due to unfilled vacancies – the number it needed for a quorum. 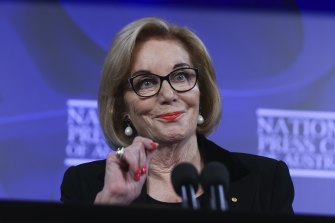 ABC chairwoman Ita Buttrose has urged the government to fill board vacancies saying the broadcaster is at risk of failing to make quorum. Credit:Alex Ellinghausen

She also shut down questions about the broadcaster’s legal battle with Industry Minister Christian Porter, who is suing the ABC for defamation over its reporting of a historical rape allegation he vehemently denies.

Ms Buttrose responded tersely when asked by a journalist if she’d had oversight of the article at the centre of the defamation case – or whether it could have been reported in a way that minimised taxpayers’ exposure to costly legal action.

“You are not really serious about that question, are you? You know the case is before the court and I simply cannot comment one way or the other.”

The article, by investigative reporter Louise Milligan, did not name Mr Porter, but triggered a deluge of reporting from other media outlets and Mr Porter outed himself as the minister at the centre of the allegation days later.

Ms Buttrose was at the Press Club in her capacity as patron of the Macular Disease Foundation Australia, but her keynote speech was overshadowed by questions about the ABC’s turbulent relationship with the federal government.

The government has left two board positions vacant for six months – created by the departure of directors Kristin Ferguson and Donny Walford last November – while a third director, Vanessa Guthrie resigned in March part-way through her five-year term.

“I would appreciate getting some new directors because we only just make a quorum,” Ms Buttrose said.

“I said to my fellow members the other day ‘for god’s sake don’t get sick anybody, otherwise we will be in a lot of strife’.”

Ms Buttrose said the board had already had a close call after one board member, who is based in rural Queensland, was attacked by a cow.

“I had no idea cows were so awful, but anyway, she had terrible leg injuries,” Ms Buttrose said. “But unexpected things can happen.

“I’m sure the fact that it’s been raised here today will be a reminder to government that, you know, there is a shortage of directors and we look forward to hearing who they might be.”

Ms Buttrose also said she had told Communications Minister Paul Fletcher it was a “mistake” the chair of the board was not given a say in the appointment of directors. 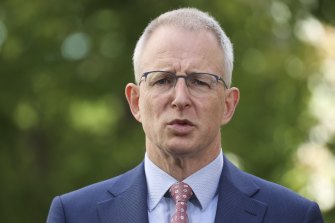 “I don’t know chairs of other companies who have no input into the composition of their board,” Ms Buttrose said.

“I do think the chair of all Commonwealth entities should have some input into who the directors are, because as chair you know where you need to plug up a few gaps, you know what you’re looking for, and it doesn’t make any sense to me that the chair isn’t included in the decision-making.”

Mr Fletcher is sitting on a shortlist of candidates who have been vetted by an independent panel, which is required to provide the government with three potential board members for each vacancy. However, there is no legal obligations for Mr Fletcher to accept the panel’s recommendations and the Coalition has routinely ignored them in past and appointed their preferred candidates.

A spokesman for Mr Fletcher would not confirm when the appointments would be made, saying only the process was “proceeding”.