With New Show, a Broadway Rarity: Season Has 7 Plays by Black Writers

“Chicken & Biscuits,” a new comedy by Douglas Lyons, will star Norm Lewis and Michael Urie. Performances will begin on Sept. 23. 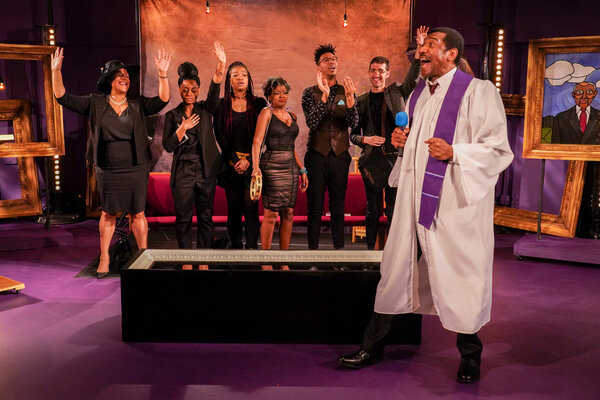 Plays by Black writers have been few and far between on Broadway over the years. The coming season will feature at least seven.

The latest entrant is “Chicken & Biscuits,” a new comedy that last year ran for two weeks at Queens Theater before the pandemic forced it to close.

Much of the creative and producing team will be in leadership roles for the first time on Broadway — the playwright, Douglas Lyons, was previously in the ensemble of “Beautiful” and “The Book of Mormon,” while the director, Zhailon Levingston, is an assistant director of “Tina: The Tina Turner Musical.”

Onstage, there will be some familiar faces: Norm Lewis and Michael Urie, both well-known and well-liked by theater audiences. Lewis, a Tony nominee for “Porgy and Bess,” is best known as a singer, and this will be his first Broadway play; Urie is on more familiar ground as a comedic actor, and he was featured in a virtual reading of the play during the pandemic.

Three of the show’s lead producers, Pamela Ross, E. Clayton Cornelious and Leah Michalos, are in that role for the first time. A fourth, Hunter Arnold, has producing credits on 29 shows, and is one of the lead producers of “Hadestown.”

These plays arrive at a time of intensified attention on racial inequity in many corners of society, including the theater industry. Lyons founded the Next Wave Initiative, a scholarship program for Black theater artists; Lewis is a founding member of Black Theater United; and Levingston is the director of industry initiatives for the Broadway Advocacy Coalition. The coalition will be recognized with a special Tony Award this fall.

“Chicken & Biscuits,” which is about a family that gathers for a funeral and is forced to reckon with a secret, is scheduled to start performances Sept. 23 and to open Oct. 10 at the Circle in the Square Theater. The play will be the first to move to Broadway from Queens Theater, a nonprofit performing arts center in Flushing Meadows Corona Park.

“This show was the one that Covid-19 interrupted for us,” said the theater’s executive director, Taryn Sacramone. “To go from that moment — abrupt shutdown — to now seeing ‘Chicken & Biscuits’ move to Broadway in this moment of reopening for the city — this feels incredibly meaningful.”

The other plays by Black writers scheduled to run next season are “Pass Over,” by Antoinette Chinonye Nwandu; “Lackawanna Blues,” by Ruben Santiago-Hudson; “Thoughts of a Colored Man,” by Keenan Scott II; “Trouble in Mind,” by Alice Childress; “Clyde’s,” by Lynn Nottage; and “Skeleton Crew,” by Dominique Morisseau.