MONTCLAIR, N.J. — The choreographer Elizabeth Streb has found herself in foreign territory. First, she is collaborating, which is not her usual way of making art. And in teaming up with Anne Bogart, a director of the theater group SITI Company, she has something else to contend with: words.

“I don’t really work with words,” she said between rehearsals at the Alexander Kasser Theater at Montclair State University here. “I don’t know how to do that.”

Ms. Streb has built a repertory and a reputation creating action works that strive to defy gravity. Give her and her company, Streb Extreme Action, a platform 30 feet in the air to leap off, a sheet of plexiglass to crash into, or a mat to land on, face forward, with a splat, and they’re right at home.

But in “Falling & Loving,” which begins on Tuesday as part of the series Peak Performances, Ms. Streb isn't the only one in charge. She has teamed with Ms. Bogart to direct the production, which features six SITI actors and six Streb dancers, who do not speak.

On one side is Ms. Bogart’s ability to explore the emotion behind words and movement; on the other is Ms. Streb’s courage and single-minded conviction to create human daredevils. Together, and with the performers, they grapple with what happens when action, ideas and objects mix and mingle, courtesy of Ms. Streb’s latest invention, which she calls the Guck Machine. 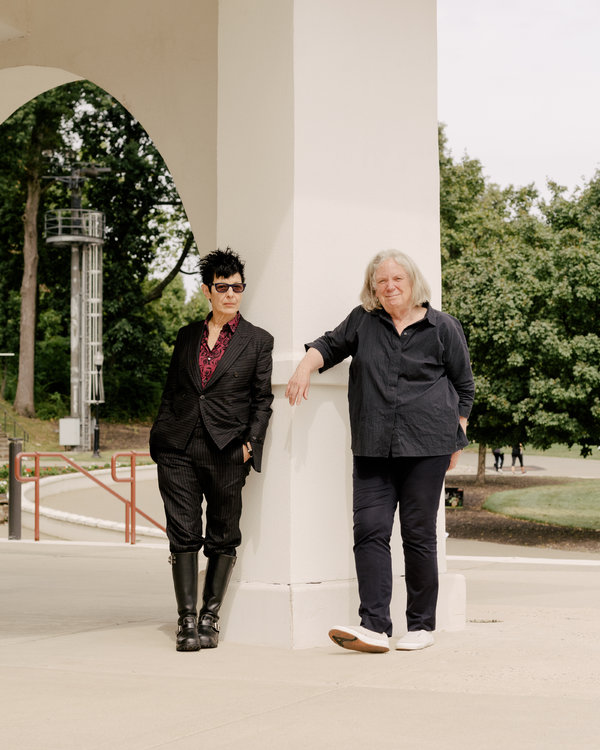 Built by Hudson Scenic Studio and hovering high over the stage, the machine features 52 five-gallon buckets attached to strings that the performers pull throughout the work; those containers release substances like water, molasses, flour and feathers. When the cast and the buckets are in action, it creates a mess that is both straight-up beautiful and incredibly funny.

There are also bowling balls attached to cables that swing back and forth. Dodging them is an art.

But there is another, more loving side to this nonlinear production, which was the brainchild of the playwright Charles Mee, a member of SITI, who originally contacted Ms. Streb about working together. His text, recited by the actors, adds a romantic, poetic layer to the action, as in this apt line: “You take me to a world that frankly seems not altogether rational to me.”

The show, full of danger and whimsy, is structured around the seasons, courtesy of Mr. Mee’s words. “It goes spring, summer, fall, winter, spring,” Ms. Bogart said. “In terms of the text, it starts out pretty sweet and then it gets really dark and comes back again.”

It was Ms. Streb’s idea to involve Ms. Bogart. “We have circled around each other for decades,” Ms. Bogart said. “It’s mutual admiration.”

Now they’ve ended up in the same place, where the dancers and actors “meet in this new world,” Ms. Bogart said. “Little by little, they mix and get dirty together, and then they celebrate. The last scene I really love: It’s a celebration.”

Recently, the pair elaborated on the fun and the horror of guck, the pleasure of their first collaboration and the splendor of making a mess.

What follows are edited excerpts from that conversation.

Do you think that falling and loving are related to real life and the time that we’re living in?

ELIZABETH STREB I do. For me, the encounter with the guck and the bowling balls and artificial setups for making passage more difficult and increasingly dangerous is really a metaphor for life.

ANNE BOGART I think there is a story: Life is really messy.

What are you after ultimately?

STREB My dream is that we make actions that everybody understands. How do you create something that’s like passing someone on the street who wears your mother’s perfume? It does a sensorial thing. It doesn’t need to be translated.

I think action is an experience that’s not a story. The things we have put together — Chuck’s words, Anne’s direction and what Streb is doing — is of a oneness and is real life.

What is the Guck Machine all about?

STREB There’s everything — flour, sugar, water, molasses, mylar confetti, regular confetti, feathers, paint balls, Jujubes, sprinkles, popcorn, et cetera — and once everything coagulates on the ground, it makes guck. I was interested in the viscosity of things falling, and trying to create a sonic array in this square hunk of space between the bottom of the buckets and the floor.

BOGART Each time you pull a string, some stuff comes down.

STREB The guck falls at different rates. Some fans out. Molasses goes straight down. Water falls kind of laconically and then splashes. But even more are the humans encountering it. The dancers have to pull these strings while they’re flying, while they’re avoiding the bowling balls, or while they’re landing and getting up. It creates an impossible situation that I can’t choreograph. They could be slipping all over the place. They still have to do their job and not get hit.

BOGART It’s really beautiful when it comes down.

STREB The dancers and the actors deal with it majestically and hilariously. No one wants guck on their head. It’s really annoying.

BOGART And the dancers and the actors are together in a very particular way — you see relationships, and they’re very moving.

What is the “Loving” part of the title?

BOGART It has a lot to do with Chuck Mee. Chuck is obsessed with love. But there’s stuff falling, and there’s a lot happening, and I think what keeps the heat going is love. I think the companies are slowly falling in love with each other.

What appealed to you about working with Elizabeth on this project?

BOGART I have a company, and they’re getting older. We’ve been together 27 years, and at a certain point, you say: “O.K., you’re making things in service of what? Why? Why do a play?” I’ve become interested in the idea of creating communities. What kind of community would you create if the Streb company and SITI Company come together?

Elizabeth, you can deal with the text?

STREB I’m moved when they’re talking, and usually I’m annoyed when people talk. With language — it’s like they have to get to the end of the sentence before the content drops or sinks in, and then somebody else is going to answer, and I’m always like, ahhh. But with Anne, they speak physically. I felt if any two languages could go together, it would be Bogart and Streb.

How are the actors dealing with the Streb dancers?

BOGART They were very nervous at first at the prospect of doing it. They said: “We don’t leap from high places. We don’t know how to smash into things.” And they were scared about the guck. But what happened — and it’s a lot because the dancers are so gracious with the actors and are working them into the training a little bit — is that the actors sort of get into it. They are giving themselves into the experience.

BOGART They do a bit of a PopAction class every morning. The actors get it quickly because they’re used to dealing with balance issues and compression of the body. They know how to make themselves compact.

STREB And they can handle a little bit of impact, which most people rush away from. I think it’s a foreign sensation, and you have to get used to it, and then it becomes something you get addicted to. We have a battle cry now: “Sooner, harder, higher, faster.” Once you do that, you get to my pursuit: the elixir of temporality of action, not language.

BOGART When you’re saying, “Faster, harder,” it makes me think of something in acting. I think why theater is boring a lot is that actors are trying to prove the transitions from one state to another, but what they can do is be in one state and jump to another.

What do you have in common?

BOGART And an insatiable desire for other experiences. I think our job is to be constantly confronted with our own assumptions that we carry with us. That is the thrill of the other, so she’s the other for me.

STREB And I think what we make — this isn’t pretend. This is action. It’s real. It’s an experience.

Gia Kourlas is the dance critic of The New York Times.