Watching From a Distance: What Gives a Virtual Dance Life?

The pandemic has handed dance a particularly rough year. “The floor was taken out from where we stand,” the choreographer Alexei Ratmansky says in a new video unveiled on Tuesday night. “So we need to find this ground again and find the audience, find ourselves.”

“A.B.T. Live From City Center: A Ratmansky Celebration,” which includes a new ballet, is a step toward that: His dances have found solid ground in the form of a stage. And as the respected artist in residence at American Ballet Theater, he knows his way around one. But how does dance live without an audience? And how can dancers, especially those in ballet who are so used to being seen, reclaim their identities?

If we’ve learned anything in a year when most live performance has been shuttered, it’s that virtual dance — especially when it’s treated like an ordinary performance — is tricky to pull off. In Ratmansky’s premiere, “Bernstein in a Bubble,” as well as the other works on the program, including the Rose Adagio from “The Sleeping Beauty,” the lack of an audience is acutely felt. 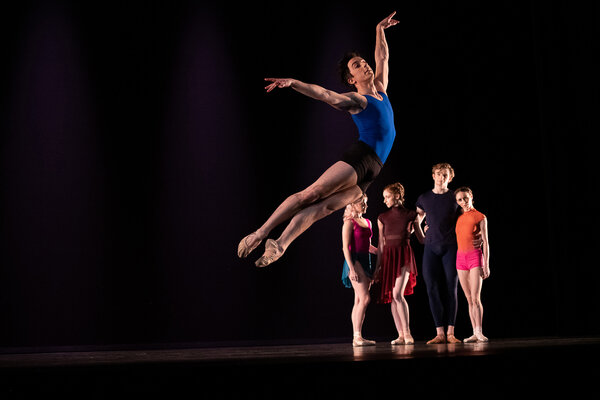 The connection between spectator and dancer may not be physical, but it creates a line of energy that completes the vibrancy of a ballet. In this production, we are being led not by the choreographer but by the camera. And it doesn’t always take you where you want to go.

For the program, produced by New York City Center, Ballet Theater and Nel Shelby Productions, the performers were shot in multiple takes and from a variety of angles, with five cameras. This means views fluctuate from near to far and everything in between. What’s disconcerting — and, worse, dizzying — is how the vantage point changes in the blink of an eye. Dancers disappear into shadows. Details blur as the camera pans back and forth; suddenly, it’s much too close. We lose fingertips, feet — those essential parts of the dancing body.

A camera can do one of two things: obscure a dance or enhance it. Ratmansky’s latest, set to Leonard Bernstein’s brisk “Divertimento,” has an air of American optimism and heroism along with the idea that drive and spirit are more than enough to save the day. An antidote to the times? Sure. But do I buy this veiled version? Not really.

“Bernstein in a Bubble” has its share of quiet moments, but the main feeling is one of playfulness for the cast: Skylar Brandt, Catherine Hurlin, Cassandra Trenary, Aran Bell, Patrick Frenette, Blaine Hoven and Tyler Maloney. Ratmansky embellishes his choreography with enjoyable details — the women, first raising their knees tap the tip of their pointe shoes onto the stage with relish — but there is also, periodically, a sense of the dancers slipping in and out of sync, of not quite knowing where to look. From its overly cute title to the abruptness of the scenes, “Bernstein” feels superficial. And despite its energy, there’s little momentum. It might be the film and not the dance, but does that matter? This is a film of a dance.

Book-ended by the image of six performers gathered around the towering Bell — who, occasionally, is also the odd man out — “Bernstein in a Bubble” has an episodic quality as it responds to the mood and energy of the short suites. A gentle male trio, in which the dancers lean forward in an arabesque and cascade to the floor, eventually leads to them sitting like sculptures, propped up on a straight arm and gazing down.

Women enter skimming the stage en pointe before swapping their ethereal lightness for an ordinary walk. The men rise toward them, but are brushed off; the women find Bell, their protector. But soon enough, he is left alone in the darkness. (Again and again, I caught a whiff of the modern master Paul Taylor.)

The stage also rains with duets: Frenette shadows Bell in a meditative sequence, while Trenary and Hoven, more fiery, exit with a supported cartwheel and a deep, arching dip of the hips. Later, Bell — to bluesy, sensual music — spins Hurlin around the stage, before lifting her up high and dropping her, not to the floor, but into his arms.

The lively ending attempts to tie it together by showing the community of the group. But while “Bernstein in a Bubble” has its share of tender and courageous moments, it doesn’t feel lived in enough to really know what its entirety is.

There was nothing incomplete about another dance-video experience, this one by the contemporary choreographer Netta Yerushalmy, Presented by Wexner Center for the Arts and Los Angeles Performance Practice on Tuesday, “Distant Dance Demonstration: Movement in Unison and Not for Those in Need of Art” records and expands on a live, unauthorized performance held in September at the East River Park Amphitheater.

Here, the filmmaker Jeremy Jacob, credited with creating designs for the screen, illuminates the dance with color blocking techniques and animation — yellows and pinks wash over the performance — and inserts still photography by Maria Baranova. The dancers wear sneakers — performing footwork that is rigorous, detailed, imaginative — as they move from the stage to surrounding bits of grass and dirt.

This film, in essence, preserves not only a dance but a place — the amphitheater, whose proposed demolition is a part of plans to elevate and reconstruct East River Park to protect it from damaging coastal storms. (The plan is not universally popular.) It also represents a moment in time when, despite the pandemic, a choreographer and her dancers, seven in all, rehearsed in a park and performed for an invited crowd and anyone else who felt like stopping by.

Beyond the open arch of the amphitheater are joggers, cyclists, walkers; past that is the rippling water of the East River. Occasionally cameras pan back to see a casual crowd watching, but as the dancers pair up and abruptly go their own way moving with an internal urgently, it’s as if the city is their audience.

Because of the camera — and not despite it — this is a dance that breathes. Most important, it feels like you’re looking out of a window instead of at a screen. At 27 minutes, “Distant Dance Demonstration” might not be, as Yerushalmy said in her live introduction “fast or fun or polished.”

What it is: An absorbing, soulful recreation of time and place that evokes the isolation of this time. Remember the end of summer when the heat and light couldn’t soften the sorrow and confusion of the world? “Distant Dance Demonstration” was a rare live performance, but now it’s also more than a dance. It’s a piece of history, a marker of time and, yes, it is very much alive.