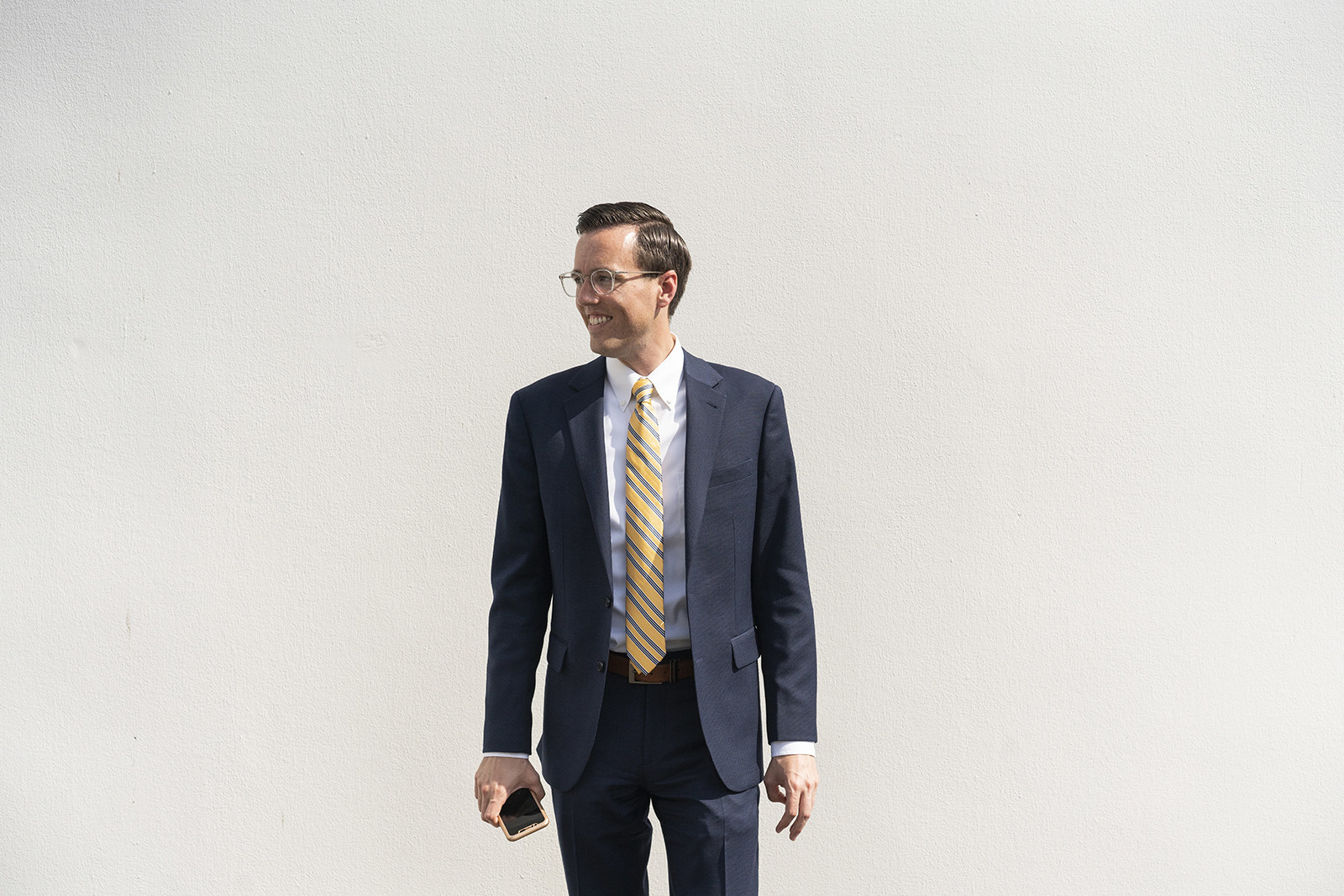 A few Saturdays ago at the Washington, DC pride parade, Judd Deere was just one of the gays. In khaki shorts and a pastel shirt, he linked arms with his boyfriend to pose in front of a rainbow flag.

But in a city where President Donald Trump got only 4% of the vote, Deere was actually quite unlike the rest of the crowd, who wore “Fuck Trump” buttons as they excoriated the president for an anti-LGBTQ agenda. When a small contingent of gay Republicans marched in the parade, they were greeted with loud boos.

Had other Pride-goers known who Deere is, he might have been booed himself. Deere is not only a gay Republican but also a prominent West Wing aide to the president of the United States. Since January, he has served as Trump’s deputy press secretary, speaking regularly for the president on domestic matters — including LGBTQ issues — from his desk, steps from the Oval Office.

“I’ve clearly been hired, and promoted since I’ve got here, and I’m completely open about who I am,” said Deere, who grins wide and speaks with an Arkansas lilt. With a limited crew on deck in Trump’s communications shop, he’s been loaded with high-exposure responsibilities, briefing reporters this month on Trump’s call about ICE raids with House Speaker Nancy Pelosi, NATO, a summit on social media, affordable housing, the congressional picnic, Trump’s golf schedule, and more.

“These individuals that I work with in this building don’t treat me any differently because I’m gay,” Deere said in an exclusive interview with BuzzFeed News, adding that he works with the president personally many times a week, and “he doesn’t treat me any differently because I’m gay,” either. However, Deere admits, despite sharing his social life freely in the West Wing, he’s not sure if the president actually knows how he identifies.

The fact that gay men can rise through the ranks in the White House, Deere argues, proves the president likes LGBTQ people (despite a litany of policies and positions that target them in workplaces, hospitals, shops, homeless shelters, and more).

Deere had previously served as a spokesperson in the Arkansas attorney general’s office when it asked courts to block same-sex parents from listing both of their names on a child’s birth certificate and to strike down Fayetteville’s LGBTQ nondiscrimination ordinance. After he came out at the age of 26, he was still welcomed by Republican politicos.

Deere’s boss, Sarah Huckabee Sanders, the outgoing press secretary who announced her plans to step down on June 13, told BuzzFeed News in an email, “I focused on hiring the very best people, and that’s why I hired Judd. I am proud to have him on our team to help on LGBT issues as well as the many others in his portfolio.” 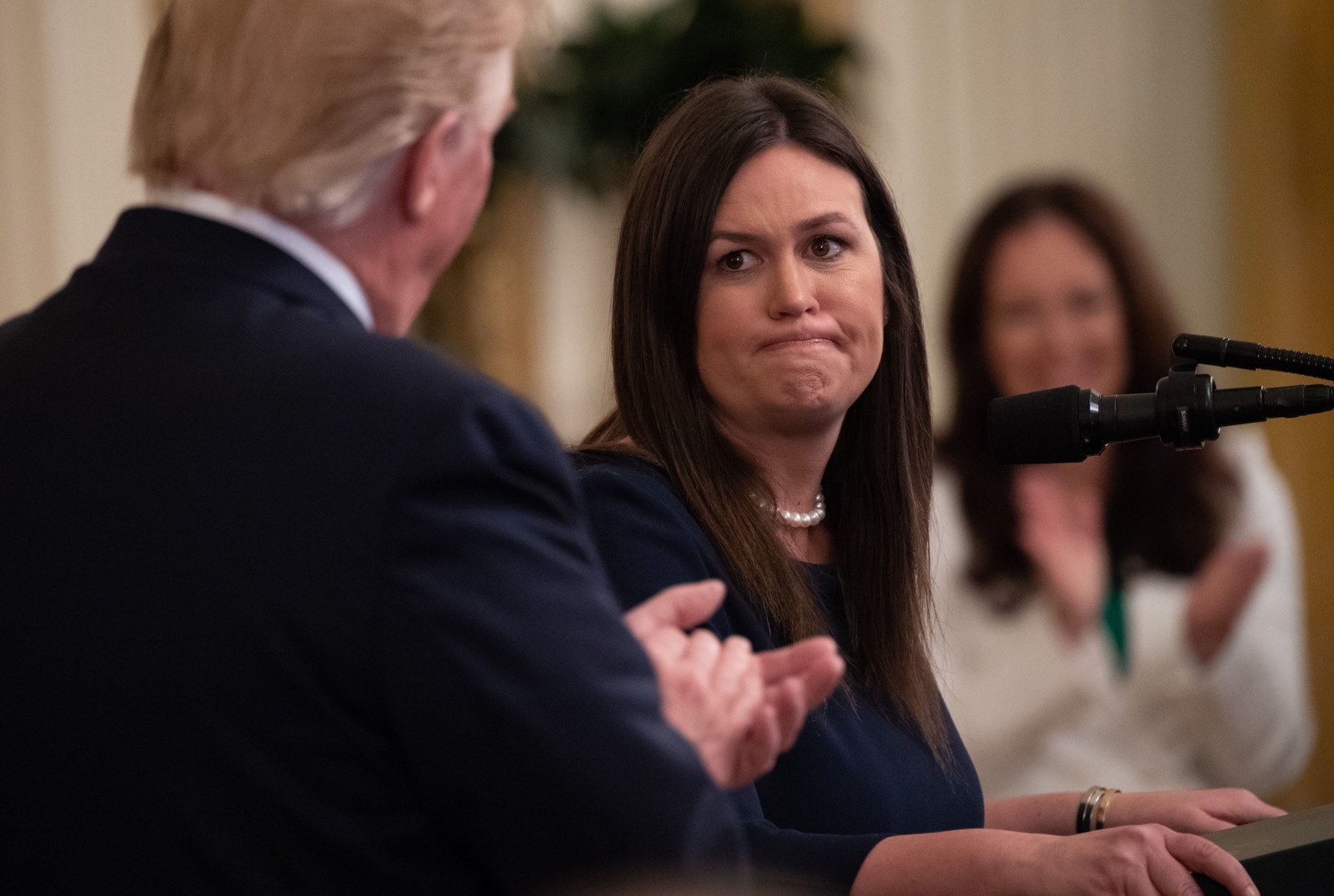 Other gay men in the administration include Ric Grenell, the US ambassador to Germany, who has made a brand as a brash, openly gay Trump loyalist. But prior to this interview, Deere had been low-key about his own ascent, even as he helped release the president’s LGBTQ pride statement, which criticized other countries for executing gays.

The rise of some gays in Trump’s orbit tracks with a trend of growing conditional acceptance within conservative circles, such as events featuring gay men held at the Metropolitan Republican Club in New York City and the Capitol Hill Club in DC. The ostracizing and icky smears of yore about homosexuals being diseased and immoral have largely given way to limited social tolerance.

Conservatives can be fine having gay Republicans around — particularly white gay men, who reflect the same bloc that makes up Trump’s white male base. These gay people enjoy a retractable leash that gives them access to social networks and power — as long as they share other Republican priorities, like a border wall and gun rights, and don’t dwell on their sexuality or gay rights. In this arrangement, conservatives can be accommodating to gay people, provided it remains legal to discriminate against them.

These opportunities are rarely, if ever, afforded to transgender people, whom conservative campaigns still sometimes portray as dangerous sex predators and sickly head cases.

Trump won over gay Republicans by carrying a rainbow flag onstage when he first ran for office and acknowledging that same-sex marriage is the law of the land. But he has since pursued anti-LGBTQ policies and is deeply unpopular with LGBTQ Americans overall — 81% disapprove of the job he is doing. Trump has banned transgender people from joining the military by arguing they seriously burdened the armed forces — despite a previous Pentagon-backed study that found the opposite — and reversed a policy that said transgender students could use bathrooms that match their gender. The adminstration now seeks to fund religious adoption agencies that refuse same-sex parents and is planning a rule to let religious federal contractors sidestep nondiscrimination orders.

Deere’s defense of Trump on LGBTQ rights — like many gay Republicans’ — rests on a vivid conviction: None of the president’s stances are actually discriminatory.

The transgender military ban? A matter of troop combat readiness. Policies to protect religious health care workers who deny services? That merely preserves conscience rights. Arguing that a Christian baker can refuse a wedding cake to a gay couple?

“Yeah, that’s fine,” said Deere, who said the baker would have sold the couple a cake for any other purpose. “I’ll just go find another cake shop that will.” 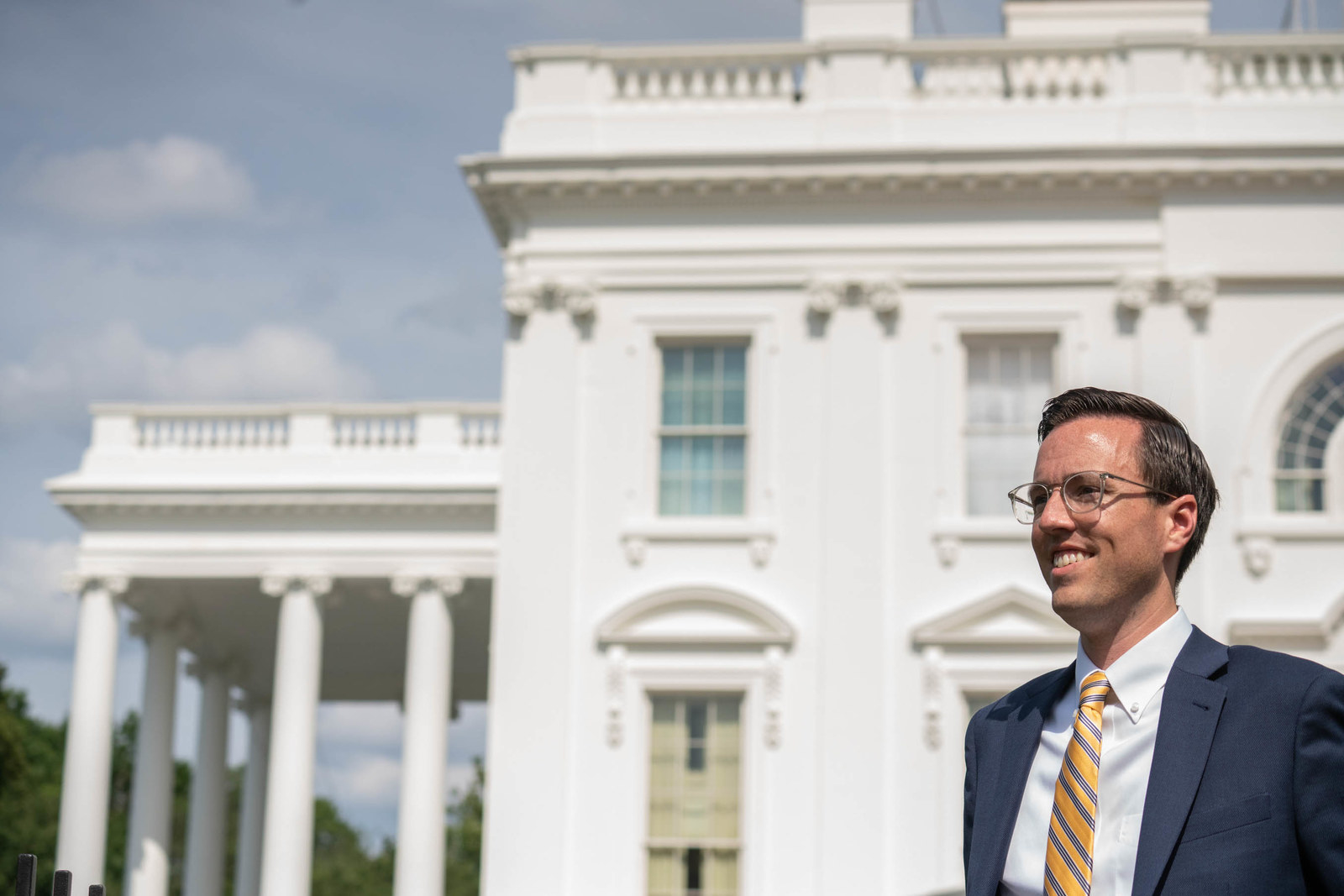 While Deere was at DC pride, a reporter for the Daily Caller, a conservative media outfit, was also there filming a video and asking attendees, “What do you think is the biggest threat to gay rights in America today?”

“The biggest threat is the Trump administration,” one man said.

A woman answered, “All [Trump] cares about is white straight people.”

The Pride-goers are not alone in seeing the Trump admininistration as a threat to LGBTQ people. “There is no question that the administration has been, on the whole, hostile to the LGBT population,” said Adam Romero, director of legal scholarship federal policy at the UCLA School of Law’s Williams Institute, citing what he called “outright discriminatory policies.”

The Trump administration has not only targeted LGBTQ people, he told BuzzFeed News, but has also stopped researching that population. “The administration has gone so far as to roll back the mere collection of data about victimization of LGBT youth.”

Deere, for his part, disagrees.

“The president opposes discrimination and hates violence, all of that, in any form,” he said. Deere said transgender people “erode military readiness” and the ban “was developed through extensive studies within the military by senior military officials.” (Trump’s top general was surprised when Trump announced a ban on Twitter.)

Deere also backed Trump’s opposition to the Equality Act, a bill that would ban anti-LGBTQ discrimination nationwide, which he said is currenty “filled with poison pills.”

“He’s been very clear that he’s going to protect the conscience rights of all Americans,” Deere said of his boss, echoing an argument that adding LGBTQ people to civil rights laws would force religious business owners to forfeit their constitutional freedoms. “If the Democrats really want to work with us on passing the Equality Act, then they should actually work with the president.”

Gay Republicans these days seem to embrace a sort of cognitive dissonance. They tend to tweeze out Trump’s LGBTQ-friendly gestures and display them like Baby Simba while sweeping the rest under the rug.

Like the religious right, many gay Republicans fear that LGBTQ laws entail repercussions (hampering religious liberty, allowing transgender women to compete in women’s sports) and are largely unnecessary — gay Americans aren’t persecuted and killed like gay people in other countries. Insofar as LGBTQ rights do matter, Trump is better than other Republicans, they argue. And they find it baffling when the LGBTQ community rejects them over their politics — even if their politics cultivate and allow discrimination against the community.

“The left tends to preach complete and total equality except for when you don’t agree 100% with them on every issue,” Deere said.

Asked what Trump has done specifically to support the rights of LGBTQ Americans, Deere noted, “He’s launched a global campaign to decriminalize homosexuality.” (That effort could help LGBTQ Americans who are overseas.) He also cited the president’s pledge to end the HIV epidemic by 2030 — a goal, health experts say, that is doable, but that Trump cannot accomplish unless he stops stigmatizing transgender people and immigrants.

“It would be a groundbreaking achievement for the LGBT community across this country,” he said. “I mean, this is a Republican president doing these things.”

Considering what he believes to be Trump’s LGBTQ achievements, Deere bristles at arguments that the administration is actually anti-LGBTQ. “The left really wants to continue to push what I consider to be a disgusting message that LGBT Americans are threatened under this administration,” he said. “It’s just a smear campaign.”

He is also prepared for backlash from this article. “They’re going to say that I’m helping the enemy,” Deere said. “That’s because I don’t agree with them 100% on all issues — they think that I’m in the wrong because I’m a Republican who also happens to be gay.

“They can get mad at me,” he continued. “I don’t go into a dark depression because somebody hates the person I work for, or wants to get upset at me because they think I’m crazy for working here, because it just doesn’t matter to me.” ● 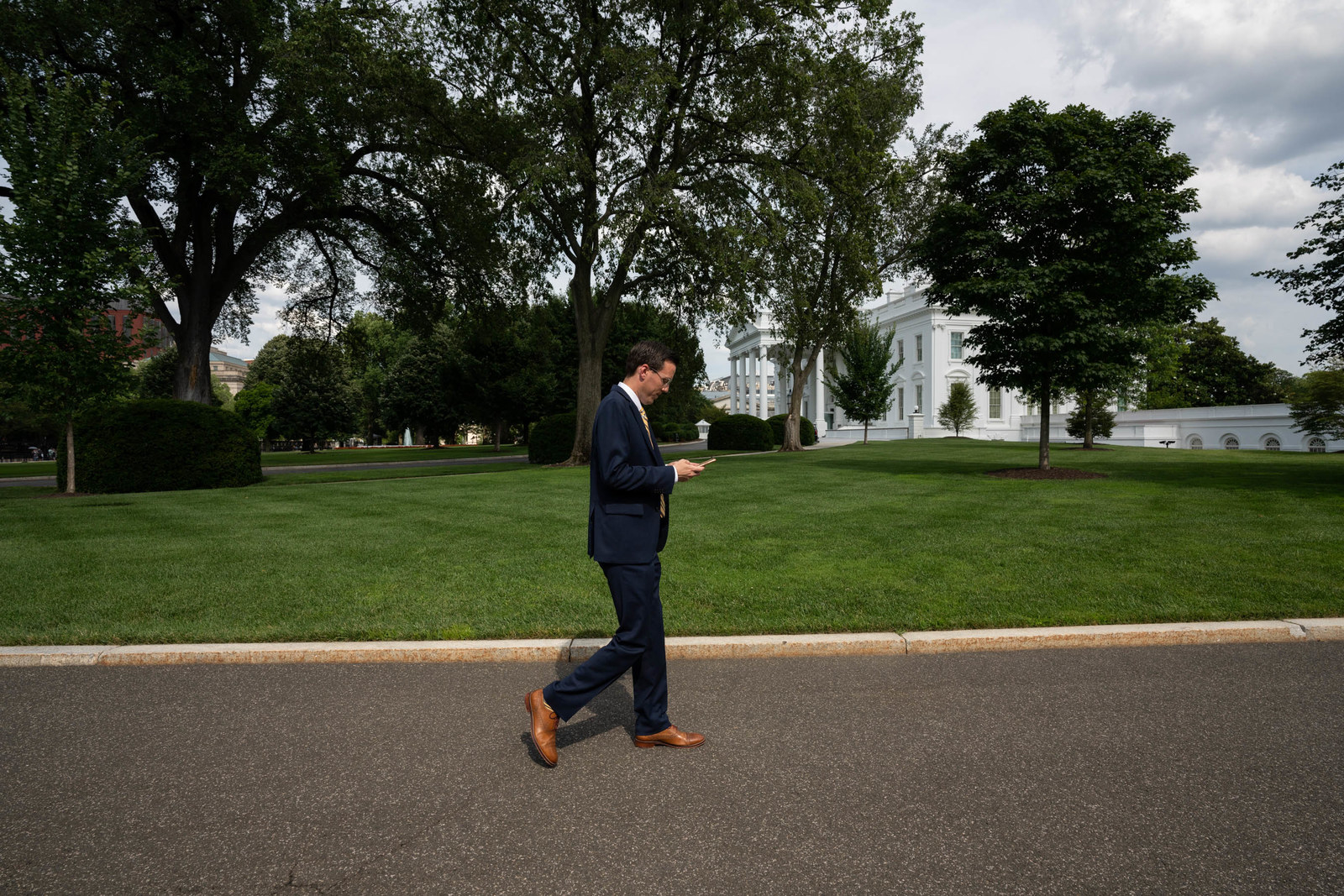