Former President Donald J. Trump lost five lawyers from his legal defense team over the weekend, just more than a week before his second impeachment trial.

“There was something lawyers wouldn’t do for money,” Stephen Colbert joked on Monday night. “That is rats fleeing a sinking rat.”

“He wanted his lawyers to make the case that he won the election and they quit, so this should be fun.” — JIMMY KIMMEL

“Yep, Trump and his lawyers disagreed on strategy. Apparently Trump got upset when they wanted to have one.” — JIMMY FALLON

“Aha, the brilliant legal strategy of pointing out to the jury how motivated you were to commit the crime.” — STEPHEN COLBERT

“At this rate, Trump’s going to be the first president to show up to his impeachment trial with a public defender.” — SETH MEYERS

“Trump suddenly found himself without any legal representation, which is still a huge improvement over being represented by Rudy Giuliani.” — JAMES CORDEN

“Trump was furious — not that they quit, that he couldn’t fire them on Twitter.” — JIMMY FALLON

“A source close to the ex-president described it as a ‘mutual decision.’ Oh, totally mutual! ‘No, Carol did not divorce me — we divorced me. We also agreed that the lawn was the perfect place for all my shirts.’” — STEPHEN COLBERT

But Trump didn’t go without for long. On Sunday, Colbert said, “the former president cruised some dark alleys of the legal world and scooped up two new lawyers,” Bruce Castor and David Schoen.

“Now these guys have a lot in common. When he was a Pennsylvania D.A. in 2005, Castor declined to prosecute Bill Cosby as part of a ‘secret agreement,’ although it is possible Castor did not know, and Cosby just dropped the secret agreement into his drink.” — STEPHEN COLBERT

“What, was the guy who defended Saddam Hussein not available?” — JIMMY FALLON

“I mean, even Rudy Giuliani thought, ‘You’re going with these guys?’” — JIMMY FALLON

“The only snowflakes we had here in L.A. this weekend were the ones blocking the vaccine line at Dodger Stadium.” — JIMMY KIMMEL

“Whatever their reason, they gathered at the entrance to Dodger Stadium for what they called a ‘scamdemic protest march.’ They blocked traffic; they delayed the vaccinations for about an hour. Now see, this is where we really miss Tommy Lasorda. He would have cleared that mess out in about a minute.” — JIMMY KIMMEL

“Whoa, these people in L.A. had to sit in their cars for an hour. How did they notice?” — TREVOR NOAH

“For Pete’s sake, it takes two hours just to change lanes on the 405.” — STEPHEN COLBERT

“The protest organizers wanted people to be open to their message, so they urged attendees to ‘refrain from wearing MAGA attire, as we want our statement to resonate with the sheeple.’ Yeah, the ones getting the vaccine are the sheeple — ‘Now everyone hide the matching hats we bought from our bankrupt casino god-king!’” — STEPHEN COLBERT

“That’s right. These doofuses with their homemade signs saying ‘Bill Gates is controlled by Satan’ are like, ‘Take off that MAGA hat or they’ll think we’re nuts.’” — JIMMY KIMMEL

“If you don’t want a vaccine, then don’t get one. I don’t agree with you, but don’t ruin it for everyone else. Like, we don’t come interrupt you when you’re busy dying of measles.” — TREVOR NOAH

“Here’s what I don’t understand — why does it always have to be the most ridiculous people who are the most fired up? Like why can’t anti-vaxxers be like those Instagram models were last summer, you know? Where they just post a black square on Instagram one day and never bring up vaccines again?” — TREVOR NOAH

The “Slave Play” playwright Jeremy O. Harris appeared on “The Daily Show,” discussing how Covid has devastated the theater industry.

Zendaya will catch up with Colbert on Tuesday’s “Late Show.” 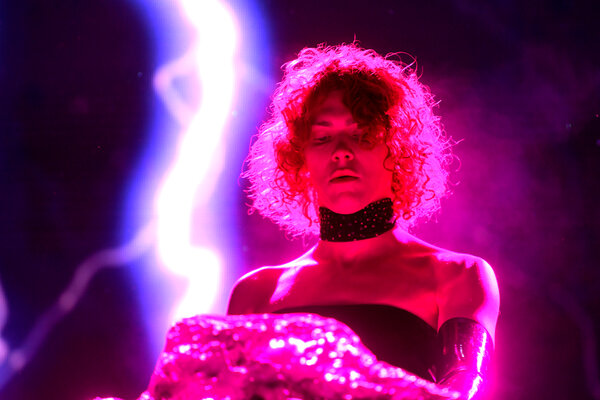 The late Sophie was a progressive performer and producer who worked with artists from Madonna to Charli XCX in her short but influential career. Here are 12 of her essential songs.