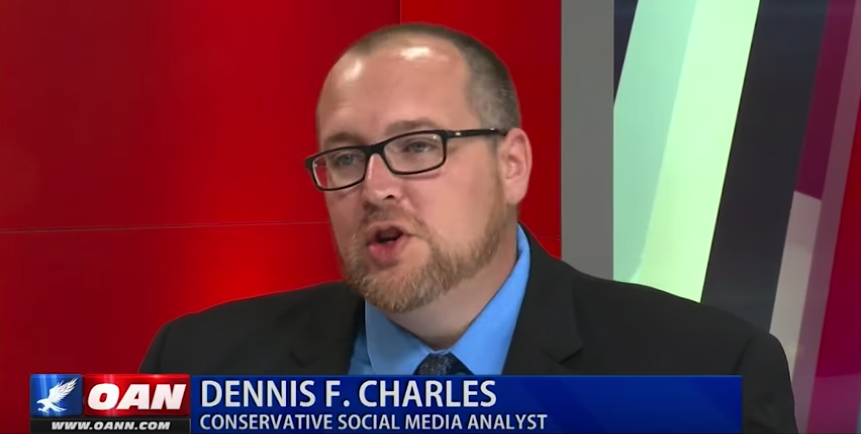 On Friday, the pro-Trump cable news channel One American News Network aired an interview with a man it identified as Dennis F. Charles, “a conservative social media analyst.” But that wasn’t his real name.

In the segment, he said social media companies were censoring conservatives, echoing a core message of the White House social media summit held the day before, on July 11. In fact, “Charles” was at the summit, attending under his better known pseudonym: Carpe Donktum.

That made it all the more notable when Donktum appeared on OANN, a channel to the right of Fox News, under what was seemingly his real name, Dennis F. Charles. Except that it was yet another diversion. BuzzFeed News confirmed this too is a fake name. The segment aired on OANN did not disclose this to viewers, contrary to standard journalistic practices.

Jack Posobiec is the OANN correspondent who interviewed Donktum for the segment. Best-known for pushing debunked conspiracy theories such as pizzagate, he previously committed plagiarism as the Washington correspondent for The Rebel, a right-wing outlet based in Toronto. He also helped plant a “Rape Melania” sign at an anti-Trump rally to discredit protestors.

And so the interview was, in a way, a signal moment for the new pro-Trump media, which has sought to challenge traditional journalism while refusing to play by its rules, or to put any particular premium on truth.

It was also an example of the White House’s reliance on passionate outsiders to shape Trump’s message and give color to his attacks. Outside of White House and campaign staff, Donktum has become one the most influential Trump supporters on social media. Trump has shared several Donktum-created memes, including one showing Joe Biden groping himself. During a recent White House meeting, the president referred to Donkum as a “genius.” He’s received coverage from Fox News, The Washington Post and New York Times, and has contributed articles to Human Events — all of which have identified him only by his pseudonym.

BuzzFeed News is not revealing Donktum’s name, at his request. In his offline life, he describes himself as a stay at home dad in Kansas and appears to have no direct connection to politics.

During the OANN segment, Donktum discussed what he perceived to be left-wing bias on Reddit, which recently quarantined the pro-Trump subreddit /r/The_Donald due to “encouragement of violence towards police officers and public officials in Oregon.” Donktum is an avid contributor to The_Donald.

Donktum told BuzzFeed News “it was just a spur of the moment decision” to use the other fake name for the interview.

“The name that I gave OANN is not my real name and … there was no deception there, it was simply a layer of security between me and my family and people that might want to harm them,” he said. (BuzzFeed News confirmed Donktum’s real name via a public Facebook profile and public records.)

Asked if he thought it was strange that OANN didn’t disclose his use of a fake name in the broadcast, Donktum said, “No not really. It was something that I didn’t give any thought to until you brought it up.”

Posobiec told BuzzFeed News he agreed to use a fake name for the segment because Donktum asked him to. Both men said they have been friends for years.

“That was just something he said we could use to identify him because he doesn’t like to go by his real name,” Posobiec said, adding “I simply respected his wishes.”

Posobiec said he didn’t inform viewers his guest was using a fake name because “I don’t have as much space as digital,” a reference to the time constraints of broadcast TV.

Posobiec said he tagged Carpe Donktum’s Twitter account in tweets about the segment and the two did a live stream about it afterwards, attempting to make the connection between the two pseudonyms clear.

OANN launched in 2013 and is funded and run by technology millionaire Robert Herring Sr. It has been steadfast in its support of Trump and actively solicits his attention and praise. A Daily Beast article about the channel’s operations described its content as “a slurry of fake news mixed with genuine reporting; internet conspiracy theories blended with far-right rhetoric and drizzled with undiluted Kremlin propaganda.”

OANN did not respond to a request for comment.