Welcome to Best of Late Night, a rundown of the previous night’s highlights that lets you sleep — and lets us get paid to watch comedy. If you’re interested in hearing from The Times regularly about great TV, sign up for our Watching newsletter and get recommendations straight to your inbox.

In a series of tweets Wednesday and Thursday, President Trump doubled down on his insistence that Alabama could have been affected by Hurricane Dorian.

“The National Weather Service has to monitor the president’s tweets as closely as they monitor actual hurricanes.” — SETH MEYERS

“Climate change. It’s once again the top issue for many people in America partly because of the devastation of Hurricane Dorian, which is such a crazy storm that it somehow hit the Bahamas, the Carolinas and then, thanks to President Trump’s Sharpie pen, also Alabama.” — TREVOR NOAH

“Clearly he drew on the map. Americans saw that and were like, ‘Don’t let him anywhere near the Constitution, please.’ [imitating Trump] ‘As you can see, our founding fathers clearly wanted free guac at Chipotle. That’s what they — I didn’t do it. Someone else did that to the Constitution.’” — JIMMY FALLON

“My favorite thing about this is that he didn’t even try to blend it in. He could have at least sent an intern to Kinko’s to print up a new chart.” — SETH MEYERS

“There is no question in my mind he now wants Alabama to be hit by a hurricane. He’s dying for this to happen. If you are in Birmingham, Huntsville, Mobile, nothing would make him happier than to see you guys wiped out tonight.” — JIMMY KIMMEL

In one tweet on Wednesday, Mr. Trump shared a map that included Alabama in the storm’s potential path while saying he would accept apologies from “the fake news.”

“Pump your breaks there, Al Roker. No one’s apologizing because that map doesn’t prove anything. First of all, it’s not from the National Oceanic and Atmospheric Administration, it’s from the South Florida Water Management District. That’s like getting your M.R.I. at Glamour Shots.” — STEPHEN COLBERT

“Plus, right at the bottom of the map it says, ‘National Hurricane Center advisories and county emergency management statements supersede this product. If anything on this graphic causes confusion, ignore the entire product.’ Strong stuff. Strong statements. Strong statement. Though, I got to say, ‘entire product’ is a very disrespectful way to describe the president of the United States.” — STEPHEN COLBERT

“The world’s most precious forest is on fire. Brazil’s leaders aren’t doing enough to stop it and its president might even want this to happen. So I’m gonna be honest, folks; it seems like there’s only one man who can stop this: Donald J. Trump. You see, what we need to do is — we need to get the president to pull out that magic Sharpie of his, and we need to get him to send that hurricane down from Alabama all the way to Brazil to fan out the flames. Come on, Mr. Trump, use your power for good! Do it now, Donald! Do it now!” — TREVOR NOAH

“The storm surge has come ashore in the country he governs. Hundreds of thousands of people without power. What’s he going to be like when he visits victims of the storm? [as Trump] ‘So sad to see the damage here in South Carolina, or as many call it, east Alabama.’” — STEPHEN COLBERT

“According to reports, Florida’s population is expected to increase by six million people by 2030 — probably from all those people moving out of Alabama to escape the hurricane.” — SETH MEYERS

“How lovely — he’s comforting imaginary victims of a disaster that never happened. [as Trump] ‘I, for one, stand with all victims of the kaiser’s assault on Narnia. The fake news never talks about all the zeppelins he didn’t send to kill poor Mr. Tumnus.’” — STEPHEN COLBERT

The British late-night talk show host Graham Norton explains how America inspired Brexit and the election of the British prime minister, Boris Johnson, while on “The Late Show.” 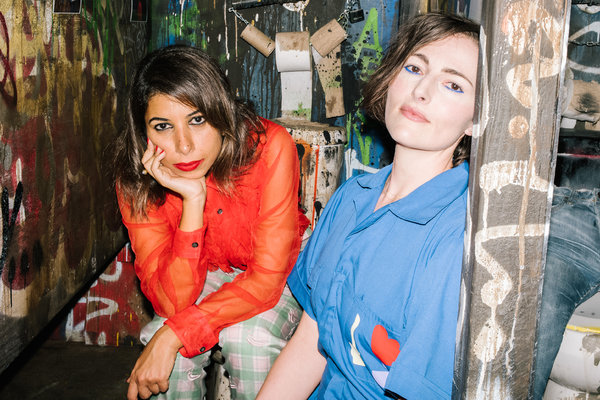 In 2017, Lizzy Goodman’s “Meet Me in the Bathroom: Rebirth and Rock and Roll in New York City 2001-2011” earned critical praise for its documentation of the era’s biggest bands. Now, Ms. Goodman has paired with the director Hala Matar for “Meet Me in the Bathroom: The Art Show,” including more than 70 works from musicians such as Karen O of the Yeah Yeah Yeahs, Paul Banks of Interpol, and Tunde Adebimpe of TV on the Radio.