‘Touching the Void’ Review: Choices That Shape a Life on the Edge

Many movies, books or shows are metaphorical slogs. The play “Touching the Void” is about a literal one: the slow, agonizing crawl of the British mountaineer Joe Simpson as he tried to return to his base camp after sustaining a gruesome injury on an Andes peak.

The Bristol Old Vic production, which is streaming live, then on demand, from Britain (and is presented by N.Y.U. Skirball as part of a “digital tour”), starts off with Joe’s wake in a Scottish inn. Since the show is based on the best-selling book Simpson published in 1988, three years after his ordeal, it’s not much of a spoiler to reveal that he somehow survived.

The playwright David Greig came up with this narrative device mostly to introduce the character of Joe’s sister, Sarah (Fiona Hampton), who acts as the audience’s proxy. This means that Sarah needs to be told, over and over, what could possibly drive some people to risk their lives to reach mountaintops. She is angry as all out and hates climbers, those adrenaline junkies with their “endless [expletive] stories about how they nearly died,” she tells Joe’s climbing companion, Simon Yates (Angus Yellowlees, with fetching two-tone hair). “Blah blah epic blah.” 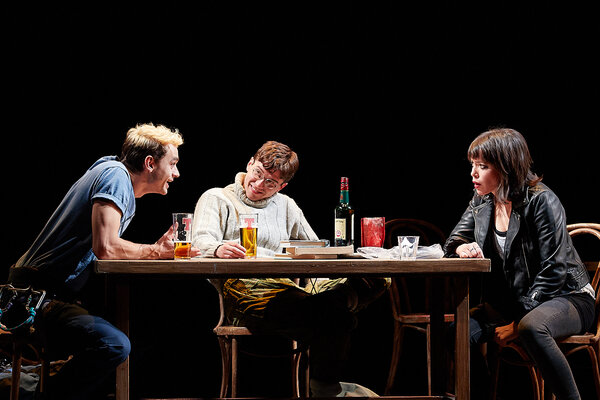 Much of the first act explores the friendship between Joe (Josh Williams) and Simon, and their ambition to make a mark by pioneering an unclimbed route, on the 20,000-foot Siula Grande in Peru. They work on the logistics of the ascent and, much more complicated, the descent.

As staged by Tom Morris (the co-director of “War Horse”), the production, which premiered in 2018, remarkably evokes the physicality of scampering across rugged terrain or hanging by a thread off a snowy, freezing, windy face with just some low platforms and an apparatus halfway between a latticed scaffold and monkey bars. (This is the kind of show where the set designer Ti Green and the sound designer Jon Nicholls should be above the title on the marquee.)

But as is often the case with human exploits, the most dramatically compelling parts of the story, and the play, are not so much the historical background, the practicalities of the expedition or even Simpson’s survival feat. Instead it’s the spiral of decisions, some technical and some ethical, that surround the events — just like how Jon Krakauer’s classic account of an Everest disaster, “Into Thin Air,” is made so engrossing by the human errors and the hubris. “There is always a choice,” Joe and Simon say.

Coming down the peak, Joe falls down an ice cliff and breaks his leg (the snapping sound is especially horrifying). Simon is confronted with a terrible dilemma: stay and possibly die as well, or leave and try to at least save one life, his own.

Simon leaves, thinking there is no way his friend could survive — only he does.

Sarah’s heated interactions with her brother, Simon and, to a lesser degree, the comic-relief figure of the backpacker Richard (Patrick McNamee) dominate Act I, which has a genuine urgency as it deals with those pesky human issues.

But after intermission, the show focuses on Joe’s journey back to safety and bogs down as he spends minutes at a time pulling himself along and yelling in excruciating pain — admittedly, streaming undercuts much of the impact those scenes likely would have in a theater, just like “War Horse” was much more effective live. The overuse of 1980s songs becomes distracting (Simpson’s real-life favorite, “This Is the Day,” plays during a scene in a crevasse and — just, no), and it eventually it starts feeling as if Greig can’t figure out how to end the show. Fortunately, real life gave him a good way out.

Touching the Void
Through May 29; on demand June 2-8; bristololdvic.org.uk