"There Are No Activities, Only Crying": Kids Describe What It's Like Inside A Border Detention Center 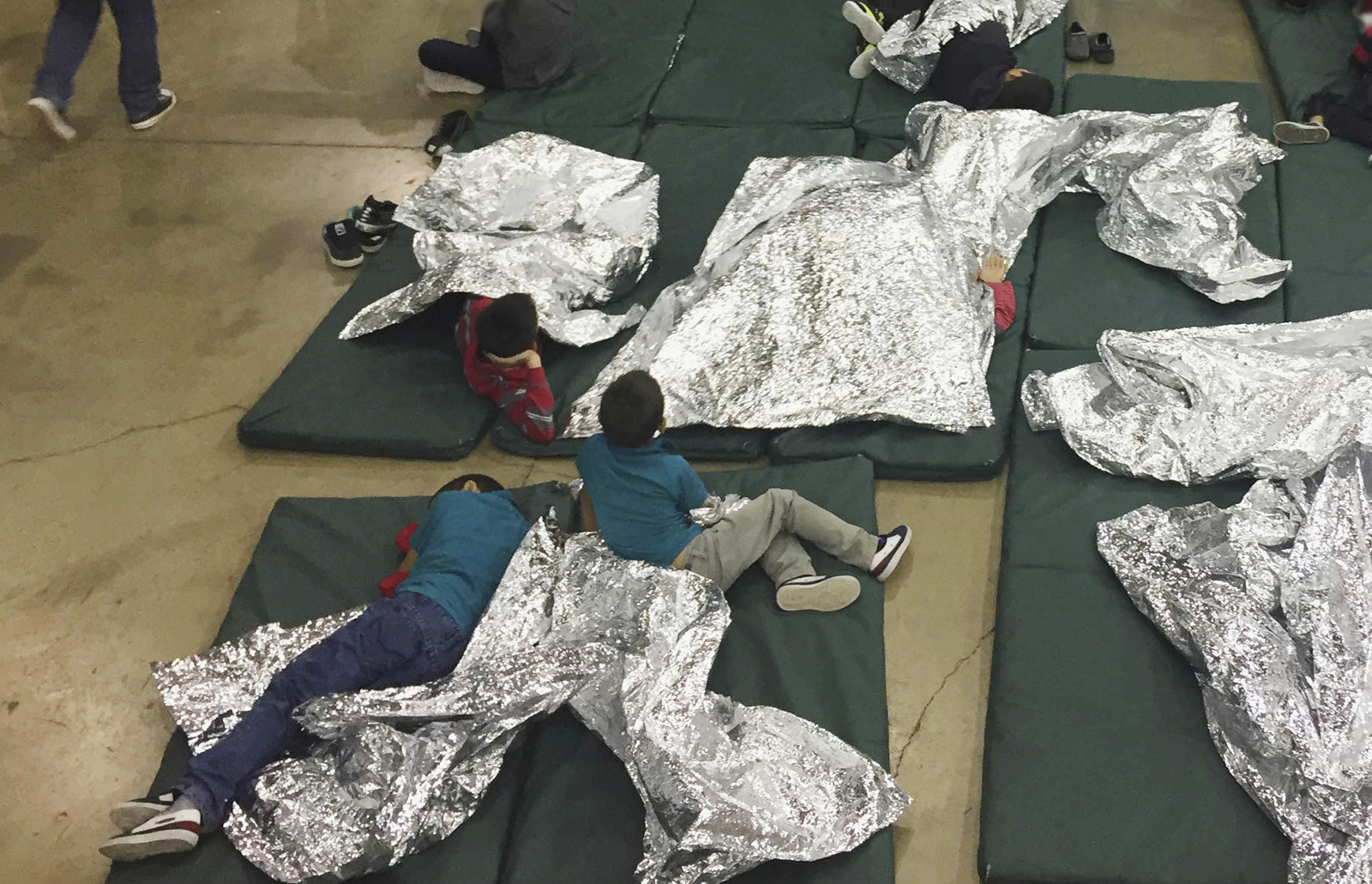 A June 17, 2018 photo shows children in cages at a facility in McAllen, Texas.

Immigrant children and teens held in US detention centers along the southern border described being cold and hungry while crowded into cages with little or no access to showers, clean clothes, or even a place to sleep.

Some recounted how they had been separated from parents or grandparents. Teen mothers said they struggled to keep their babies clean and warm. Some young children had no one to care for them except for other child detainees.

Attorneys collected the statements last week while visiting Customs and Border Protection facilities holding children, as part of a 1997 court settlement agreement that specifies how long and under what conditions immigrant kids can be held in. Descriptions of what the lawyers heard from these children and saw led to a massive public outcry over conditions inside a Border Patrol facility in Clint, Texas.

The lawyers are asking a judge to immediately require inspections of Border Patrol facilities in El Paso, Texas, and the Rio Grande Valley as part of an effort to improve the conditions that immigrant children face.

Here’s how the children described the conditions inside.

A 12-year-old boy said he was always hungry, especially at night.

“I’m hungry here at Clint [detention center] all the time. I’m so hungry that I have woken up in the middle of the night with hunger. Sometimes I wake up from hunger at 4 a.m., sometimes at other hours. I’m too scared to ask the officials here for any more food, even though there is not enough food here for me.”

A 16-year-old girl said 20 teens were crowded into a cage with babies and children, and only one mat to sleep on.

“We are in a metal cage with 20 other teenagers with babies and young children. We have one mat we need to share with each other. It is very cold. We each got a mylar blanket, but it is not enough to warm up. There are benches but we cannot sleep there. Sometimes it is so crowded we cannot find a place to sleep, so they allow a few of us to sleep outside the fenced area. The lights are [on] all of the time.” 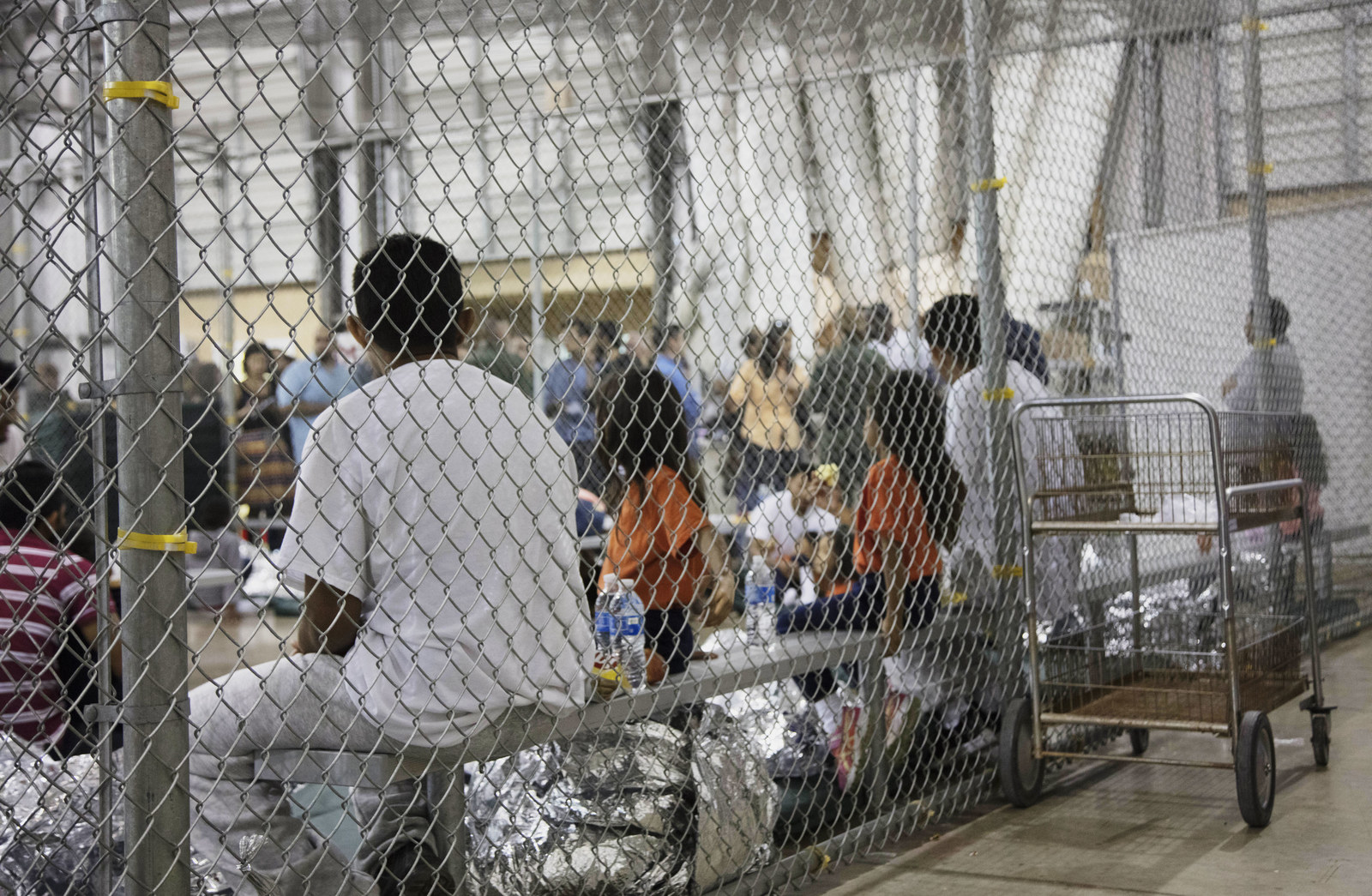 A June 17, 2018 photo provided by US Customs and Border Protection shows a facility in McAllen, Texas.

An 11-year-old boy said he was with toddlers who had no one to care for them.

A 16-year-old girl said she and her baby were so cold and wet that they got sick.

“We slept on mats on the floor and [they] gave us aluminum blankets. They took our baby’s diapers, baby formula, and all of our belongings. Our clothes were still wet
and we were very cold, so we got sick… I’ve been in the US for six days and I have never been offered a shower or been able to brush my teeth. There is no soap and our clothes are dirty. They have never been washed.” 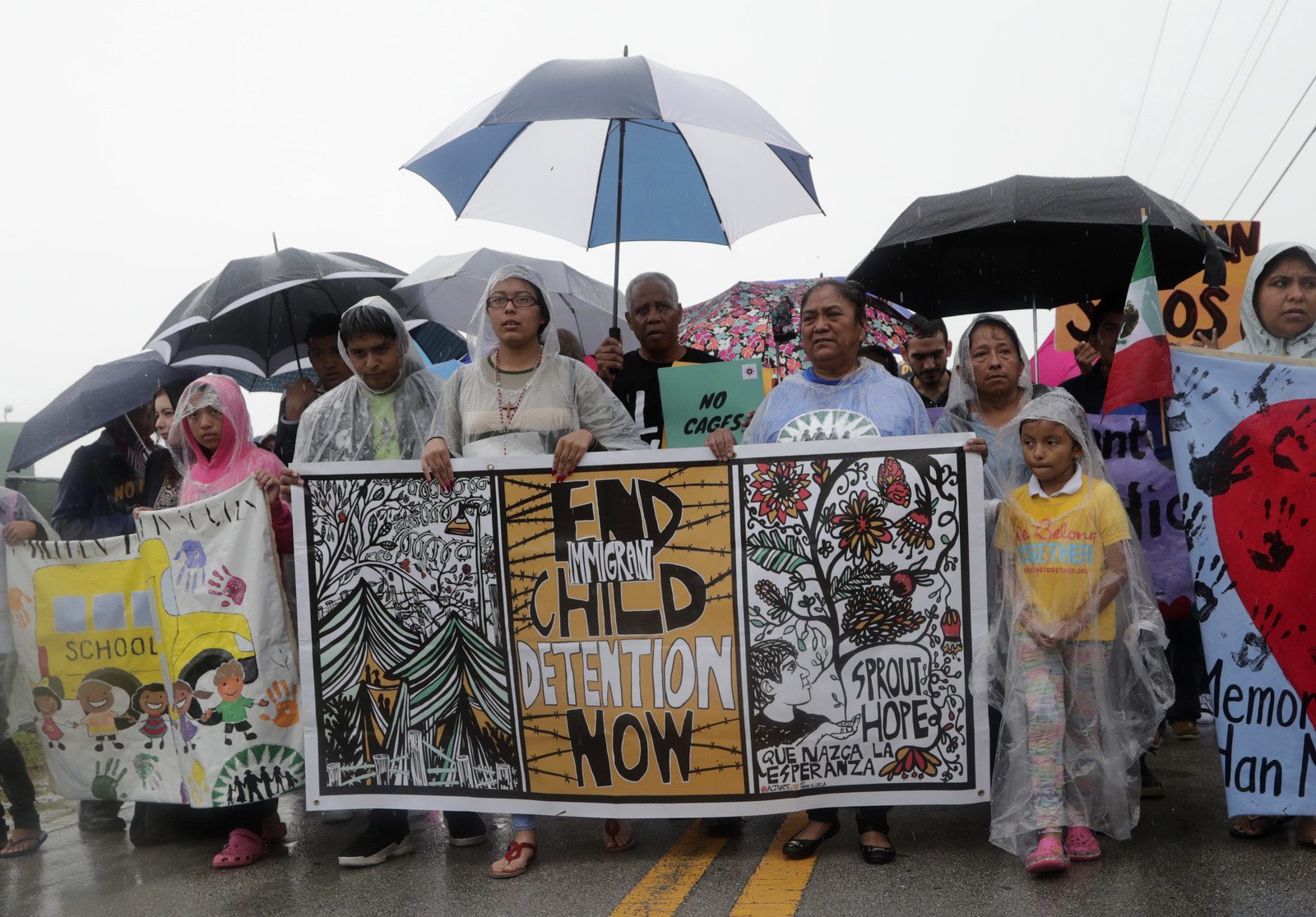 Protestors march outside of the Homestead Temporary Shelter for Unaccompanied Children in Florida.

An 8-year-old boy described sleeping on a cement bench.

“They took us away from our grandmother and now we are all alone. They have not given us to our mother. We have been here for a long time. I have to take care of my little sister. She is very sad because she misses our mother and grandmother very much… We sleep on a cement bench. There are two mats in the room, but the big kids sleep on the mats so we have to sleep on the cement bench.”

A 17-year-old girl said there were no clean clothes for her baby.

“Three days ago my baby soiled his clothes. I had no place to wash the clothes so I could not put them back on my baby because when he went to the bathroom his poop came out of his diaper and all over his clothing. Since then, my baby of only three months has only been wearing a small little jacket made of t-shirt material. I have nothing else for my son to wear…. I have been told they do not have any clothes here at this place. I just want my baby to be warm enough. I am having to make sure I carry my baby super close to me to keep his little body warm.” 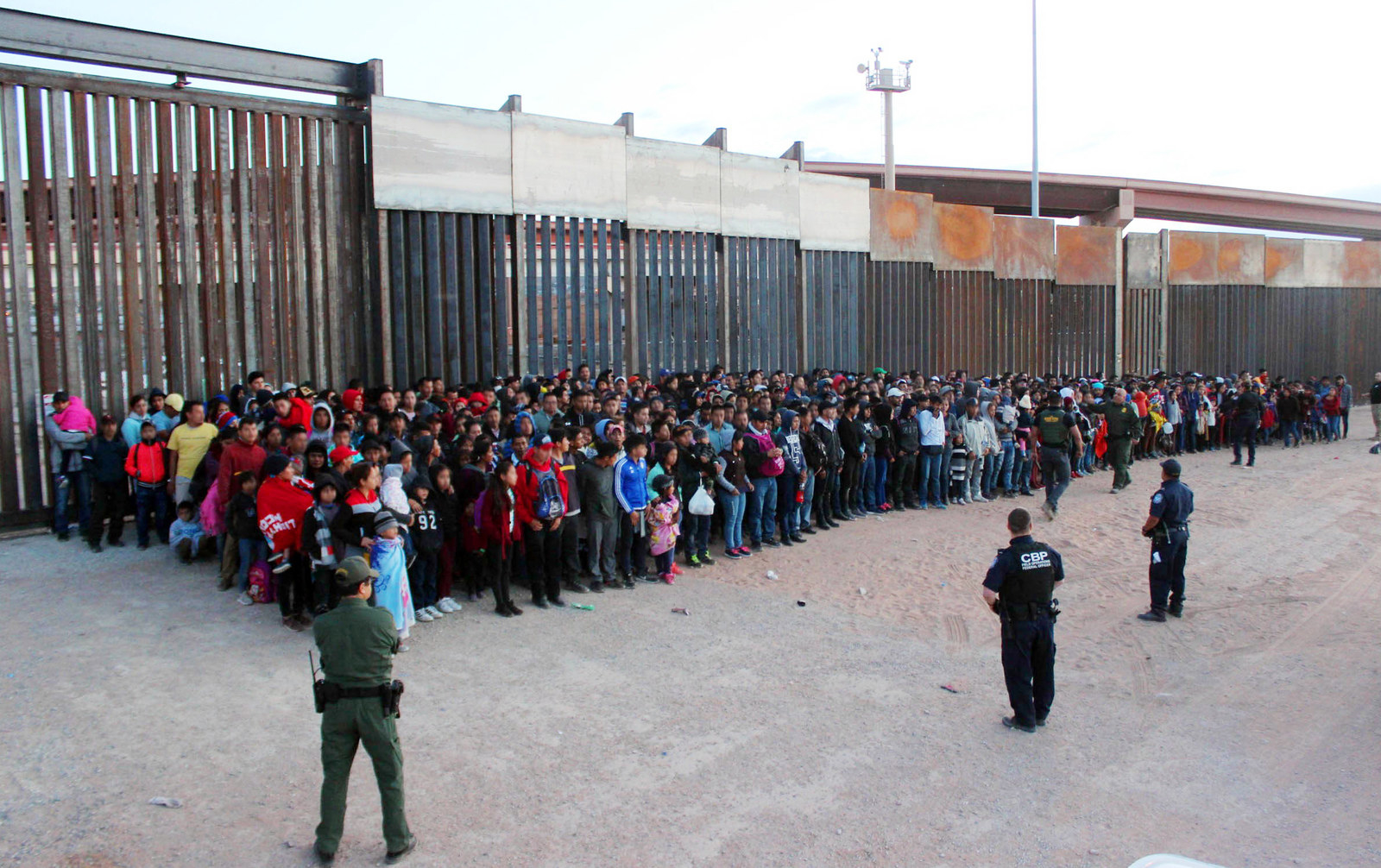 A May 29, 2019 file photo released by US Customs and Border Protection shows some of 1,036 migrants who crossed the US-Mexico border in El Paso.

A 15-year-old girl said children had nothing to do except cry.

“I started taking care of [a 5-year-old girl] in the Ice Box after they separated her from her father. I did not know either of them before that. She was very upset. The workers did nothing to try to comfort her. I tried to comfort her and she has been with me ever since. [She] sleeps on a mat with me on the concrete floor. We spend all day every day in that room. There are no activities, only crying.”

A pregnant 17-year-old girl said she and her baby were forced to sleep on the floor. 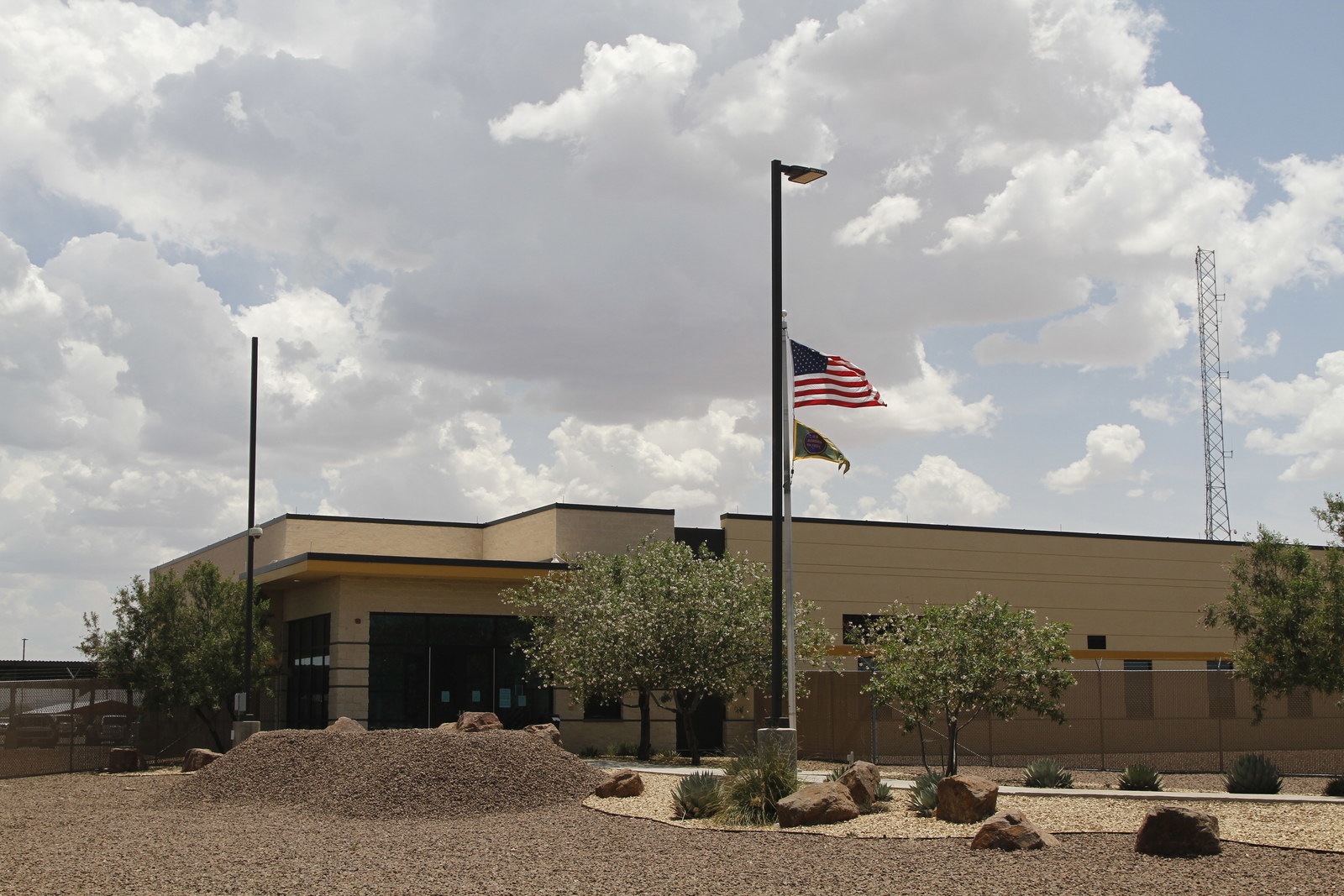 The entrance to the Border Patrol station in Clint, Texas.

A 17-year-old boy said he had no soap, toothbrush, or toothpaste.

“At Ursula [detention center], we have not been able to shower. The
toilet is out in the open in the cage, there is no door for any privacy. There
is water but no soap to wash our hands. There are no paper towels to dry our
hands. We have not been given a toothbrush or toothpaste to brush our
teeth.”

A 5-year-old boy said he was sick after being taken from his father.

“I was apprehended with my father. The immigration agents separated me from my
father right away. I was very frightened and scared. I cried. I have not seen
my father again… I have had a cold and cough for several days. I have not seen
a doctor and I have not been given any medicine.”