As the pandemic has forced theater companies to reinvent themselves as digital creators, colleges and even high schools have delivered some of the most innovative projects. The latest example is Baldwin Wallace University’s exciting take on Steven Sater and Duncan Sheik’s Broadway hit “Spring Awakening,” which the university, in Ohio, is bringing back for an encore after a November run.

Victoria Bussert’s production alternates between Zoom and outdoors scenes (looking mightily impressive despite being filmed mostly on an iPhone). The actors often wear masks, which actually works well in a show about sexual repression, and the finale is especially effective. Dec. 17-20; bw.edu/events.

From Arts at the Old Fire Station, based in England, comes a revival of the British playwright Mike Bartlett’s fast-paced 2014 play, “An Intervention,” in which two friends, A and B, discuss their lives and political engagement. The production stars Charly Clive and Ellen Robertson, of the comedy duo Britney (named after Clive’s now removed brain tumor). This version is said to have been “updated and reworked,” and we’ll hazard that Bartlett (“King Charles III,” “Love, Love, Love”) might have been inspired by the past year’s headlines. Through Jan. 12; oldfirestation.org.uk. 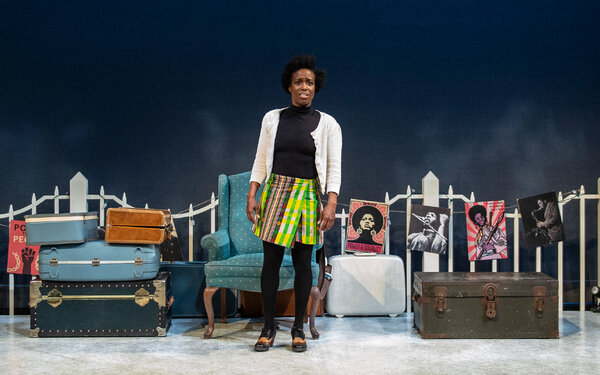 Baltimore’s Everyman Theater presents the premiere of Caleen Sinnette Jennings’s semi-autobiographical “Queens Girl: Black in the Green Mountains,” in which the protagonist, Jackie, attends college in Vermont at the onset of the 1970s. The show concludes Jennings’s trilogy that follows Jackie at different times in her life — “Queens Girl in the World” and “Queens Girl in Africa” are also available on-demand. Through Feb. 4; everymantheatre.org.

Debra Ann Byrd, the artistic director of the Harlem Shakespeare Festival, also opts for the solo route to tell her story in “Becoming Othello: A Black Girl’s Journey,” presented with the National Arts Club. The director, Tina Packer, is another woman with keen insights on the bard: She founded Shakespeare & Company in Lenox, Mass. Dec. 16-22; facebook.com/HarlemShakespeareFestival.

In “Between the Two Humps,” Halley Feiffer (“Moscow Moscow Moscow Moscow Moscow Moscow”) applies her comic touch to a fairly famous story — let’s just say the characters include a Joseph (Noah Robbins) and a Mary (Kara Young). Of particular interest is Gabriel, played by the performer Peppermint, who made quite a splash in the Go-Go’s musical “Head Over Heels.” This new play is part of MCC Theater’s LiveLabs series. Starts Dec. 17; mcctheater.org.

“Burning Bluebeard,” from the Chicago company the Ruffians, is about the fire that killed more than 600 people at a holiday show in 1903. Thanks to streaming, more people can now discover a production that has proved an enduring hit in Chicago since its 2011 premiere. The streaming version is a live capture of last year’s edition. Through Jan. 3; porchlightmusictheatre.org.

After well-received productions of classics by its namesake, Molière in the Park presents its first contemporary American play with Christina Anderson’s “pen/man/ship,” about what happens when a Black surveyor boards a ship traveling to Liberia in 1896. The company’s virtual productions make imaginative use of video filters and effects, and this new one, directed as usual by Lucie Tiberghien, does not disappoint. The impressive cast includes Crystal Lucas-Perry and Kevin Mambo. Through Jan. 4; moliereinthepark.org.

The Congress for Jewish Culture presents a reading of S. Ansky’s supernatural play “The Dybbuk” for the 100th anniversary of its world premiere. The show was a sensation in the first decades of the 20th century, and is a staple of Yiddish theater. The actors dialed in live from all over the world to perform, under Allen Lewis Rickman’s direction. Available now; congressforjewishculture.org.

For its gala this year, New York City Center presented Audra McDonald in a pared-down showcase held in the empty venue. Backed by the pianist and music director Andy Einhorn, the singer highlighted biggies of musical theater, with some nifty curios thrown in — watch for Kurt Weill and Maxwell Anderson’s melancholy “It Never Was You,” for example, or Frank Loesser’s devilish tongue-twister “Can’t Stop Talking.” Through Jan. 3; nycitycenter.org.

Going virtual hasn’t stopped mentalists; if anything, they thrive online. Jason Suran pulls off some whoppers in “Reconnected” — and here is a good place to belatedly apologize to my fellow Zoom audience members for yelling an awe-struck “Noooo!” after Suran correctly guessed a verb I’d chosen. jasonsuran.com.

As for Eric Walton (“Esoterica”), he will livestream his new show, “Virtual Impossibilities,” from the Wild Project, in Manhattan’s East Village. Dec. 16-20; thewildproject.org.

Like many of us, Tom DeTrinis is angry. Unlike most of us, he has channeled his rage into a comic solo show — “Making Friends,” which was filmed at the Pico Playhouse, in Los Angeles, for the IAMA Theater Company. DeTrinis has appeared in several of Justin Sayre’s camp-tastic plays, and he directed Drew Droege’s popular solo “Happy Birthday Doug” (Droege returned the favor here). Add the participation of “Crazy Ex-Girlfriend” choreographer Kathryn Burns, and this could make for good catharsis. Dec. 17-Jan. 11; iamatheatre.com.

‘Songs for a New World’

Aside from a body mic here, a computerized lighting board there, the essence of theater has changed little in hundreds of years. Yet here we are, questioning whether live performance and physical togetherness are essential to the art form. The cast members of the San Francisco Playhouse’s staging of Jason Robert Brown’s “Songs for a New World,” for example, lip-synced numbers they had prerecorded. We are watching them do so from our own home. It’s a safe bet that back in February, few would have called this experience theater. Through Dec. 31; sfplayhouse.org.