One of the benefits of streaming theater — come on, we must think of that glass as half-full — is that we can now mix and match offerings within a single evening. You can start with a short from London and pair it with a concert from Chicago. Or you can have a full meal of show tunes by sticking around the Pasadena Playhouse’s website.

At 22 minutes, the very funny “Iceboy!” — a teaser for a forthcoming musical — is a tasty appetizer. Megan Mullally, Nick Offerman, Adam Devine and Laura Bell Bundy make the most of the abbreviated running time.

Then it’s on to the main course: the Playhouse’s new tribute to Jerry Herman, the composer of “Hello, Dolly!,” “La Cage Aux Folles” and “Mame.” The show was conceived by Andy Einhorn, the musical director for the “Dolly” revival with Bette Midler, so he knows how to capture that Herman zest. Look for the reliably entertaining Lesli Margherita in the cast. Through Feb. 7; playhouselive.org. 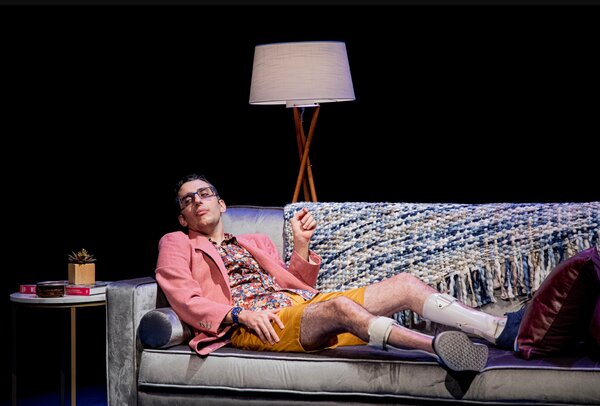 In this solo show presented by Woolly Mammoth in association with IAMA Theater Company, the wonderful playwright-performer Ryan J. Haddad (whom you may know from the Netflix series “The Politician”) considers his dating options as a gay man with cerebral palsy. Snubbed by a potential date he was corresponding with, Haddad snaps, “That would have absolutely devastated me, if only he could spell.” Feb. 1-28; woollymammoth.net.

Every year, Origin 1st Irish Theater Festival presents new works by Irish companies in Ireland, Northern Ireland and New York. It’s going fully virtual this month, with a mix of plays, features, documentaries and panels. Look for the Fishamble company’s production of Eva O’Connor’s “Mustard,” as well as “Under the Albert Clock,” an omnibus of five short plays by women that are all set in 2050. Through Jan. 31; origintheatre.org.

In 1987, Alan Bowne’s drama about an unidentified virus ravaging New York referred to AIDS; it feels pertinent again today, for different reasons. MCC and Tectonic Theater are making available again a reading from April, in which Marisa Tomei returns to her role in the original production. This time around, Tomei is paired with Oscar Isaac and Patrick Breen. Jan. 28-31 (longer for MCC subscribers); mcctheater.org.

Turns out that the playwright Rajiv Joseph can draw, too. The author of “Bengal Tiger at the Baghdad Zoo” has written, directed and illustrated “Red Folder,” a short narrated by Carrie Coon and commissioned for the virtual stage by the Steppenwolf company, in Chicago. Jan. 27-Aug. 31; steppenwolf.org.

Further south, the powerhouse Alley Theater, in Houston, presents the artistic director Rob Melrose’s new translations of short works by classic playwrights, starting with August Strindberg’s “The Stronger” (through Feb. 7) and “A Half Sheet of Paper” (Jan. 22-Feb. 14). alleytheatre.org.

In Carmen Rivera’s “La Gringa,” a New Yorker named María Elena García thought she’d be welcome with open arms during her first visit to Puerto Rico, land of her ancestors. She discovers quickly that it’s not always easy to straddle two cultures. The play became an instant sensation when it premiered at Repertorio Español in 1996, and it remains the longest-running Off Broadway play in Spanish. While you’re at it, check out the company’s production of the Federico García Lorca masterpiece “La Casa de Bernarda Alba.” repertorio.nyc.

The Broadway Cares benefits have reliably been among the most entertaining streaming projects of the past year, and this month alone brings a couple of alluring ones. First, Marisa Tomei turns up again, this time with Bobby Cannavale, in a reading of the Jon Robin Baitz play “Three Hotels,” made up of three monologues and directed by Moisés Kaufman. Jan. 26-30; broadwaycares.org.

A lot more expansive is “Anjou: The Musical Horror Tale,” a modern Mexican opera by Guillermo Mendez M. and Guadalupe Sandoval about the war between Roman Catholics and Protestants in 16th-century France. We’re only getting highlights, but this virtual event is not scrimping, with a cast of 17 that includes Eden Espinosa, Bianca Marroquín, Julia Murney, Shereen Pimentel and Javier Muñoz. Jan. 29-Feb. 2; broadwaycares.org.

When Branden Jacobs-Jenkins’s brilliant play “Gloria” opened at the Vineyard Theater, in 2015, it shook audiences with a plot twist that was as brutal as it was surprising. It’s a good bet the event will shock virtual audiences too, when the ace original cast — Kyle Beltran, Catherine Combs, Michael Crane, Jennifer Kim, Jeanine Serralles and Ryan Spahn — reunites for a benefit reading. Through Jan. 24; vineyardtheatre.org.

The Mint Theater had the foresight to record many of its productions before the pandemic, and it continues to upload goodies from its vault of unheralded plays — the company’s niche specialty. The emphasis on female playwrights is particularly welcome, with two dramas from 1936 going online next. Lillian Hellman’s “Days to Come”— about a factory-owning family’s attempt to snuff out a strike — is available through Feb. 21. Next month will feature “Katie Roche” by Teresa Deevy, an Irish playwright who has been one of the Mint’s biggest (re)discoveries. Feb. 1-Mar. 28; minttheater.org.