Theater to Stream: A Dispatch From Britain and a Greek Classic

Theater is slowly returning to what it knows best: actors and audiences in the same room at the same time.

Yet digital initiatives endure. Companies in Britain appear to be ahead of their American colleagues when it comes to putting on physical shows while also catering to audiences who, for one reason or another, don’t have access to them in person. As the Southwark Playhouse in London says on its website, “This is the beauty of online stuff *waves furiously to all our international pals.* You can view this show from anywhere in the world.” That company will livestream two performances (on the same day) of its production of the Charles Dyer “Staircase,” a 1966 drama about a couple of gay men at a time when their relationship was vilified. July 3; southwarkplayhouse.co.uk

Terrence McNally’s 1980s farce is set at the opening-night party (remember those?) of a Broadway show (they’re coming back, you know). To work at all, the play needs a cast of ace comedians who can milk the assembled egos and their petty feuds. Luckily, the George Street Playhouse in New Jersey has wrangled crackerjacks, including Andy Grotelueschen (a Tony Award nominee for “Tootsie”), Julie Halston, Christine Toy Johnson and Triney Sandoval. Through July 4; georgestreetplayhouse.org 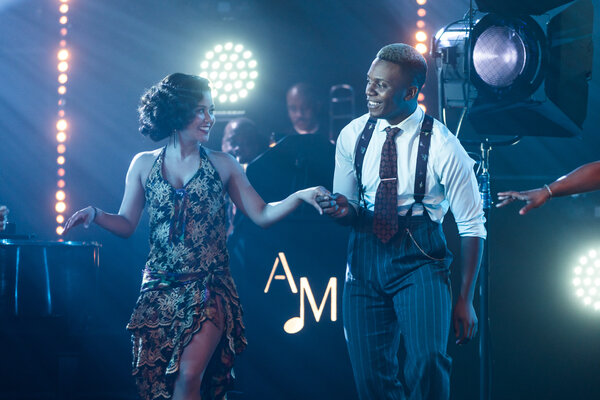 The Signature Theater in Arlington, Va., is presenting an energetic full production of the revue “After Midnight,” which ran on Broadway in 2013. Christopher Jackson (“Hamilton”) leads the cast through a whirlwind of jazzy Cotton Club-era songs, held together by Langston Hughes texts. The show has many pleasures, like the heavenly vocal harmonies in “Between the Devil and the Deep Blue Sea” and a timely reminder that tap is exhilarating. Through Aug. 4; sigtheatre.org

‘The Bitch Is Back: An All-Too Intimate Evening’

Sandra Tsing Loh’s 2015 solo show tackled the subject of menopause. Anybody familiar with Loh’s bitingly funny essays will know that for her, tackling means wrestling to the ground. After all, her memoir on the subject was titled “The Madwoman in the Volvo: My Year of Raging Hormones.” In Los Angeles, the Broad Stage is bringing the show back for a digital encore, because Lord knows a lot of women out there need that outlet. Through June 30; thebroadstage.org

Created by Felix Barrett of the British company Punchdrunk (whose “Sleep No More” opened in New York just over 10 years ago) and Dennis Kelly (“Utopia”), “The Third Man” is a cryptic hybrid of serial television and theater starring Jude Law. “Summer” and “Winter” are available on HBO; the middle part, “Autumn,” was done last fall as a live theatrical broadcast, and is now streaming for free. In typical fashion for the envelope-pushing Punchdrunk, “Autumn” goes on for 12 hours. punchdrunk.com

Theater for a New Audience presents Ellen McLaughlin’s adaptation of this ancient Greek trilogy, which she has streamlined into a single piece. Of course this only means a more concentrated dose of murder, palace intrigue and revenge (Friday through June 29; tfana.org). Keeping busy, McLaughlin has another classic coming up this summer: the Jacobean play “Pericles, Prince of Tyre,” presented into consecutive streamable “episodes” for the San Francisco Shakespeare Festival (starting July 2; sfshakes.org).

It’s a safe bet that when the Westport Country Playhouse in Connecticut opened in 1931, its founders did not expect the 90th-anniversary season would be taking place in a virtual universe even H.G. Wells couldn’t imagine. But here we are, and Michael Gotch’s new play, about folks discussing retrofitting their lives and best environmental practices at a Fourth of July picnic, uses green screens for the sets. June 29-July 18; westportplayhouse.org

Steppenwolf, in Chicago, concludes its virtual season with Donnetta Lavinia Grays’s fable of community and forgiveness, directed by Tamilla Woodard. When the solo show premiered at the WP Theater in New York early last year, it ended with the audience voting on a tough decision. That element is maintained in this digital capture, perhaps without the emotional impact of everybody being in the same room at the same time, but preserving the play’s anguished questioning. Through Aug. 31; steppenwolf.org

Abruptly ending communication with someone with no explanation is called ghosting, but this play, by Anne O’Riordan and Jamie Beamish (Nigel Berbrooke in “Bridgerton”) may just refer to the old-fashioned supernatural phenomenon. Or does it? The Irish Repertory Theater is now streaming the Theater Royal, Waterford, production, directed by Beamish and starring O’Riordan. Through July 4; irishrep.org

Russian theater productions are among the most creative in the world, but even at the best of times it’s been difficult to see them in the United States. This company is making it a lot easier by offering live captures and documentaries like “Rezo,” about the brilliant Georgian puppeteer Rezo Gabriadze, via various streaming options. One of them is Kanopy, which is free through many public libraries (though not, alas, New York’s). On-demand platforms include Stage Russia’s Vimeo channel and Digital Theater. stagerussia.com