The Week in Arts: CHAI; Merce Cunningham and Reconstructed Chekhov 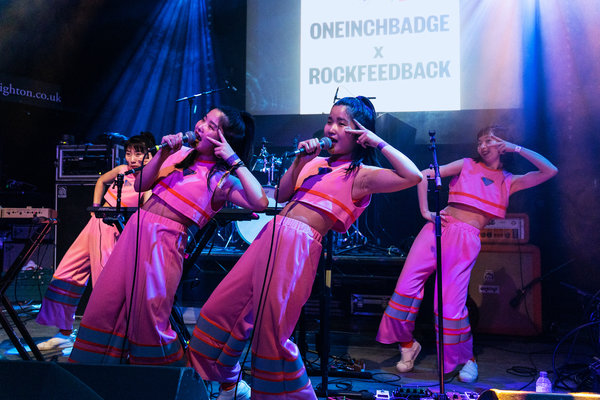 In Japanese, the term “kawaii” refers to the cutesy aesthetic of pop culture phenomena like Hello Kitty and the virtual pop star Hatsune Miku. The members of CHAI, the four-piece girl group from Nagoya, are devotees of what they call “neo-kawaii.” The thematic through-line of their music, “new-cute” is about expanding definitions of cuteness and bucking insecurity in favor of self-love. “I’m Me,” a highlight from the band’s recent album, “Punk,” features lyrics that translate to “I don’t know about the world but I know me/I don’t hide my weight”; on other songs, the performers sing about body hair and their love of dumplings.

CHAI’s overtly feminist message is delivered in an ecstatic pop-punk burst of crunchy guitars, synthetic gurgles and gleeful crew vocals. Live, the group’s energy is even more infectious than on their recordings. OLIVIA HORN

While Merce Cunningham: SummerCool may sound like a new fragrance — that actually wouldn’t be so cool — it is an evening dedicated to the groundbreaking choreographer in his centennial year. The showcase, hosted by SummerStage with guest curation by Catherine Tharin of the 92nd Street Y, includes two incomparable dancers: Melissa Toogood, a former Cunningham company member, and Calvin Royal III, a soloist at American Ballet Theater. Each instills Cunningham’s austere movement with a mysterious, inherent drama. And there’s more: Stephen Petronio Company reprises “Tread” (1970), a delightful work performed behind a row of tall industrial fans, and the A-Y/dancers, a repertory group from the Hudson Valley, offers “A to Y MinEvent.” All told, it’s a rare occasion. While the Cunningham company first performed the choreographer’s dance version of John Cage’s “4’33”” at Central Park in 1994, there is no record of any other appearances there. Cunningham, who died in 2009, loved nature; it’s only fitting that his dances be surrounded by it. GIA KOURLAS

Theater: In ‘Moscow,’ Chekhov Gets a Halley Feiffer Remix

No one makes dark comedy with the savagery of Halley Feiffer, who writes like a mixologist inventing the perfect cocktail of absinthe, effervescence and artisanally broken glass. Yes, there will be blood if you drink it down, but isn’t it delicious? And aren’t you laughing anyway?

In her abundantly titled new play “Moscow Moscow Moscow Moscow Moscow Moscow,” Ms. Feiffer (“The Pain of My Belligerence”) reworks Chekhov’s “Three Sisters,” making sharp and sportive mockery of the original text, even as she hews closely to it. The setting is still the Russian countryside, circa 1900, but the dialogue of its ennui-stricken characters feels aggressively current.

As Olga, Masha and Irina long miserably for Moscow, the play examines questions of agency and happiness with a depth of feeling that comes as a surprise. Directed by Ms. Feiffer’s frequent collaborator Trip Cullman, it’s in previews for an opening on Thursday, July 18, at the Robert W. Wilson MCC Theater Space in Hell’s Kitchen. LAURA COLLINS-HUGHES

Art: A Triple Play in the Country

Make time this summer to visit the bucolic upstate campus of Bard College, where the CCS Bard Hessel Museum is hosting three alluring exhibitions. “Leidy Churchman: Crocodile,” a first museum solo for the young American painter, follows a consistently engaging practice that looks for the overlap between high-concept premise and homespun craft. “Nil Yalter: Exile Is a Hard Job,” a retrospective for the pioneering, Paris-based feminist, includes a huge projection of her famous 1974 video “Headless Woman,” in which she paints erotic passages in concentric circles around her navel, and “Acting Out: Works from the Marieluise Hessel Collection” is a sprawling survey of art’s potential to pinch-hit for anthropology. WILL HEINRICH

Murder is still bloody hell in “London Kills,” the Acorn TV original series returning on July 15 with a five-part second season. Starring Hugo Speer as the inscrutable D.I. David Bradford, and Sharon Small, Bailey Patrick and Tori Allen-Martin as his diligent crime squad, the detectives unearth body after body — a student buried in a garden, an au pair slain in a compromising position, a bludgeoned pub owner, an executed father and son — while trying to solve their biggest case: What happened to Bradford’s missing wife? And pondering whether their boss is perhaps the dirtiest thug of all.

London not your kind of town? Choose Copenhagen instead with “Straight Forward,” a Scandi-Kiwi-noir already streaming on Acorn. Cecilie Stenspil digs into a bag of tricks to play a Danish con and master of disguise who plots revenge against her father’s killer — before high-tailing it to New Zealand to save the rest of her family, and enjoy a bit of sightseeing. KATHRYN SHATTUCK

Film: Learning to Fight in ‘The Art of Self-Defense’

Early on in Riley Stearns’s “The Art of Self-Defense,” a milquetoast accountant, Casey Davies (Jesse Eisenberg), is beaten to within an inch of his life while on a late-night dog-food run. So he does what any man with deep-seated anxiety and a feminine-sounding name might, and enrolls in karate classes. “I want to be what intimidates me,” he explains.

But Sensei (Alessandro Nivola) pushes that notion to the extreme — transforming Casey from the office dweeb into what some might consider a better man. Or at least a more forceful one, who finds strength in his newly earned yellow belt even when he’s outside the dojo walls.

Inside is another story, Casey discovers when he becomes Sensei’s money man and enters his sinister inner sanctum. Diving into the absurd, Stearns creates a demonically comic study of toxic masculinity, and the men and women — in this case, Imogen Poots’s perennial brown-belt — who can’t escape its clench.

“The Art of Self-Defense” opens on July 12 in New York, Los Angeles, San Francisco and Austin, Tex., before a national rollout on July 19. KATHRYN SHATTUCK

Classical music offerings tend to thin out in New York City in the summer, as festivals like Tanglewood and Glimmerglass lure audiences. But five years ago, the Chamber Music Society of Lincoln Center introduced a smattering of seasonal concerts, billed as Summer Evenings, to tide over fans who would prefer to remain in the city. Though their programming may be conservative, the Summer Evenings do offer some additional balm for the heat­­­­­­ — the performances, at Alice Tully Hall, include post-concert wine receptions. For the final evening on Wednesday, the stellar guitarist Sharon Isbin joins the charismatic Calidore String Quartet for a rare quintet by Boccherini, which concludes with a vivid fandango, as well as a concerto by Vivaldi. The Calidore players complete the program with classic quartets by Haydn and Schumann. WILLIAM ROBIN