The Unspeakable Cost of Parenthood

I’m on vacation this week, so I asked fellow NYT Parenting editor Katherine Zoepf to take the wheel. In this newsletter she’s writing about the financial challenges of parenthood, and we’d love to hear from you about what money issues keep you up at night. Email us here with your stories. 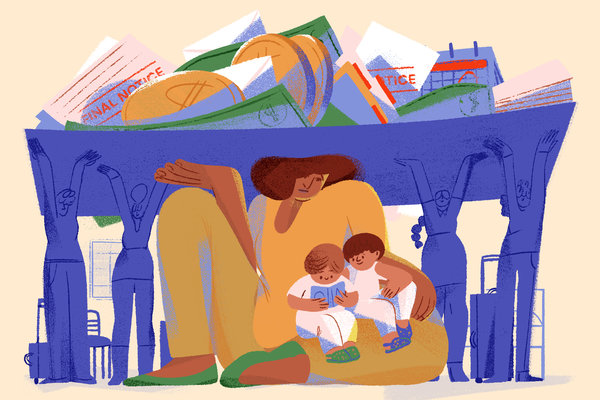 One morning in May 2016 — having unexpectedly become a single parent several months earlier, and sick of lying awake nights trying to mentally balance my household budget — I did something that, at the time, felt drastic and slightly shameful. After taking my 5-year-old to school and my 2-year-old to day care, I returned to our fourth-floor walk-up, tidied the place quickly and took what I hoped were some appealing photos: of our kitchen table with its pottery bowl of fruit and cheap, knockoff Eames chairs; of our overstuffed bookshelves; and even of our tiny bathroom, with the map-of-the-world shower curtain my daughter loved to inspect at bath time. Then I went online and opened an Airbnb account. “Private room in family home,” I wrote, posting my own bedroom on the service. (My kids preferred having me squashed into one of their bunk beds anyway, I reckoned, and we needed the money.) Within a couple of hours, I had my first booking request: from Mathilda, an opera singer from Indiana who’d be coming to New York for auditions the following week.

For about 15 months, the extra income this Airbnb arrangement generated was a lifeline for me and my children, a way to stave off financial catastrophe during a tricky transition in our lives. And, for the most part, it was also a lovely experience. Almost without exception, the women who stayed with us were considerate and kind. My kids grew so fond of a couple of them — Laura, a Danish graduate student who stayed with us during her two-month internship; and Sara, an Italian pediatrician who had a six-month research fellowship at Mount Sinai — that they became honorary “aunts,” a status they retain to this day. Yet, until now, I’ve avoided speaking of the year-and-change I spent “taking in lodgers,” as my mother calls it.

I’ve been thinking about my Airbnb side hustle again in recent weeks because, here at NYT Parenting, we’ve been talking a lot about the intersection of money and family life. Type “finances” and “parenting” (or any number of related combinations) into a search bar, and the first page of results will include a half-dozen upbeat articles advising you on how to put your financial house in order before you even consider reproducing. According to the dominant public narrative, this is what responsible prospective parents do: They pay off all their student loans; they purchase “forever” homes; they’re already thinking decades ahead, making the sort of safe investments that will allow them to comfortably cover their children’s college tuition.

But, according to the data, this is not how most Americans with young children are actually living. When NYT Parenting partnered with YouGov to create an online survey of parents in the United States, it found that the costs of preschool and day care represented a “very significant” or a “somewhat significant” financial strain for nearly 60 percent of us. A 2018 online survey of 1,000 parents in the United States conducted by Credit Karma, a personal finance company, found that 67 percent of respondents had gone into debt in order to buy their children necessary items such as food, clothes and shoes. Revealingly, some 69 percent of those surveyed by Credit Karma said that they kept their child-related debt a secret, and avoided discussing it with other parents.

If most American parents are struggling financially, why do so many of us feel alone in these struggles? Everyone knows that raising children is wildly expensive, so just what is it about money difficulties that feels so unspeakable, when you’re a parent? In an effort to answer these questions, I reached out to Sa’iyda Shabazz, a Los Angeles-based fellow at the Center for Community Change, a community organizing nonprofit, who has written eloquently about her own financial troubles as a single mom.

Shabazz believes that some of the sense of stigma parents experience comes from our fear of burdening our kids. “You don’t want to fail them,” Shabazz told me. “I don’t ever want my son to see me crying, wondering if I can keep the lights on this month.”

But much of it, Shabazz argues, is the result of our cultural attachment to the idea that if we graduate from college and work hard, we will inevitably succeed. “There are so many of us that are one paycheck away, one accident away, one wrong move away from really being in trouble,” Shabazz said. “But we’re afraid to admit it. People don’t want to confront the fact that it’s not the individual’s fault, it’s the system’s failings.”

According to Emma Johnson, who has built a career offering financial and professional advice to single moms via her website, “Wealthy Single Mommy,” parents’ shame around financial struggles is often bound up with a sense of ambivalence about mothers who work, and exacerbated by a culture that fetishizes intensive parental involvement. “It’s still a status symbol in many communities to be a stay-at-home mother,” Johnson told me. Some of the single moms of young children she works with, Johnson said, feel guilty about their difficulties providing for their kids and about working outside the home.

“There’s a lot of stigma,” for working single parents, in particular, said Shabazz, who freelanced from home when her son, now 5, was a preschooler, because she couldn’t afford child care. “But there’s also a lot of people saying, ‘I don’t know how you do it.’ And I’ll think, ‘Do you really want to know how I do it?’ Netflix is the babysitter, and I keep him steadily stocked with snacks.”

P.S. Here at NYT Parenting, we do really want to hear how you do it. What financial issues most worry you, as a parent? Have you found a side hustle, budgeting strategy or genius child care/time management hack that helps you manage these anxieties? Please email us here with your stories.

P.P.S. Forward this email to a friend. Follow us on Instagram @NYTParenting. Join us on Facebook. Find us on Twitter for the latest updates. Read last week’s newsletter, which is about managing tough school drop-offs.

Want More on the Intersection of Money and Family Life?

We have a guide from Diane Mehta on filing for child support as a single parent. “According to the United States Census Bureau, only half of custodial parents have legal or even informal child support agreements,” Mehta writes. “Two-thirds of parents who have filed got some support from noncustodial parents, the Census Bureau found, but only 44 percent received the full amount.”

Our colleagues in NYT Opinion examined what middle class life looks like for American families today.

The Times’ Claire Cain Miller looked at how financial insecurity — and, in particular, the cost of child care — is shaping many American parents’ decisions about how many children to have.

Journalist and anthropologist Brian Goldstone has written a searing piece for The New Republic on the housing insecurity that an increasing number of American families are now facing.

Bobbi Dempsey wrote a beautiful essay for the Times on the challenges of life on public assistance as a child and as a parent.

Parenting can be a grind. Let’s celebrate the tiny victories.

My son had a meltdown after his banana broke in half. I offered up a new banana to no avail. He demanded I fix the original one. I remembered we had some leftover coffee straws and used one to piece the broken banana together. Meltdown stopped immediately upon presenting the fixed banana.

If you want a chance to get your Tiny Victory published, find us on Instagram @NYTparenting and use the hashtag #tinyvictories; email us; or enter your Tiny Victory at the bottom of this page. Include your full name and location. Tiny Victories may be edited for clarity and style. Your name, location and comments may be published, but your contact information will not. By submitting to us, you agree that you have read, understand and accept the Reader Submission Terms in relation to all of the content and other information you send to us.