Welcome to the T List, a newsletter from the editors of T Magazine. This week and next, we’ve turned it into a Valentine’s Day gift guide, with recommendations from T staffers and contributors on what to give your loved ones — or yourself. Sign up here to find us in your inbox every Wednesday. And you can always reach us at [email protected].

A Century’s Worth of Rom-Coms 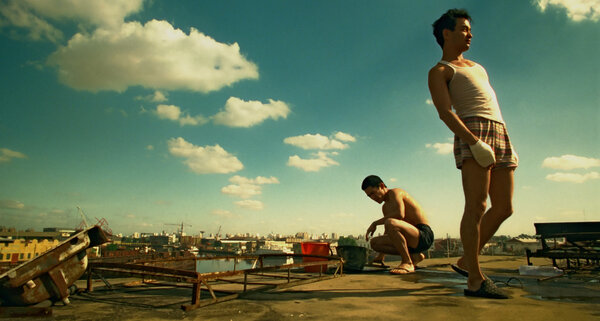 “The romance of movies is not just in those stories and those people on the screen,” the critic Pauline Kael observed, “but in the adolescent dream of meeting others who feel as you do about what you’ve seen.” In the era of Covid, the prospect of meeting others feels more dreamlike than ever, which is why I’ve derived so much comfort from my subscription to the Criterion Channel. It’s one of the few streaming services whose offerings seem to have been curated by a human hand rather than by a sullen droid, and its terrific interview series, “Adventures in Moviegoing,” can make you feel as if you’re dawdling under the marquee after a packed screening, eavesdropping on enviably witty New Yorkers. Idiosyncratic retrospectives and themed series rotate onto the channel monthly, and the service currently features a handful of formally perfect romantic comedies, from “Smiles of a Summer Night” (1955) to “Harold and Maude” (1971) to “Monsoon Wedding” (2001). More impressive, perhaps, is the selection of breakup movies — among them François Truffaut’s ridiculously pleasurable “Bed and Board” (1970), Greg Mottola’s shoestring indie comedy “The Daytrippers” (1996) and Wong Kar-wai’s New Queer Cinema landmark “Happy Together” (1997) — that shuck off familiar tropes in an effort to capture deeper, and often unsustainable, intimacies. For more old-fashioned romantics, the channel has just added a septet of 1930s classics starring Marlene Dietrich. It’s intoxicating to watch Dietrich at her mythic peak, more reincarnated pharaoh than actress, performing grand romantic gestures that often have nothing to do with men. In “The Devil Is a Woman” (1935), she dashes through a town square buried in Strega Nona quantities of confetti; in “Dishonored” (1931), having been sentenced to death for espionage, she demands that the prison guards supply her with a piano. The real Dietrich apparently made carbon copies of her love letters to paramours so that her husband could enjoy them; new subscribers to the Criterion Channel will find themselves reveling in a similar influx of loot.

A New Line of Surrealist Jewelry and Amulets

This week, the Los Angeles-based designer Sophie Buhai is entering into the rarefied realm of fine jewelry with the debut of a 13-piece, 18-karat gold collection. Some of Buhai’s creations, such as her chain bracelet, hoop earrings, chain necklaces, egg pendants and rings, are more traditional and what you’ll want to buy and wear forever. But others — including a nose brooch, a tiny comb with a spiral handle and a nautilus-shaped pill box — are meant more as decorative objects that could be placed on a stack of books, say, or on your dresser next to a bottle of perfume. The inspiration for these sculptural forms came from a more antiquated type of jewelry: “I’m very drawn to ancient Roman amulets,” explains Buhai, “which could be left in a field to help bring you a good season of crops, or on a rooftop to protect you.” The designer launched her namesake line of silver and gold-vermeil jewelry in 2015, so the brand’s devotees, of which there are many, are already familiar with her gestures toward Modernist and Surrealist designs from the last century, such as those by Man Ray and Salvador Dalí. For this new venture, she wanted to move into an even more conceptual and symbolic space. “I was interested in approaching jewelry from a more artistic lens,” she says. But whether they are art, amulet or jewelry, these lasting and beautiful pieces make the perfect gift for a loved one — or oneself.

Forgive the cliché, but I truly believe some of the most romantic afternoons of my 20s were those spent wandering along the Seine, alone but for a large baguette. Seeing, however, as the pandemic has forced us, as Billy Crystal once urged, to forget Paris, I’m willing to settle for just the bread part. Thanks to the Baguette Baking Box, I’ve even started making my own, and have never felt so competent. It used to be that making good French bread in a home oven required a pan of water or a spray bottle — it’s steam that allows the crumb to expand — as well as ample time for kneading and a laissez-faire attitude about the results. Then, in the mid-2000s, Jim Lahey of Sullivan Street Bakery popularized his no-knead method, which empowered any novice baker with a lidded pot to make excellent boules. “But I’ve always been partial to the baguette shape,” says Dean Anderson, an artisanal metalsmith based in New York’s Hudson Valley. And so he designed a “simple, workmanlike” stainless-steel container large and oblong enough to fit a pair of baguettes. First you place your dough in the preheated box with two ice cubes; after baking it for about 24 minutes, you remove the cover and bake for an additional 18 minutes, which yields a delectable golden crust. Anderson and his assistant, Amy Lahey (no relation to Jim), bend, weld, grind, polish and rivet each of the boxes in their workshop in Newburgh, N.Y., and are often told that the finished products work a little too well. As for Anderson? “I had to change my diet,” he says. “So now I only eat bread.”

The decoupage artist and home goods retailer John Derian is known for designing trays and paperweights, among other items, embedded with the charming imagery that he has collected over the years. Cut from paper, collaged and set under handblown glass by a small staff of trained artisans, the images are transformed into the perfect desk companions. This Valentine’s Day, there’s a new selection to choose from: Old English roses and Victorian hearts abound, but my favorite designs are the text-based ones, with quick little missives strewn across their front. Some of the messages amassed by Derian were originally typed on a rickety old manual typewriter (like the one that reads “A dozen roses”), while others were inked in beautiful calligraphy (“I love you all”) or printed in blocky newsprint (“There’s no harm in kissing”). You might want to steer clear of those that hint at a messy breakup (“Sorry to appear insistent, but I must have my trinkets”), unless, of course, you share Derian’s sense of humor.

A Fragrance That Combines Botanicals and Biochemistry

Despite our visual nature, humans have only three types of light sensors, but about 400 for scent, a fact that helps explain the intimate link between aroma and memory. Christine Nagel, the perfumer for Hermès, is well aware. She stands out in her field for her background in biochemistry, which has long informed her approach to perfumery, one driven by both science and emotion. Her new men’s fragrance for the brand, called H24, which combines natural botanicals and molecular elements, is no exception. It intentionally moves away from the woodiness common in many scents for men, instead privileging notes of clary sage — which “has a depth, intensity and elegant texture that the more mundane garden sage does not,” says Nagel — as well as those of narcissus and rosewood. She also added sclarene — a naturally derived diterpene (a chemical compound produced by plants, animals and fungi through biosynthesis) with a smell reminiscent of the hot irons of a busy atelier. The fragrance was inspired by the various men’s wear collections that Hermès’s artistic director, Véronique Nichanian, has designed for the house, and it’s easy to see where the two converge: Both evoke a softer masculinity liberated from repetitive tropes. Nagel adds that Nichanian “offers extraordinarily contemporary fusions of cashmere and leather with no visual seam — it’s a kind of gradual fade that I particularly like to use in my fragrances.” Indeed, one alluring note of H24 blends effortlessly into the next, creating a combination that is nothing short of alchemy.

In Ewe, spoken in parts of Togo and Ghana, midunu means “let’s eat!” It’s a declaration inviting everyone within earshot to gather around the table — and an apt name for Midunu, an Accra-based lifestyle company that hosts both private events and pop-up dining experiences for the public. Founded by the local chef Selassie Atadika in 2014, the brand also extends the idea to those farther afield in hopes of inspiring people around the world to delight in the pleasure of eating and the beauty of Africa. Its latest offering, a gift box of vibrantly colored artisanal chocolates, brings the continent’s wide range of flavors — spicy, sweet, earthy, mellow, salty — to your doorstep. A blend of local ingredients like those of moringa, prekese, rooibos and berbere with velvety ganache, Atadika’s handmade confections are each named in honor of an African woman — like the chai-infused Wangari truffle, named for the Kenyan activist Wangari Maathai; or the ginger, honey and dark chocolate ganache, called Yaa after the early 20th-century Ashanti queen Yaa Asantewaa. Also available are tasting kits that allow you to sample different treats while testing your ability to determine their contents. Each one comes with cocoa nibs, four six-piece boxes of assorted chocolate truffles, a tasting guide and video, an answer key and more. For Atadika, it’s all about encouraging others to slow down and explore. “You have to really engage all of your senses to get the full taste,” she says.

fashion for a cause

Totes That Give Back to the Women Who Make Them

Traditional Indian crafts are at the heart of SMR Days, a new London-based line of understated but elegant men’s wear designed to be worn on holiday. “In our first collection alone, we worked with bandhani, a tie-dye technique; by-hand block printing; and kantha embroidery, a distinct dotted stitching style,” the brand’s chief marketing officer, Adam Shapiro, says of the line’s bohemian, relaxed separates, cut from silks, linens and cottons in colors that evoke the sand, sea and sun. During the first wave of lockdowns last spring, the brand’s co-founders — Shapiro, a veteran fashion publicist; Dan May, a creative director and former style director of Mr Porter; and Gautam Rajani, previously a vice president of international business at DVF and commercial director for Dundas — began researching small artisanal workshops and fell in love with Maison Bengal, a cooperative developed to fight poverty in Bangladesh by employing over 500 local craftswomen (mostly mothers and young women), who make everything from baskets to fabric. Now, SMR Days’s first accessories collection has arrived: two limited-edition striped totes hand-woven by the artisans at Maison Bengal from jute, a sustainable resource that requires much less water than most other natural fibers. The material is also quite durable, a trait vital to the ethos of SMR Days, which hopes that, in time, customers will take its wares on their trips year after year. For the month of February, all profits from the bag will go to the women who produced them.