The Artist Who Transforms Galleries Into Forests and Fields

“It was the freshest breath of air I’d taken all year, in that closed room with all the snails,” says the artist Precious Okoyomon, recalling the setting of their recent exhibition “Earthseed,” at Frankfurt’s Museum für Moderne Kunst’s Zollamt gallery. The entire floor of the former customs office was covered with several feet of topsoil and in it Okoyomon, 28, had planted a dense green blanket of young kudzu plants, the cultivation of which is illegal in much of the United States, where the legume is considered an invasive species. Imported from Amsterdam, these kudzu roots were laid over the course of several weeks last spring, then left mostly alone.

When Okoyomon, who lives in Brooklyn, returned to Europe for the opening five months later, the vines had grown exponentially and nearly enveloped the six human-size yarn and lamb’s wool sculptures of angel-like figures that the artist had built and installed around the space. Other life had established itself among the leaves, too. Crickets made their music, butterflies flitted about and, yes, snails moved in, leaving their viscous trails atop the brush. At a time when the global environment is on the brink of collapse, the work was a reminder of, among other things, our inextricable “entanglement with nature,” as Okoyomon puts it, and offered a modicum of hope by affirming its chaotic resilience.

Such immersive habitats have become a key facet of Okoyomon’s multidisciplinary practice, which has encompassed everything from books of poetry incorporating text speak to edible ball gags made from frozen cold-pressed cucumber juice. Indeed, though they have only been exhibiting for three years, they have already created massive site-specific installations that have transformed entire rooms and galleries into spaces for play, respite and reflection. “I make worlds,” Okoyomon says. “Everything, every portal I make, is its own ecosystem.” As one of the three chefs who constitute the queer cooking collective Spiral Theory Test Kitchen, Okoyomon prepared a surreal banquet (dishes included fermented yuzu rinds and fried fish bones) in the 17th-century Palazzo Corsini in Florence, Italy, last year, before much of Europe shut down, as a prelude to a Telfar fashion show held there; after dinner, the models walked along the surface of the large circular table, which was still strewn with remnants of the feast.

But even in the artist’s dreamlike parallel universes, the darker truths of our own world can be sensed. In 2019, for Okoyomon’s first institutional exhibition, which also happened to be their first solo show, they established a small forest in Zurich’s Luma Westbau arts space. Trees sprouting from dirt mounds were spotlighted and surrounded by orbs of black resin and cotton in a reference to New York City’s 18th-century Lantern Laws, which required people of color to carry lamps when walking after dark, and helped pave the way for today’s surveillance culture. Strung up from the branches by rope nooses were stuffed animals adorned with taxidermy bird wings, which resembled angels in flight. Though it can be challenging and often teems with anxiety, the artist’s work is almost always cut with a sense of childlike mischievousness and warmth, even when the subject matter is deadly serious. “I still want everybody that enters that space to feel held by the endless love,” they say.

Okoyomon has discovered a fondness for kudzu, which has become a recurring motif in their recent installations. Native to the subtropical and temperate areas of Japan and other parts of Asia, it was planted widely in the American South in the 1930s and ’40s to combat the erosion of the region’s soil, which had been degraded by years of cotton cultivation during slavery. Once the vine was displaced from its home, though, its growth became untenable: it strangled and swallowed everything in its path. In the decades since, kudzu has become a generative symbol to writers and artists for the inequalities that still plague the country at large. In a 1973 piece for The Times, the author Alice Walker compared the plant to racism, writing that “if you don’t keep pulling up the roots, it will grow back faster than you can destroy it.” In Okoyomon’s flipped version of this metaphor, Blackness itself is the vine, taking root in an inhospitable culture it nevertheless manages to revitalize or, as is written in the press release for “Earthseed,” it’s something that is “indispensable to and irreconcilable with Western civilization.” Alongside other nonnative species, the plant will feature prominently in a rooftop garden at the Aspen Art Museum as part of an exhibition that Okoyomon will reveal there in June, despite neighbors’ complaints that the invasive varieties might spread and disrupt the local ecosystem. “There is a lot of fear about plants that people don’t understand,” the artist says.

And so, in Okoyomon’s work, organic materials serve a dual purpose: they remind us of our violent histories but also celebrate nature’s ability to adapt and flourish in the face of man-made crises. Immediately following the closing of the artist’s Frankfurt exhibition, the kudzu planted for it was cremated and illegally imported to New York in a trash bin sealed with duct tape. Okoyomon then boiled down the remains to a thick, muddy juice and filtered them through a coffee strainer for their new piece “Fragmented Body Perceptions as Higher Vibration Frequencies to God,” on view now at Performance Space in New York, where the material is being distributed by an overhead snowblower throughout the venue’s fourth-floor gallery, fluttering down onto a bank of soil and stone with a small brook flowing through its center. Pillars of stacked rocks rise from the ground like tombstones, or fists, serving as monuments to lives lost in a year of spectacularized death. And yet, as the ash falls, small fish living in the stream’s basin swim to the surface to feed on the particles. “I attach myself to materials such as earth, rocks, water and fire because these are things I can’t control on my own. They’re just free,” Okoyomon says. “I need to stay in the ever-looping spiral of chaos to keep producing new magic.” 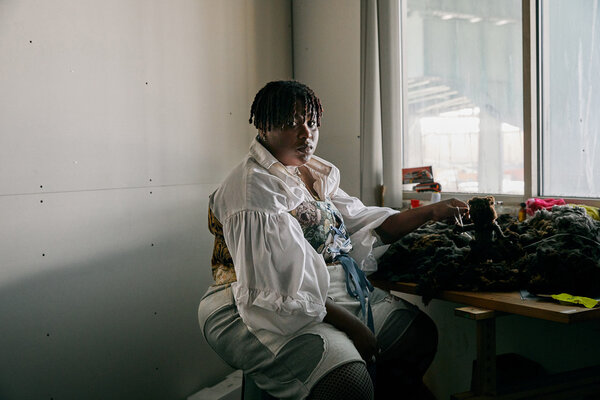 Chaos is a concept that comes up often in conversation with Okoyomon. The artist was born in London but spent their early years with their mother in Lagos, Nigeria. From a young age, they read everything they could get their hands on, starting with the family Bible, and this passion soon led Okoyomon to compose small nuggets of writing that they call “little dismembered language drops.” “I would write poems and hide them all around the house and the backyard. I didn’t use my words for a year,” the artist says. “If I needed to say anything, I would write these really serious letters to my mom.” The family moved to Houston in 2000, and to West Chester, Ohio, six years later. In high school, Okoyomon had an emo phase and after striking a bully with a fencing saber, they were forced to transfer. The artist later relocated to Chicago to attend the Great Books college Shimer, where they studied philosophy. “It gave me a lot of freedom to get really weird,” they say. “And for my chaos to fully present itself.”

When they first moved to New York in 2017, they would go on exploratory walks and record their reactions to the city’s sights and sounds in notes on their iPhone, composing “crazy fanfic poems,” they recall. The artist incorporated these inventive writings into their first poetry collection, “Ajebota,” which was published by Bottlecap Press in 2016 and includes a piece composed entirely of screenshots of text messages. Today, Okoyomon works in a shared studio in an industrial complex in Park Slope that they describe as “a cozy little cave of my ideas.” Papers bearing snippets of poems are scattered across tables and stapled to the walls. There’s an earthworm farm and thus a constant supply of fresh dirt. And for one work in progress, Okoyomon is lovingly nurturing, in a glass jar, a crop of algae that glows in the dark. “I really want to make this piece that’s a whole bioluminescent floor,” they explain, “where you can sit and feel its communication.”

If Okoyomon’s work continually asks us to listen to the natural world, it also contains warnings of what might happen should we fail to act. “If we don’t start really imagining how things could be seriously different for us, the world will do it for us,” they say. “And then we’ll feel really bummed out when we didn’t do the very simple and small work of just dreaming.” But establishing a new order will involve some degree of destruction — namely the demolition of structures that suppress and exploit — which is why Okoyomon thinks often of the apocalypse. Their first play, a conceptual composition about four angels that fall to Earth, was commissioned in 2019 by the Serpentine Galleries and called “The End of the World.” And for the forthcoming iteration of Frieze New York, Okoyomon, who won this year’s Artist Award, has collaborated with the Los Angeles-based industrial designer Jonathan Olivares to fill the 17,000-square-foot McCourt performance hall at the Shed in midtown Manhattan with spire-like structures made of steel and camouflage netting arranged in a loose circle. Inspired by the Tower of Babel, an origin story for the world’s multiplicity of languages found in the Book of Genesis, Okoyomon recited a poem from their “Sky Songs” series from atop one of the platforms in late April, and a video of the performance, which also includes readings by other poets, including Eileen Myles and Diamond Stingily, will play at the Shed and in Frieze’s online viewing room starting May 5. The words clash and meld with the sound of a string trio performing the French composer Olivier Messiaen’s 1941 “Quartet for the End of Time.”

“It’s about destroying our language, building it up, crashing the words into each other,” Okoyomon says. “How do we create the language to get to the new world? Because it’s one thing to imagine it, but how do we collectively listen, see new languages and hold space for them?” While their work may seem wistful at times, Okoyomon demonstrates in a tangible manner, by transforming these vast spaces and activating them with their verse, just how possible it is to reconfigure the world around us. Change, they seem to suggest, can begin small, with a word, or a delicious breath graciously given by a field of kudzu. “Everything is built and started from a poem,” they say. “It’s an endless poem.”

Precious Okoyomon’s “This God Is a Slow Recovery” will be on view as part of Frieze New York from May 5 to May 9 at the Shed, 545 West 30th Street, New York.