Taiwan Was a Covid Haven for Performers. Then Cases Flared.

TAIPEI, Taiwan — For much of the past year, Taiwan has been a sanctuary for performing artists, the rare almost-Covid-free place where audiences could cram into concert halls to hear live music and sip coffee together at intermission.

The island played host to modern dance festivals, full-fledged productions of “La Traviata” and “The Phantom of the Opera,” and a recital of Bach’s cello suites by Yo-Yo Ma, which was attended by more than 4,000 people.

But a recent surge in cases — Taiwan’s worst outbreak since the start of the pandemic — has brought a halt to cultural life on the island, forcing performing arts centers, concert halls and museums to shutter just as they are coming back to life in the rest of the world.

Performers from Taiwan and abroad have been caught in the middle, grappling with lost income and an avalanche of canceled engagements.

“Everything blew up,” said the American clarinetist Charles Neidich, who recently made the 7,781-mile trip from New York to Taipei only to have his first live performance in more than 400 days canceled.

Neidich, who had been engaged to play a clarinet concerto by the American composer John Corigliano with the Taipei Symphony Orchestra, endured two weeks of hotel quarantine, one of the strict measures that had helped Taiwan tame the virus. Then Taipei went into a state of semi-lockdown last week, so he packed up and went home.

“This is my non-adventure,” he said.

The outbreak, coming as the government’s vaccination program has gotten off to a slow start, is forcing Taipei to shut down just as other cities around the world are finally reopening. In London, the theaters of the West End brought up their curtains last week. Officials in New York announced that Radio City Music Hall would soon allow full capacity, maskless crowds back inside, as long as they have been vaccinated. 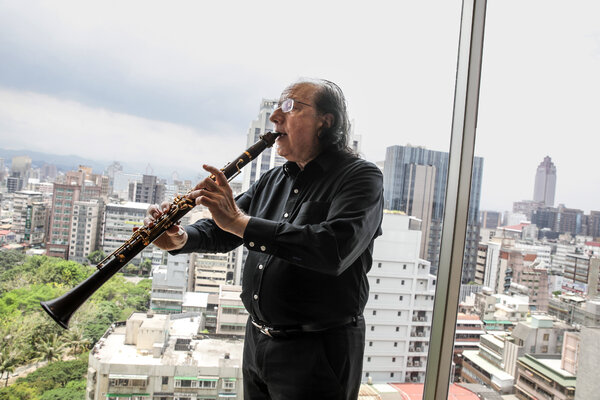 Taiwan’s experience is a reminder of the ongoing uncertainty of life in the pandemic, the threat posed by the virus and its power to upset even the most carefully crafted of plans. Semi-staged performances of Verdi’s “Falstaff” have been called off. The French musical “Notre Dame de Paris” has been postponed.

Even though the number of cases in Taiwan is low compared with many parts of the world — 283 cases were reported on Tuesday, fewer than in New York City — the authorities are doubling down on restrictions, hoping that lockdowns can bring the virus under control within weeks or months as Taiwan tries to speed its lumbering vaccine rollout.

Artists are optimistic that concerts, dances, plays and museum exhibitions will soon return.

“This is a place used to earthquakes and typhoons,” said Lin Hwai-min, the founder of Cloud Gate Dance Theater, a contemporary dance troupe, which has delayed performances until later in the summer. “The crisis comes, you deal with it and you come back to restore everything.”

Over the past year Cloud Gate has suffered financially from the cancellations of its planned tours to the United States and Europe. But with infections near zero in Taiwan and residents hungry for entertainment, the company has offset those losses with strong demand at home, premiering new works before sold-out crowds.

“It used to be so surreal that we could perform,” Lin said. “Now for the first time we are confronting the reality of the virus, like our peers in Western countries.”

Taiwan’s closing of its borders early in the pandemic and its strict public health measures, including mask mandates and extensive contact tracing, turned the island of 23.5 million into a coronavirus success story. But the emergence of more contagious variants in recent months, a relaxation of quarantine rules and a vaccine shortage gave the virus an opening.

Before that, the lack of widespread transmission in Taiwan made it easier for performance venues to operate near full capacity. And theaters and concert halls enforced tough public health measures that have been adjusted depending on the number of confirmed cases.

At many venues, attendees were required to provide their names and phone numbers to be used for tracing in case of an outbreak. Masks and temperature checks were required. Some concert halls barred the selling of food and drinks. Seats at some spaces were staggered to resemble flowers, in an arrangement that came to be known in Taiwan as “plum blossom seating.”

Despite the vigilance, there were occasional scares. More than a hundred people were forced to quarantine in March of last year after coming into contact with the Australian composer Brett Dean, who tested positive for the virus after performing in Taiwan. The incident was front-page news in Taiwan, with some people fuming that Dean — whose “Hamlet” is scheduled at the Metropolitan Opera in New York next season — had been allowed to perform even though he had a cough.

Lydia Kuo, the executive director of the National Symphony Orchestra, which collaborated with Dean, said the scare taught the orchestra the importance of maintaining strict health measures even when infections were near zero.

“We were facing an unknown enemy,” she said. “We were lucky to face this reality very early.”

Taiwan’s still-active cultural scene attracted talent from around the world over the past year when many artists were without stable work and confined at home. There were visits by the Chamber Music Society of Lincoln Center, the German organist Felix Hell, and Ma, the renowned cellist, who chartered a flight to the island for a tour in November.

Many musicians with roots in Taiwan have also returned, some for an extended visit. Ray Chen, a violinist, came back in August at the urging of his family and has taken part in about 20 live concerts, master classes and music education outreach events since then. He said he was struck by the care people showed toward one another and the widespread adherence to public health rules, even when Taiwan went months without any reported infections.

“Everyone is willing to play a part,” Chen said. “Everyone values life.”

Taiwan’s strict approach has not been popular in all corners of the artistic world. After the outbreak this month, some artists questioned the government’s decision to close performance venues, concerned that it would hurt performers’ income.

Lang Tsu-yun, a Taiwanese actress who leads a theater troupe, provoked controversy when she suggested, in a sharply worded Facebook post, that the restrictions would be devastating to arts groups.

“Do you know how long we rehearse?” Lang wrote. “Do you know how many of us are working hard?” (After coming under criticism for her comments, Lang deleted the post and apologized.)

The government has provided tens of millions of dollars in subsidies to arts groups during the pandemic, but some performers say the grants have not been enough to offset losses. Officials say restrictions on large gatherings are necessary to curb the rising rate of infections.

But for visiting performers caught in the middle of the latest surge, the experience has been frustrating.

The violinist Cho-Liang Lin was excited to arrive in Taiwan last month, his third trip to the island since the start of the pandemic. After livestreaming for months and playing in empty halls in the United States, where he lives, he had come to relish the energy of live performances in Taiwan, where he was born, despite the mandatory quarantine.

Then this month, Lin’s concert with the Taipei Symphony Orchestra, with which he was going to perform Korngold’s Violin Concerto, was canceled two hours after his first rehearsal. He was also forced to cancel a summer festival for young musicians that he leads in Taipei. He was devastated, going out with friends to drink Scotch.

“All that work and waiting around went for nothing,” said Lin, who returned home to Houston last week. “I can’t help but notice the irony here. The model citizen of the world now has become a bit of a problem child.”