International art fairs may be the shopping malls of billionaires and celebrities, but they also provide an equal and rare opportunity for all who attend to spend time with art that may not be seen again for decades and to catch glimpses of history that, in some places, remains underexplored.

Even with fewer exhibitors this year, Art Basel Hong Kong offers a number of fruitful byways for local visitors and remote viewers to venture down as it runs this weekend. Among them is radical art in postwar Japan, a moment when artists were reimagining homegrown styles and techniques while incorporating avant-garde developments from Europe and the United States.

Taking part in a Basel fair for the first time, the Shibunkaku gallery of Kyoto, Japan, has devoted its entire booth to Shiryu Morita (1912-98), who pushed calligraphy into the realm of experimental contemporary art. He brushed characters into vigorous gestural abstractions, used unorthodox materials such as metallic paint and worked in front of live audiences.

“The core idea of his calligraphic theories, I think, is Zen meditation, to reach a supreme state of absolute nothingness,” Sae Ryo, a researcher at the gallery, said in a video interview.

To promote his freethinking practices, Mr. Morita published a journal called Bokubi (Beauty of Ink), which was distributed internationally; co-founded the Bokujinkai artist collective in 1952; was in contact with far-flung peers like the American painter Franz Kline and the French artist Pierre Soulages; and demonstrated his work abroad, attracting some foreign supporters.

However, “the history of modernism remains largely Eurocentric,” Ms. Ryo said, and while international appreciation for Mr. Morita has picked up in recent years, he has not been exhibited widely beyond his homeland. 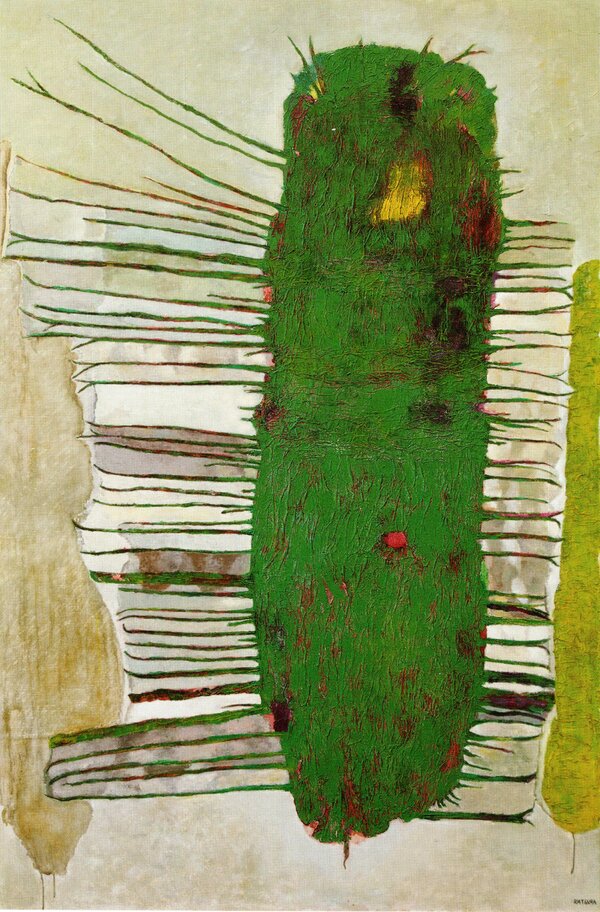 The same is true of Saori Akutagawa (1924-66) and Yuki Katsura (1913-91), trailblazing female artists who were active in Japan’s male-dominated vanguard art scene after the war, and whose art fills the booth of Nukaga Gallery, which has locations in Tokyo, Osaka and London.

“We have to make a stronger market for women artists,” Kotaro Nukaga, the owner of the gallery, said of his goal for the booth, which is the latest in a number where he has shown only female Japanese artists. “What we are doing is very important to enlighten collectors,” he said.

In the 1950s, Ms. Akutagawa made bold paintings of monstrous but oddly charismatic creatures and abstract forms, her work appearing alongside that of future giants like On Kawara and Yayoi Kusama. (Ms. Kusama is one of the very few Japanese women of the era to gain widespread fame.)

Ms. Akutagawa decamped to the United States in 1959 to study art, then returned to Japan in 1962. At 42, she died of pre-eclampsia, a hypertensive complication of pregnancy, the gallery said.

Ms. Katsura, for her part, made inventive collages beginning in the 1930s, incorporating fabric swaths, corks and sections of meticulously detailed brushwork. She also traveled widely in the 1950s, and in later work added eyes and other body parts to her abstractions, giving them the look of insects, animals or human caricatures.

Both artists have been the subjects of major retrospectives at Japanese museums, though their market has been limited — not only because of their gender but also because they did not join the best-known movements of the era and adopt their styles, Mr. Nukaga said.

Over the past couple of decades, curators and dealers looking beyond Western-focused narratives of modernism have spotlighted Japanese groups like Gutai, whose members in the 1950s favored expressive paintings, unconventional materials and captivating performances, like bursting through paper in a gallery setting or crawling through mud. The art world has also taken note of Mono-ha, whose artists worked with spare, elemental materials and processes, starting in the late 1960s. They have become part of an emerging global art history.

At Art Basel, Gallery Kogure in Tokyo is presenting sculptures made with hunks of steel and stone by Noboru Takayama, born in 1944, who works in the Mono-ha vein. Tokyo Gallery + BTAP, of Tokyo and Beijing, will have pieces by the Mono-ha figure Kishio Suga (also born in 1944) and the Gutai pioneers Yoshio Sekine (1922-85) and Atsuko Tanaka (1935-2005), who is most famous for her 1956 “Electric Dress,” a body costume of electric lights.

Mr. Nukaga’s business, established by his father in 1977, had long focused on European Impressionism and modernism. But seeing a 2012 Gutai show at the National Art Center, Tokyo, changed the course of his career as an art dealer.

“When I was a primary school student, I went to his gallery, and every day I could see Picasso, Chagall, even Andrew Wyeth,” Mr. Nukaga said of his father’s business. While he knew of the artists in the Gutai show, “I learned the depth and the variety of Japanese postwar art through that exhibition,” he said, and he soon expanded the firm into that messy, exhilarating period.

“Japanese postwar art is not only Gutai or Mono-ha or Kusama,” Mr. Nukaga said, listing some of the most high-profile names. “We have lots and lots of artists. Some of them are not good” — a statement that is certainly true everywhere — “but some of them are still waiting for their real appraisal.”