Parents can learn a lot from their kids — and Ryan Reynolds is no exception. In fact, per Entertainment Tonight, the Deadpool star credits his three daughters, with whom he shares with wife Blake Lively, for inspiring him to openly discuss mental health. 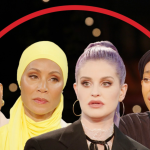 
Kelly Osbourne Opens Up About Her Struggle With Alcohol, Painkillers & Heroin

“I know I’m not alone and more importantly, to all those like me who over schedule, overthink, overwork, and over-worry and over-everything, please know you’re not alone,” Reynolds wrote in a post for Mental Health Awareness Month. “We don’t talk enough about mental health and don’t do enough to destigmatize talking about it. But, as with this post, better late than never, I hope…” he concluded.

On June 5, just some weeks after sharing his experience, Reynolds explained that it was mainly his daughters who influenced him to openly address his anxiety.

“I have three daughters at home, and part of my job as a parent is to model behaviors, and model what it’s like to be sad and model what it’s like to be anxious, or angry. That there’s space for all these things,” he told Entertainment Tonight. “Part of that is to de-stigmatize things and create a conversation around [mental health],” he continued. “I know that when I felt at the absolute bottom it’s usually been because I felt like I was alone in something I was feeling. So I think when people talk about it, I don’t necessarily dwell on it or lament on it, but I think it’s important to talk about it. And when you talk about it, it kind of sets other people free.”

The 44-year-old also said that he hopes to help others who may be going through something similar. “Other people feel like, ‘Oh, he’s feeling that and so am I.’ And even though we might be in two completely different fields or we might have two completely different lives, it connects us in a way,” he said. “A lot of it is just wanting to model certain things for my own kids and model things for anyone who might need to hear it.”

We so appreciate his honesty. Keep up the good work, girls!