Recapture The Thrill of Being on Wheels

First came the walks — and then, seemingly all at once, the wheels.

Back at the beginning of the pandemic with interminable lockdowns on the horizon, people broke up the monotony of their homestays with short jaunts on foot around the neighborhood just to get some sunlight and fresh air; or, as the writer Ruby Keane put it, “a stupid little daily walk just to feel something.”

But with the arrival of warm weather came a collective need for (relatively more) speed, in the form of bicycles, skateboards, roller skates and the like. Global shortages arose as manufacturers struggled to keep up with demand for recreational wheels, and this year is shaping up similarly, with supply chains already feeling the crush of spring sales.

Still, snagging these coveted items can be just the first hurdle to overcome. There has been a massive increase in first-time purchases of bikes, boards and skates, so many of the newly minted owners may need a little time to learn how to use the new equipment exactly right. Instagram lit up last summer with videos of beautiful people gliding gracefully around town on two or four wheels — often accompanied by a throwback soundtrack, in the vein of Instagram’s biggest roller-skating phenomenon, Oumi Janta — but simply staying upright is a challenge if you’ve never done it before.

So whether you’re 7 or 70, thankfully there are dedicated professionals out there who are passionate about teaching people to be less wobbly on their new wheels.

Tanya Dean, the founder of Skaterobics, a New York City-based skate school, can still remember the first time she laced up a pair of skates as a 20-something at a city roller rink in the ’90s. Packed as the venue was with experienced skaters, “the scariest part was getting on and off the floor without getting killed,” she recalled. Dean eventually figured out how to roll with the regulars, but these days she wants to make sure that her students have it easier than she did. 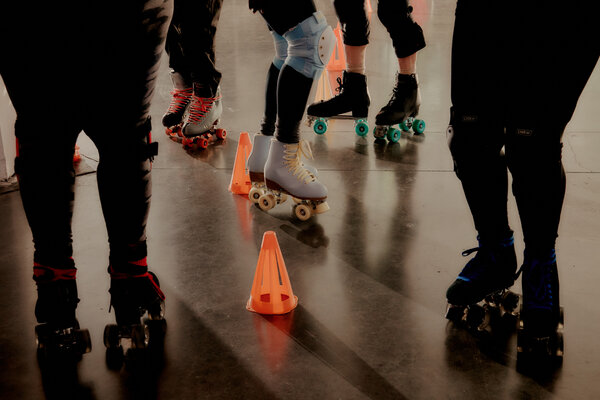 “Learning from people who just knew how to skate, they were showing you from their point of view,” said Dean. “Being an instructor and understanding body rotation, edges, weight transfer, control, balance and coordination is different.” Her adult clientele are a mix of people who skated during their youth but haven’t done it in decades, true first-timers, and those that can get around the rink but want to enhance their footwork.

Dean is also a former boxing champion, personal trainer and motorcyclist, but she has a simple reason for personal and professional focus on roller skating: “It makes you feel like a kid.” Even so, recapturing a bit of childlike joy can be a fraught experience once adult anxiety sets in. “We’re all coming into a new environment, we’re nervous, we’ve got preconceived notions — I’m aware of all that,” she said. She advises new students to maintain a positive attitude and refrain from judgment — of themselves or others.

Jitters and other concerns notwithstanding, instructors like Dean and O’Neal Ellerbe, a former professional skateboarder, find that adults continue to turn out in large numbers to conquer their fears on wheels. Ellerbe, the founder and lead coach of Skate-Everything School, has skateboarded with students up to age 60. “I think Covid was a big steppingstone for a lot of people,” he said. “It gave them the courage to step out of the box and try new things.”

Ellerbe learned to skateboard as a high schooler in Harlem when he asked a friend to teach him. “The next day, he called me at 6 a.m. and said: ‘I’m outside your house. I have a board for you. You said you wanted to skate, right?’ And I’ve skated every day since.” Skateboarding provided Ellerbe with “an independent challenge” and “a way of being free, in a sense,” but above all else he aims to make the experience fun. Many of his classes end with the group competing in a butt-boarding race to the bottom of a gently sloped hill — a silly, exhilarating and low-stakes way to blow off steam after practicing Tic Tacs and kick pushes.

After months of small group classes, Ellerbe is looking forward to bringing even more new skaters into the fold as social distancing measures in New York City loosen up. “I’m excited about bringing demos back, bringing some events to get the community stoked,” he said. Old stereotypes die hard, and Ellerbe knows that many still have a knee-jerk negative reaction to skate culture and its denizens, but he sees an increased interest in skateboarding as a chance to shift the sport’s perception. “Maybe this is the opportunity that’s been long needed,” he said. “This is a hobby to some, a love for some, a form of transportation,” he said. “It’s impacting millions, and I think it’s beautiful.”

While some instructors contend with unfavorable misconceptions about what their sport represents, Andree Sanders — also known as “Bike Whisperer NYC” — sees her work as more of a mental challenge than anything else. “I talk a lot about the amygdala and the frontal cortex and the different chemical balances of the brain, and how that affects our body and our mind-body connection,” she explained. “You are the eye and the brain of the bike, and the bike becomes your legs. And it’s that partnership and understanding, and that trust, that allows you to really be able to relax and ride.”

Sanders was taught the basics of bike riding as a kid and rode throughout her childhood, but “not with the joie de vivre that one would expect.” It wasn’t until her future husband introduced her to mountain biking while they were dating that she rekindled her love of cycling. Over the years, Sanders estimates that she’s taught thousands of people from around the world, but she particularly enjoys working with adults. “Teaching an adult how to ride a bike is like handing over my superpower to them,” she said. “It gives them the sense of freedom and confidence to go places that they would never go before.”

If you’ve made the decision to learn to bike, beware of programs that insist you can be taught in a set amount of time. Sanders is adamant about letting each and every client set their own pace when it comes to learning, as missing a predetermined mark can lead to frustration. “It’s a process, and nothing’s instantaneous. And everybody’s process is different.” Last year, Sanders taught her oldest client yet — a 78-year-old woman who was desperate to get out of the house — as well as a number of essential workers who needed to ride to work when commuting via subway wasn’t an option.

“It’s the most amazing thing, because it allowed them independence, safety and control, which we didn’t have. Last year was so challenging because we had no control,” she said.

Perhaps it’s that much-needed sense of self-determination that leads us to get on wheels, even as children — the feeling of being able to steer one’s own ship when most everything else is out of your hands. Of course, there are other perks that won’t necessarily dissipate once the world gets back to something like normalcy. Dean listed them while describing what her students get out of roller skating, but it could just as easily apply to skateboarding and biking, too. “It builds confidence, it builds community, it’s social networking … it’s exercise … so much stuff that contributes to our well-being,” she said — none of which has an age limit.