Peter Zinovieff, a composer and inventor whose pioneering synthesizers shaped albums by Pink Floyd, David Bowie, Roxy Music and Kraftwerk, died on June 23 in Cambridge, England. He was 88.

His death was announced on Twitter by his daughter Sofka Zinovieff, who said he had been hospitalized after a fall.

Mr. Zinovieff oversaw the design of the first commercially produced British synthesizers. In 1969, his company, EMS (Electronic Music Studios), introduced the VCS3 (for “voltage controlled studio”), one of the earliest and most affordable portable synthesizers. Instruments from EMS soon became a staple of 1970s progressive-rock, particularly from Britain and Germany. The company’s slogan was “Think of a sound — now make it.”

Peter Zinovieff was born on Jan. 26, 1933, in London, the son of émigré Russian aristocrats: a princess, Sofka Dolgorouky, and Leo Zinovieff. His parents divorced in 1937.

Peter’s grandmother started teaching him piano when he was in primary school. He attended Oxford University, where he played in experimental music groups while earning a Ph.D. in geology. He also dabbled in electronics.

“I had this facility of putting pieces of wire together to make something that either received or made sounds,” he told Red Bull Music Academy in 2015.

He married Victoria Ross, then 17, who came from a wealthy family. She and her parents were unhappy with the extensive travel that a geologist’s career required. After Mr. Zinovieff worked briefly for the Air Ministry in London as a mathematician, he turned to making electronic music full time, supported by his wife.

He bought tape recorders and microphones and found high-quality oscillators, filters and signal analyzers at military-surplus stores. Daphne Oram, the electronic-music composer who was a co-founder of the BBC Radiophonic Workshop, taught him techniques of making music by splicing together bits of sound recorded on magnetic tape in the era of musique concrète.

But Mr. Zinovieff decided that cutting tape was tedious. He built a primitive sequencer — a device to trigger a set of notes repeatedly — from telephone-switching hardware, and he began working on electronic sequencers with the electrical engineers Mark Dowson and Dave Cockerell. They realized that early digital computers, which were already used to control factory processes, might also control sound processing.

Mr. Zinovieff’s wife sold her pearl and turquoise wedding tiara for 4,000 British pounds — now about $96,000 — to finance Mr. Zinovieff’s purchase of a PDP-8 computer designed by the Digital Equipment Corporation. Living in Putney, a district of London, Mr. Zinovieff installed it in his garden shed, and he often cited it as the world’s first home computer. He added a second PDP-8; the two units, which he named Sofka and Leo, could control hundreds of oscillators and other sound modules.

The shed was now an electronic-music studio. Mr. Cockerell was an essential partner; he was able to build the devices that Mr. Zinovieff envisioned. Mr. Cockerell “would be able to interpret it into a concrete electronic idea and make the bloody thing — and it worked,” Mr. Zinovieff said in the 2006 documentary “What the Future Sounded Like.”

In 1966, Mr. Zinovieff formed the short-lived Unit Delta Plus with Delia Derbyshire (who created the electronic arrangement of Ron Grainer’s theme for the BBC science fiction institution “Doctor Who”) and Brian Hodgson to make electronic ad jingles and other projects.

On Jan. 15, 1968, Mr. Zinovieff brought his computer to Queen Elizabeth Hall in London for Britain’s first public concert of all-electronic music. His “Partita for Unattended Computer” received some skeptical reviews: The Financial Times recognized a technical achievement but called it “the dreariest kind of neo-Webern, drawn out to inordinate length.” 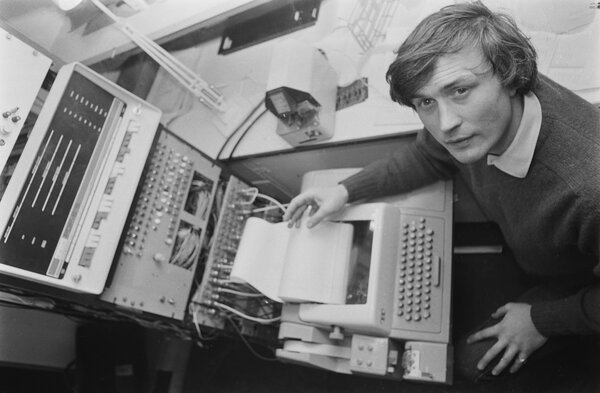 Mr. Zinovieff lent a computer to the 1968 exhibition “Cybernetic Serendipity” at the Institute of Contemporary Arts in London. Visitors could whistle a tune and the computer would analyze and repeat it, then improvise variations.

Continually upgrading the Putney studio was expensive. Mr. Zinovieff offered to donate the studio’s advanced technology to the British government, but he was ignored. To sustain the project, he and Mr. Cockerell decided to spin off a business.

So in 1969, Mr. Zinovieff, Mr. Cockerell and Tristram Cary, an electronic composer with his own studio, formed EMS. They built a rudimentary synthesizer the size of a shoe box for the Australian composer Don Banks that they later referred to as the VCS1.

In November, they unveiled the more elaborate VCS3, also known as the Putney. It used specifications from Mr. Zinovieff, a case and controls designed by Mr. Cary and circuitry designed by Mr. Cockerell (who drew on Robert Moog’s filter design research). It was priced at 330 pounds, about $7,700 now.

Yet the VCS3 was smaller and cheaper than other early synthesizers; the Minimoog didn’t arrive until 1970 and was more expensive. The original VCS3 had no keyboard and was best suited to generating abstract sounds, but EMS soon made a touch-sensitive keyboard module available. The VCS3 also had an input so it could process external sounds.

Musicians embraced the VCS3 along with other EMS instruments.

EMS synthesizers are prominent in songs like Pink Floyd’s “On the Run,” Roxy Music’s “Virginia Plain” and Kraftwerk’s “Autobahn,” and the Who used a VCS3 to process the sound of an electric organ on “Won’t Get Fooled Again.” King Crimson, Todd Rundgren, Led Zeppelin, Tangerine Dream, Aphex Twin and others also used EMS synthesizers.

“I hated anything to do with the commercial side,” Mr. Zinovieff told Sound on Sound magazine in 2016. He was more interested in contemporary classical uses of electronic sound. In the 1970s, he composed extensively, but much of his own music vanished because he would tape over ideas that he expected to improve.

He also collaborated with contemporary composers, including Harrison Birtwistle and Hans Werner Henze. “I didn’t want to have a commercial studio,” he said in 2010. “I wanted an experimental studio, where good composers could work and not pay.” Mr. Zinovieff and Mr. Birtwistle climbed to the top of Big Ben to record the clock mechanisms and gong sounds they incorporated in a quadraphonic 1971 piece, “Chronometer.”

Like other groundbreaking synthesizer companies, EMS had financial troubles. It filed for bankruptcy in 1979 after branching into additional products, including a video synthesizer, a guitar synthesizer and a vocoder.

Mr. Zinovieff handed over his full studio — including advanced prototypes of an interactive video terminal and a 10-octave pressure-sensitive keyboard — to the National Theater, in London, which belatedly found that it couldn’t raise funds to maintain it. The equipment was dismantled and stored for years in a basement, and it was eventually ruined in a flood.

Mr. Zinovieff largely stopped composing for decades, but he wasn’t entirely forgotten. He worked for years on the intricate libretto for Mr. Birtwistle’s 1986 opera “The Mask of Orpheus,” which included a language Mr. Zinovieff constructed using the syllables in “Orpheus” and “Eurydice.”

In 2010, Mr. Zinovieff was commissioned to write music for a sculpture in Istanbul with 40 channels of sound. “Electronic Calendar: The EMS Tapes,” a collection of Mr. Zinovieff’s work and collaborations from 1965 to 1979 at Electronic Music Studios, was released in 2015.

Mr. Zinovieff learned new software, on computers that were exponentially more powerful than his 1970s equipment, and returned to composing throughout the 2010s, including pieces for cello and computer, for violin and computer and for computer and the spoken word. In 2020, during the pandemic, he collaborated with a granddaughter, Anna Papadimitriou, the singer in the band Hawxx, on a death-haunted piece called “Red Painted Ambulance.”

A former employee, Robin Wood, revived EMS in 1997, reproducing the vintage equipment designs. An iPad app emulating the VCS3 was released in 2014.

Even in the 21st century, Mr. Zinovieff sought better music technology. In 2016, he told Sound on Sound that he felt limited by unresponsive interfaces — keyboards, touchpads, linear computer displays — and by playback through stationary, directional loudspeakers. He longed, he said, for “three-dimensional sound in the air around us.”