One of Turkey’s Hottest Rock Bands Has an Unlikely Source

Late one night in 2016, Jasper Verhulst was sitting on his balcony in Amsterdam, pondering his next career move.

The Dutch bass player had been playing in an indie band, he recalled in a recent video interview, but its singer had decided to stop touring, and Verhulst needed a new project.

That night, he put on a playlist of his favorite Turkish rock songs — tracks written in the 1970s that combined traditional Turkish melodies and instruments with psychedelic rock, to make a funky sound all their own. Suddenly, he was struck by thought: “This is what I want to do.”

Turkish rock songs like these would sound great at a music festival, he thought, yet he’d never heard that before. So he decided to fill the gap. He just had a few problems to overcome first: He didn’t speak Turkish, and he didn’t play any Turkish instruments.

Soon, he was posting “Wanted” advertisements in Turkish grocery stores and restaurants around Amsterdam, as well as on Facebook, looking for musicians to play cover versions of the most famous tracks from the 1970s. “I really didn’t know if there would be any Turkish people who would like the idea,” Verhulst said. “But I thought, ‘I would love to do this, so let’s just try.’”

Five years later, the six-piece band Verhulst formed, Altin Gun (which means “Golden Day” in Turkish), is arguably the world’s most prominent Turkish-language rock band. Two of its members, Merve Dasdemir and Erdinc Ecevit, both of Turkish descent, joined thanks to his Facebook post. The other members are Dutch, or British, and the band rehearses in Amsterdam.

In 2019, the band became the first Turkish-language act to be nominated for a Grammy, leading Hurriyet, a Turkish daily newspaper, to call them “our pride on the red carpet.” They regularly play sold-out shows in Istanbul, and they have also become a sight on festival posters across Europe and the United States. They were scheduled to play the Coachella and Bonnaroo festivals last year, before the coronavirus pandemic stopped both events.

The band’s new album, “Yol,” released last week, is already being lauded by fans in and outside Turkey. “These individuals do a better job than our minister of tourism and foreign affairs to strengthen our foreign relations,” one Turkish fan wrote on YouTube beneath one of Altin Gun’s recent videos. Another fan simply wrote the Turkish word for “Beautiful!” and followed it with Turkish flag emoji.

Verhulst said he found the group’s growing popularity, especially in Turkey and its diaspora, overwhelming at times. “It’s kind of weird when something’s bigger than you feel,” he said. Dasdemir, in a video interview, agreed it could be odd. Playing sold-out shows in Istanbul “feels like conquering my own country,” she said.

Turkish psychedelic rock is undergoing a resurgence, said Cem Kayiran, the music editor of Bant Mag, a Turkish youth magazine, in a telephone interview. The style emerged in the 1970s, when some of Turkey’s biggest pop stars took old folk songs and updated them with modern instruments, he said.

In the early 2000s, several record labels, notably Finders Keepers in Britain, began reissuing records from that time, bringing the music to a Western audience, he added. Now, acts like Altin Gun and Gaye su Akyol, a Turkish rock star, were revitalizing the genre all over again. “It’s really hype right now,” he said.

Altin Gun were so good at what they did, Kayiran added, that some younger Turkish people didn’t even seem to realize the band was covering old folk tunes. “I’ve got Turkish friends in the United States who’ve sent me YouTube links of their songs going, ‘You have to hear this band, they’re really cool,’” he said. “I have to send them links to the originals back,” he added.

Dasdemir, who was born in Turkey but moved to the Netherlands as a young adult, said she didn’t think twice about joining Altin Gun after seeing Verhulst’s advertisement. “I was tagged in his Facebook post and just couldn’t believe my eyes that this Dutch guy wanted to make music from my culture,” she said. “I thought it was so cool.”

A handful of people have accused the group of cultural appropriation, she said, but this didn’t make sense to her. “I’m 100 percent Turkish,” she said. “If I’m not going to cover my own culture’s music, who’s going to do it?” she added.

Fans agreed it didn’t matter where the band’s members were born. “You literally could dance to their music at a Turkish wedding, in rural Turkey,” said Ozgur Muslu, a fan living in Massachusetts, in a Facebook message.

“I ultimately look at the final product, and I am seeing a rainbow of influences,” Muslu said, including electronic elements that are far from typical Turkish rock music. 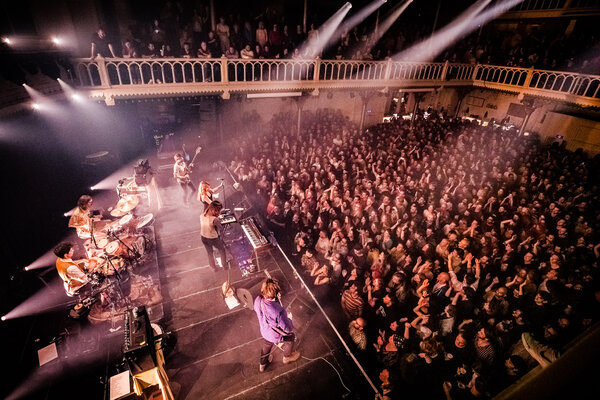 Dasdemir and Ecevit, the band’s Turkish members, often choose which songs to cover. But Verhulst said he suggested tunes, too, despite having no idea what the lyrics were about, picking tracks from his own record collection, or YouTube. This doesn’t always go according to plan. “Sometimes Merve and Erdinc are like, ‘We can’t sing that, it’s a wedding song!’ or ‘No, this is too religious,’ or ‘These lyrics are really lame,’” he said.

He always accepted their decision, he said. “I’m the bass player. It’s not like I’m going to sing Turkish songs to Turkish people,” he added.

Gaye su Akyol, one of Turkey’s most famous rock musicians, said she would like to see the band branch out from covers and release its own material. “Musical genres need new compositions to develop and expand,” she said in a telephone interview. Altin Gun were great musicians, “faithful to the soul of Turkish psychedelic music,” she said, but she was sure they could push the genre into new places if they wanted to.

Dasdemir said that wasn’t the plan for now. For a start, she’d find it hard to write an original song in the old Turkish style, she said, as the lyrics were often old-fashioned and highly poetic.

Original music was also just not what Altin Gun was about, Verhulst said. “We’re a folk band,” he said, just like the ones who used to wander Britain, the Netherlands or, indeed, Turkey, bringing old songs to new audiences.

He loved music from all over the world, he added, and Turkish music was “just 5 percent” of his record collection. But for now, he added, it was all he wanted to play. “There’s all these beautiful songs written in Turkey, some of them more than 100 years old, where the composers are totally unknown,” he said. “It’s nice to keep that tradition going.”