Warning: This article contains spoilers for Men in Kilts, Episode 7, “Clans and Tartans.”

In the seventh episode of Men in Kilts, Sam Heughan and Graham McTavish explore the history of the Outlander-inspired families — the Frasers, MacKenzies, and more. This episode is all about “Clans and Tartans,” or fams and kilts. They explore Jamie Fraser’s family clan history, while Graham reminds Sam repeatedly he’s not a real Fraser. Rude, Graham. Rude. But considering that in the last episode Sam tried to off Graham, it’s only fair. 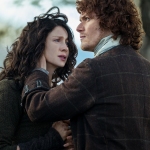 The episode kicks off with Sam and Graham on a chair lift climbing high above Scotland. Sam asks Graham if he’s afraid of heights. Graham is very afraid of heights — as we learned in the last episode when Sam basically dangled him off a rock and laughed the whole time. Graham says, “This show isn’t about Scotland, it’s about you trying to make a fool of me.” Sam laughs. Then Graham laughs because it’s true.

They explain “clan” is Gaelic word that means “kindred.” Historically, a man was head of the clan. In Outlander, Colum MacKenzie was the head of the MacKenzie family. They drop a signature flashback of Colum yelling at his brother Dougal (Graham’s character). Graham excitedly says he’s looking forward to visiting Sween castle, the MacTavish clan’s castle.

Sam says he doesn’t know much about his personal family history, but he knows a lot about his Outlander character Jamie Fraser’s family. The Fraser clan. They then drop an iconic Outlander flashback of Claire and Jamie’s wedding night, when Jamie goes in for a kiss, and Claire (Caitríona Balfe) blocks him with: “Tell me about your family.” Hot, Claire. Hot. Let’s just say Claire explored his family tree in more ways than one that night. Also, Men in Kilts, I see what you’re doing dropping an Easter egg on Easter. Jamie and Claire’s wedding night. Nice. It’s not really an Easter egg but roll with it. 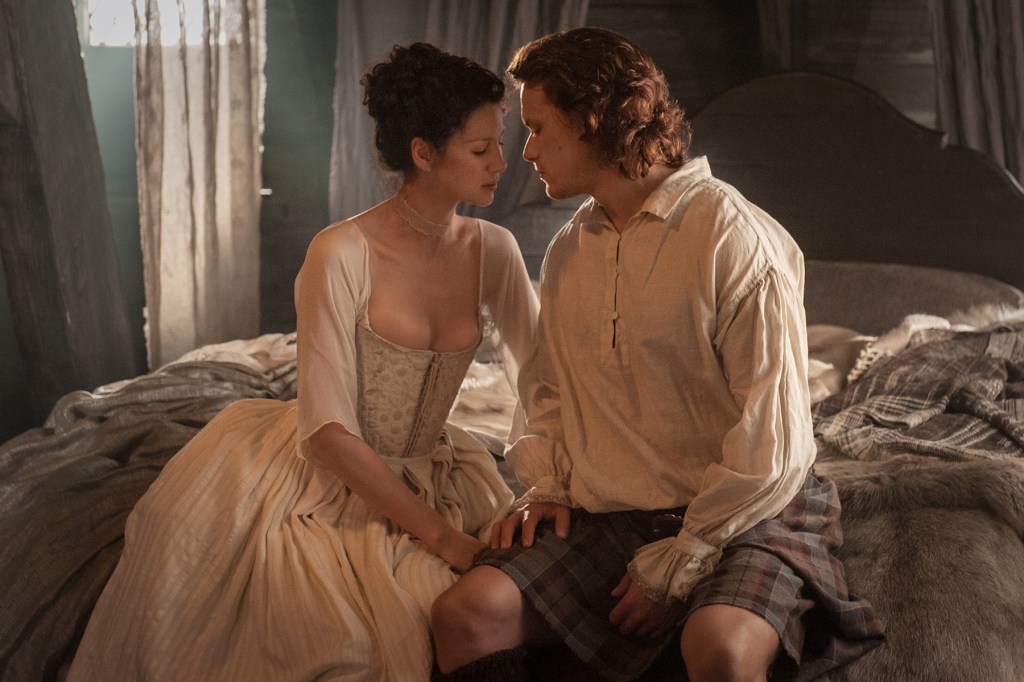 Sam and Graham explain that the clans in Scotland lost power in 1745 as depicted in Outlander. Their first stop is at the Isle of Skye, specifically Trumpan church (no relation), which was the site of a massacre. They meet up with members from two clans — the MacDonalds and the MacLeods, who are notorious enemies. Sam seems excited they may fight. Graham wonders why Sam is the way Sam is. This scene is fun to watch, mainly to see Sam and Graham’s reaction to a story about a woman who sang a lullaby about her husband’s beheading. What a sweet lullaby? 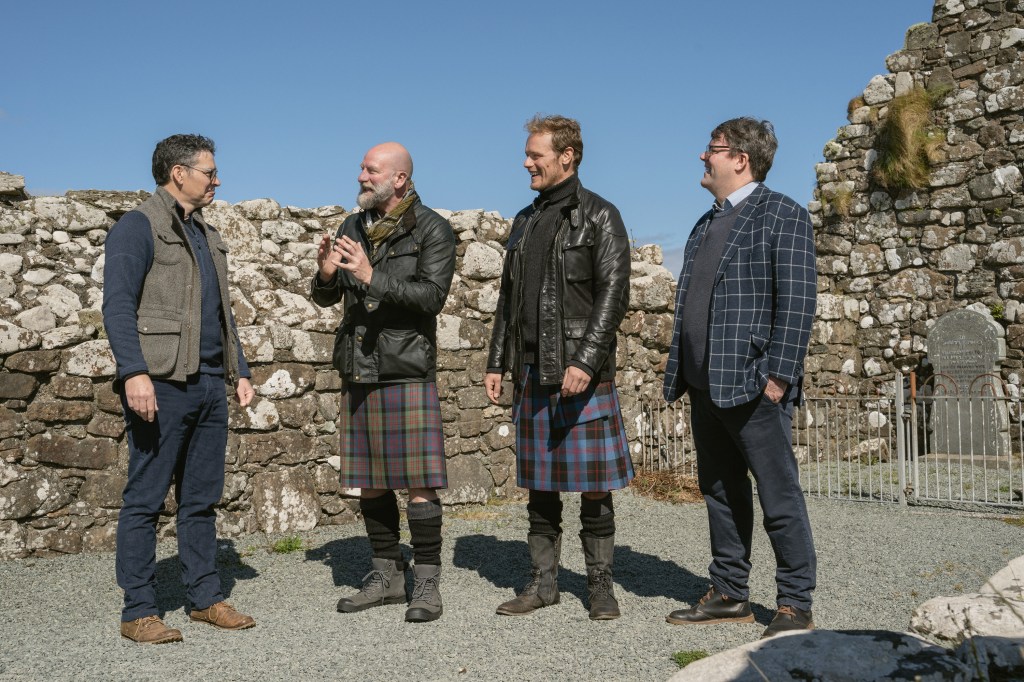 Next up, Sam and Graham are on a tandem bike. Graham’s in front and Sam at the back. Sam loves it. Graham hates it. Actual hate. He’s a curmudgeon on wheels. Sam stops peddling. “Are you actually peddling?” Graham asks. Sam doesn’t answer and instead says he wishes he had a kilt on. Smooth segue, Sam. Graham tells him he’s ridiculous. Ahhh, friends who bike together… I’ve got nothing.

Speaking of kilts, they head to the Prickly Thistle, where they speak to founder Claire Campbell. (Have you noticed everyone they meet is named Claire? Seriously, watch every episode of Men in Kilts, and you will be Claired. You will see Clairely now, the rain has gone. It’s Scotland, the rain’s never gone. Moving on.) This Claire makes authentic tartans and it’s pretty amazing. They drop another good Outlander flashback where Jamie is getting into his kilt from a deleted scene in Outlander season 1. Claire (not Fraser) explains the purpose of woven wools was to protect men from the elements. Each clan has signature colors and a kilt for every occasion — except tandem bike riding, Graham claims. I think Graham’s lying. Sorry, but I do. I’m still on his team from last episode. But this is a tartan lie.

In a behind-the-kilt tour, they see a nice tartan being woven, which is Sam’s. Graham asks if he gets one and no one answers. The next step in the art of kilting is called, “waulking.” Am I the only one picturing Christopher Walken in a kilt? Yes? Cool. Graham points out they covered this process on Outlander via a Season 1 flashback with Claire Fraser watching a group doing the traditional waulking process to weatherproof and tighten the kilts. Sam and Graham meet the Badenoch Waulking Group, who sing while they waulk. The singing was done to pass the time and gossip. Ooh singing gossip, this could work in 2021. “Karen is super annoying, she always replies all to everyone.” I’m singing it, you just can’t hear it.

Two Men in Kilts on a tiny sea plane

After the tartaning, they visit the grave of cattle blackmailer Rob Roy MacGregor. Where he’s buried is at the center of the MacGregor and MacLaren feud. Sam thinks it will be fun to surprise members of each clan at Roy’s grave. Thankfully, a fight doesn’t break out, due to the presence of whisky. They toast to “whoever lies beneath these stones,” and the MacGregor clan member mutters, “Rob Roy MacGregor.” Shade.

Sam and Graham then head to a sea plane. They look like Top Gun in Kilts as they walk down the tarmac in slow motion in kilts and leather jackets. It’s a super tiny plane. Apparently, Graham’s fear of heights does not apply to sea planes. He’s too excited about seeing the castle of his forefathers.

They land their tiny plane on the water and seem mildly nervous. Next up is good ol’ Castle MacTavish, which Graham claims is the oldest stone-built castle. It’s the first time he’s ever visited. They look at it from afar, and Sam mocks it. They don’t even let Graham get out of the plane and walk around! Sam’s like, “Hi Graham fam castle. Bye.” Graham objects, “Can’t we walk around?” “Nope, no time,” Sam replies as they take off. Sam Heughan is a hilariously bad tour guide. 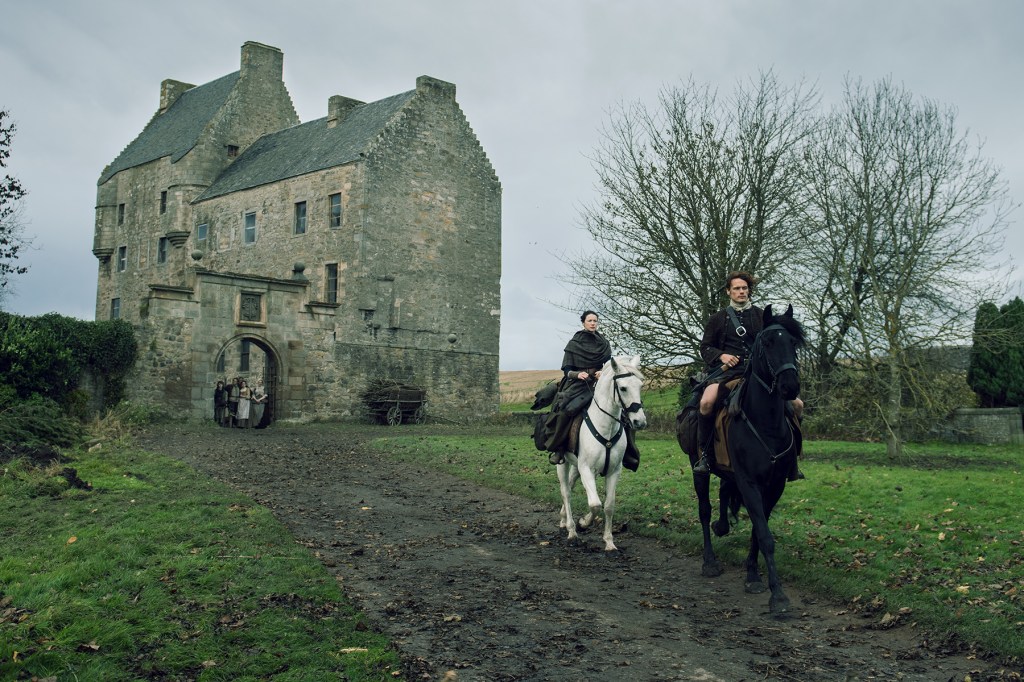 “I’ve scheduled a visit to the home of the Frasers!” Sam excitedly tells Graham, who replies, “Oh yes, the Frasers, the fictional character you play.” Sam says, “The Frasers were a very real clan.” Their sea plane brings them to the home of the Frasers. Sadly, not Jamie and Claire’s Lallybroch. But a castle that belonged to the Fraser family. “We have an impressive castle in Beauly,” Sam explains. “THEY have an impressive castle, you’re a fictional Fraser!” Graham reminds him again.

They arrive at Beaufort Castle and meet Sarah Fraser from Clan Fraser. Sam says the Fraser family was a French family, and that’s where the name came from, the French word for strawberry, “fraise.” Wait a minute, is Sarah Fraser Jamie’s distant cousin? (Somewhere Graham McTavish is yelling, “Jamie Fraser is not real!”)

Sarah explains the Fraser clan’s main rival was the MacKenzies. Also the inspiration for Graham’s character, Dougal MacKenzie. Sarah goes into their rivalry and it ends with Graham calling someone a parasite. And then Sam gets mad thinking he’s calling the Frasers a parasite. Graham says, “Your fictional self is getting very upset. You aren’t actually a Fraser.” But Sarah comes through with an offer for Sam. He can become a Fraser if he swears eternal allegiance. And for a small fee. Sam’s Venmo-ing her now. (As for his allegiance to Frasers, see Outlander. Filming seven years’ worth of Jamie Fraser must get him a discount?). Sarah: “You can be a real Fraser for $9.99.” Sam: “Deal.” 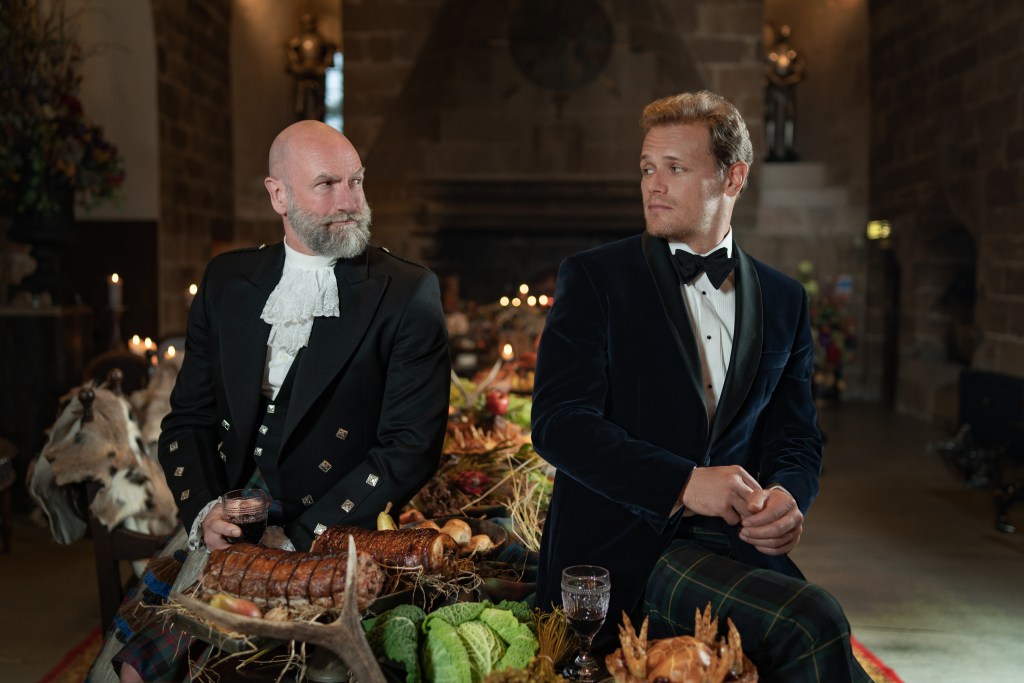 Game of Thrones and Outlander connection

To celebrate their clans by sea and land tour coming to a close, they have a celebratory dinner at a giant table with fish heads. Graham tells Sam a story about two clans that had dinner and ended rather bloodily. It was the inspiration for a Game of Thrones episode. Sam replies, “Game of what? Never heard of it.” Fun fact: Sam Heughan auditioned for Game of Thrones numerous times. Better fact: He didn’t get cast and instead went on to lead a better show, called Outlander. You may have heard of it.

The next episode is the season finale and it’s all been leading up to this, the Battle of Culloden. There are swords, bagpipes, Sam and Graham screaming and running. Sounds fun. Another Droughtlander will begin after the finale. But the good news is, there are a few Outlander updates. Diana Gabaldon tweeted she finished the ninth book in the Outlander book series. So 2021 might not be so bad after all. Season 6 is being filmed and a new Outlander book is almost here? Yes, please, and thank you. Sam and co-star Caitríona Balfe dropped selfies recently to prove they’re back on set working away.

Our mission at SheKnows is to empower and inspire women, and we only feature products we think you’ll love as much as we do. Please note that if you purchase something by clicking on a link within this story, we may receive a small commission of the sale.

Before you go, check out the all-time best ‘Outlander’ episodes you need to watch (or re-watch).