Mary Ahern, Who Produced Early TV and Then Preserved It, Dies at 98

Mary V. Ahern, who was an important behind-the-scenes figure on the cultural magazine show “Omnibus” and other early television programs, then helped preserve those and similar touchstones of television history as the Paley Center for Media’s first curator, died on May 1 at a care center in Peabody, Mass. She was 98.

Her niece Joan Curry said the cause was cancer.

Ms. Ahern spent much of her career working with Robert Saudek, an Emmy Award-winning producer whom The New York Times once described as “alchemist in chief of what is often recalled as the golden age of television.” Mr. Saudek, who died in 1997, created “Omnibus” in 1952, when television was new. Ms. Ahern was his valued right hand, as she had been earlier when he worked in radio.

“Omnibus” was hosted by Alistair Cooke, who at the time was known primarily from radio, and it cast an incredibly wide net as it explored what could be done on the new medium and whether anyone would watch it.

Orson Welles, Yul Brynner, Ethel Barrymore, James Dean and other famous or soon-to-be-famous actors appeared in staged dramas. William Inge and other playwrights unveiled new works. Gene Kelly tap-danced with the boxer Sugar Ray Robinson. There was a segment that explained what an X-ray was. One particularly inspired episode put children’s toys to the adult test: Professional musicians jammed on kiddie instruments, and a professional chef tried to make a dinner for six using a tiny toy oven.

At the time, television job titles and duties were less rigidly defined than they are now, but Ms. Ahern was essentially a producer on some episodes, a script writer on others, lead researcher or editor or supervisor on still others, and sometimes all those at once.

She was pivotal in bringing Leonard Bernstein to the program, meeting over lunch with him and Paul Feigay, another “Omnibus” producer, who had worked with Mr. Bernstein on the 1944 musical “On the Town.” She and Mr. Feigay showed Mr. Bernstein some Beethoven sketchbooks that had come their way that were filled with the composer’s notes from his writing of the Fifth Symphony, including an assortment of rejected ideas.

“Lenny had never seen these sketches at all,” Ms. Ahern said in an oral history recorded by Ron Simon in 2017 for the Television Academy Foundation. As they were leaving the lunch, she said, he was struck with an idea.

“I remember coming out on Fifth Avenue with Lenny,” she recounted, “and he said, ‘You know what I could do?’ — because he knew the score, of course, backwards; he’d conducted the Beethoven Fifth many times. He said, ‘I could look at where he would have put those sketches and why he rejected them.’ And that was the first program we did on Bernstein.”

That episode, broadcast in November 1954, is regarded as a classic early example of television that both entertains and enlightens. Mr. Bernstein, Howard Taubman wrote in The Times, “made vividly clear how Beethoven fought his way to the right phrase.”

The episode’s success led to a series of appearances on the program by Mr. Bernstein, on subjects including opera, Bach and the art of conducting. A Bernstein episode on musical comedy in 1956 included among the cast an unknown singer named Carol Burnett, making one of her first television appearances.

But Mr. Bernstein’s television talks weren’t improvised; one of Ms. Ahern’s tasks was working over his proposed scripts, which were full of musical terms of art, to make them more friendly to the general viewer.

“He knew so much,” she said. “What he didn’t realize is — and I was the perfect foil for that — that people did not know what he knew.” 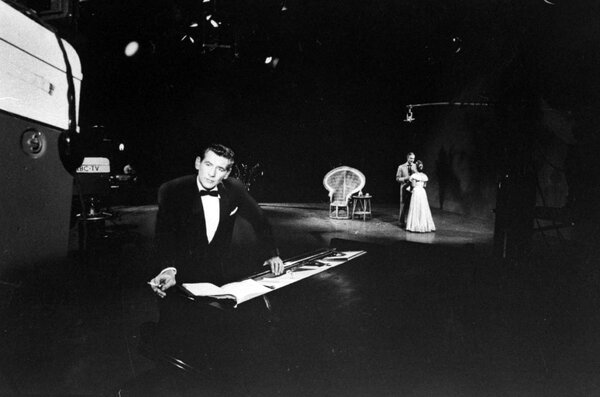 “Omnibus,” which began on CBS, moved to ABC and then NBC before finishing its run in 1961 after more than 150 episodes, most of which — these being TV’s early days — were broadcast live. By then Mr. Saudek had formed his own production company and Ms. Ahern had joined him there, where she continued to be a key figure in numerous productions.

In the mid-1970s William S. Paley, the chairman of CBS, decided to create the Museum of Broadcasting, dedicated to preserving TV and radio history, and brought in Mr. Saudek to be its first president. Ms. Ahern became curator of the new museum, which opened in 1976 and is now the Paley Center for Media.

“That title makes me feel I should have jars with old bones,” she told The Times in 1977, but in fact it made her a foundational figure in documenting and preserving important programs, old TV commercials and assorted broadcasting oddities. Later, from 1986 to 1989, she did similar work as an acquisitions specialist at the Library of Congress.

Mary Virginia Ahern was born on Oct. 15, 1922, in Cambridge, Mass. Her father, Thomas, was in real estate and insurance, and her mother, Nora, was a teacher.

Ms. Ahern enrolled at Radcliffe College to study anthropology but switched to literature, graduating in 1942. Then, during World War II, she served for three years in the Army’s Chemical Warfare Service.

“She supervised the inspection of gas masks and was assigned to the procurement of flame throwers and other deadly weapons,” The Times wrote in a 1959 article about her. “One of her associates has noted that this was an incongruous occupation for a gentle, retiring young woman who had majored in American literature at college. But, he added: ‘I’m sure she was good at it. She knows how to get to the essence of any problem.’”

After the war, Ms. Ahern enrolled in a management training course at the Harvard Business School (which was not yet admitting women to its master’s program).

“They had internships, which were novel in those days,” she said in the oral history, “and I had an internship to what was the brand-new American Broadcasting Company, in the public affairs department.”

The head of that department was Mr. Saudek.

They worked together on radio documentaries, taking on weighty subjects like the Marshall Plan and urban slums. In the early 1950s, when the Ford Foundation set itself the task of developing TV programs that would inform and enlighten, it hired Mr. Saudek, by then an ABC vice president, as director of what it called the TV-Radio Workshop. He brought along Ms. Ahern, and she helped him start “Omnibus.” Few women were working as producers at the time.

Programs Ms. Ahern worked on after “Omnibus” included the mid-1960s anthology documentary series “Profiles in Courage,” a Saudek production, for which she wrote and edited scripts. In the 1970s she worked with Mr. Bernstein again as one of the producers of his “Norton Lectures” series for PBS. In the 1980s, Ms. Ahern was credited with greatly expanding the Library of Congress’s radio and TV holdings, particularly by acquiring countless programs from the NBC archives.

In addition to Ms. Curry, Ms. Ahern is survived by two other nieces, Mary H. Ahern and Sharon A. Ahern.

Ms. Ahern’s long association with Mr. Bernstein included traveling to the Soviet Union in 1959 to oversee the filming of “Leonard Bernstein and the New York Philharmonic in Moscow,” which Mr. Saudek’s company was making for CBS. The Times wrote about her behind-the-scenes role, not only for the Bernstein special, but also for many other programs, saying she “has investigated and become proficient in such diverse subjects as jet aircraft, burlesque and sea horses.”

Among the problems she had to solve in Moscow, the article said, was how to translate the title of Aaron Copland’s “Billy the Kid,” which was on the program, into Russian. She consulted a teacher in Kiev.

“The closest equivalent the adviser could offer,” the newspaper said, “was ‘Fellow Billy.’”