For more than a half-century, nearly every prominent singer to perform at the Metropolitan Opera could expect to be approached backstage afterward by a wispy woman in thick glasses, who held piles of memorabilia to be autographed while she praised their performance in a raspy Brooklyn accent.

This was Lois Kirschenbaum, one of New York’s biggest and longest-standing opera buffs and a nightly staple at the opera since the late 1950s, before Lincoln Center was built, when the Met was located in Midtown.

Few operatic performances took place at the Met without being observed through Ms. Kirschenbaum’s large binoculars (she was legally blind from birth), usually from a seat in the uppermost balcony secured for little or no money by canvassing operagoers at the entrance just before the opening curtain.

And few prominent singers went home without signing numerous items for Ms. Kirschenbaum, whose constant desire to get backstage helped her befriend some of the world’s most famous opera singers, from Beverly Sills to Plácido Domingo.

Ms. Kirschenbaum died on March 27 at a hospital in Manhattan after suffering from pneumonia and renal failure, her longtime friend Sally Jo Sandelin said. She was 88.

Such was Ms. Kirschenbaum’s reputation at the Met, as well as at New York City Opera, that singers half-joked that they had truly arrived on the New York opera scene only after being approached by Ms. Kirschenbaum after a performance.

“It was like getting a special type of approval,” the mezzo-soprano Frederica von Stade said. “I never met anyone who didn’t welcome her backstage and want to hang out with her.”

“We’d always look out for her and bring her in early if we could,” Ms. von Stade added, “because everyone loved her and she’d have a hundred things to sign.”

The bass singer Samuel Ramey said he was first approached by Ms. Kirschenbaum in his dressing room immediately after his first major role, as Don Basilio in “The Barber of Seville” with City Opera in late 1973.

“I was told, ‘You’ve made it now — Lois has asked you for your autograph,’” he recalled, adding that Ms. Kirschenbaum became a constant presence backstage after his performances over the years and the two became good friends.

“She was something else — she always got on the backstage list,” he said.

Ms. Kirschenbaum, a wisecracking native of Flatbush, defied the stereotype of a highfalutin opera aficionado. She worked as a switchboard operator until retiring in 2004 and lived nearly her entire adult life in a rent-controlled apartment in the East Village, from which she would travel by subway and city bus to Lincoln Center while lugging a huge handbag full of photos, programs and recordings to be signed. 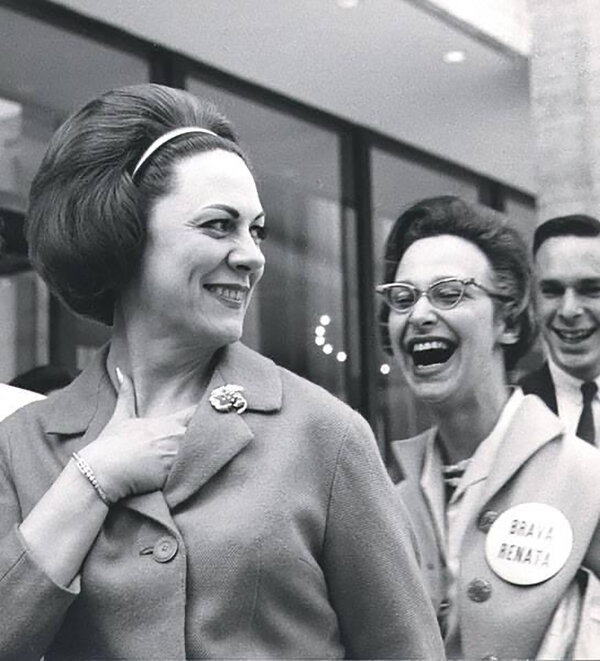 If she was unable to score a free or cheap ticket just before the performance, she would often slip in with the help of a friendly staffer.

“Everyone knew her, from the workers who cleaned the bathrooms to ticket takers to the administration and of course the singers,” said another longtime friend, Carl Halperin. “All you had to say was ‘Lois’ and everybody knew who you meant.”

Ms. Kirschenbaum was the grande dame of a group of hard-core fans who would flock to the backstage door for autographs and chats.

With the help of her huge handbag, she would quickly find her way to the front of the line and approach singers with complimentary and detailed critiques of their performances — from that night, or from years earlier.

“She could tell you anything going on in your performances on any given night — this or that particular phrase and what it meant,” the soprano Aprile Millo recalled. “For a singer, it gave you the feeling that you were being heard.”

“She was so much part of the opera lore of New York, like the aficionados at La Scala,” the famous opera house in Milan, Ms. Millo said. Ms. Kirschenbaum’s request for an autograph, she added, meant “you got the blessing.”

Working the switchboard allowed Ms. Kirschenbaum to call singers and opera insiders for updates on news like cast changes or show cancellations, information she would then relay to fellow opera buffs.

And before the Met began putting out detailed schedules months in advance, Ms. Kirschenbaum became known for the homemade lists she compiled of upcoming performances and featured singers.

She would distribute copies to fellow buffs during intermission, while enjoying the coffee and sandwiches she routinely smuggled in to avoid the expense of buying food at Met prices.

“People would say that Lois’s list was more precise than what you’d get from the press,” Ms. Millo said.

Ms. Kirschenbaum gleaned much of her information while soliciting singers’ autographs.

“She’d ask them, ‘When are you coming back and what are singing next year?,’” Mr. Halperin recalled. “And while Luciano Pavarotti was signing something for her, he’d say he’d be singing ‘La Bohème’ and ‘Tosca’ next season. And she’d collect all this.”

Ms. Millo said Ms. Kirschenbaum might have her sign up to 20 pieces of memorabilia at a time. “It was a way to keep you engaged — it was clever of her,” she said.

Lois Kirschenbaum was born in New York City on Nov. 21, 1932, to Abraham and Gertrude Kirschenbaum. Her father was an optometrist.

An only child, she grew up in Flatbush and graduated from Thomas Jefferson High School in Brooklyn. She did not attend college.

She was an avid Brooklyn Dodgers fan, but when the Dodgers departed New York for Los Angeles in 1957, her obsession shifted to opera after she heard a recording by the soprano Renata Tebaldi being played in a record shop.

In her later years, Ms. Kirschenbaum alternated between haunting the margins of the Met for tickets and autographs and being honored as a special guest at fancy galas held by opera organizations.

For her 75th birthday, in 2007, she was feted at a party by singers like Marilyn Horne and Renée Fleming, as well as the Met’s musical director, James Levine — “Jimmy” to Ms. Kirschenbaum — who gave her a ring and an autographed operatic score of “La Bohème.”

In 1980, she won a raffle to see Beverly Sills’s farewell performance gala at City Opera, after having seen every role Ms. Sills sang in New York, except one, for 25 years.

“Beverly saw me after that and said, ‘Lois, it was fixed,’” Ms. Kirschenbaum laughingly told The New York Times in 2012.

In recent years, Ms. Kirschenbaum had begun using a wheelchair and went to the Met only sporadically. She continued to listen to opera (and to Yankees games) on the radio.

Friends said she never married and never spoke of any surviving family members.

It was unclear what would become of the trove of autographs, programs and photographs left behind in Ms. Kirschenbaum’s apartment.

“There was no one more devoted to opera and the artists she loved than Lois,” Ms. Fleming said. “She was a beloved member of the Metropolitan Opera family, like a favorite aunt. I will miss knowing she is watching from the balcony, and seeing her afterward at the stage door.”