Weeks after accusations of sexual abuse and assault against the rapper T.I. and his wife, Tameka Harris, started circulating on social media, a lawyer has approached law enforcement authorities in two states seeking criminal inquiries, on behalf of 11 people who said they were victimized by the couple or members of their entourage.

Four women have accused the celebrity pair of drugging and sexually assaulting them, including two instances of rape that were said to have occurred in Georgia and California, according to the letters sent on Feb. 19 by the lawyer, Tyrone A. Blackburn, to state and federal prosecutors in both states. Similar letters were sent to the attorneys general in those states.

Mr. Blackburn, a New York-based lawyer, said that the “eerily similar” experiences spanned more than a decade, beginning in 2005; the most recent allegation of sexual abuse occurred in 2017 or 2018, he said. None of the women involved know one another, but described “sexual abuse, forced ingestion of illegal narcotics, kidnapping, terroristic threats and false imprisonment” at the behest of T.I., Ms. Harris and their associates or employees, Mr. Blackburn wrote. His letters also included instances of nonsexual intimidation, assault and harassment.

A lawyer for T.I. and Ms. Harris said that the couple “deny in the strongest possible terms these baseless and unjustified allegations.”

“We fully expect that if these claims are thoroughly and fairly investigated, no charges will be forthcoming,” the lawyer, Steve Sadow, said in a statement on Friday. “These allegations are nothing more than the continuation of a sordid shakedown campaign that began on social media and now attempts to manipulate the press and misuse the justice system.”

Mr. Blackburn’s letters called on the officials to investigate the behavior of T.I., an Atlanta superstar born Clifford J. Harris Jr., and Ms. Harris, also known as Tiny, a member of the R&B group Xscape, in order “to tackle and end the stream of depravity being committed.” Most of his clients were referred to anonymously in the letters, Mr. Blackburn wrote, because they were “in fear for their lives and safety,” citing T.I.’s reputation as a powerful man who has been convicted in the past of federal weapons charges.

However, the lawyer added: “My clients and their witnesses are prepared to speak with investigators and prosecutors from your office.”

Several of the women are interested in pursuing criminal cases against T.I. and Ms. Harris, Mr. Blackburn said in an interview, but they are running up against the statutes of limitation in some instances.

Mr. Blackburn said he sent letters seeking criminal investigations to the offices of the U.S. Attorneys for the Northern District of Georgia and the Central District of California, the Los Angeles County District Attorney and the state attorneys general of California and Georgia; he said that he had received notifications that they had been delivered. The Georgia attorney general’s office did not immediately respond to a request for comment. The other law enforcement officials either declined to comment, or said that they could not confirm receipt of the letters.

A military veteran, a former friend-turned-assistant, an exotic dancer and a teenage intern at T.I.’s studio and record label, Grand Hustle, were among the accusers, the lawyer’s letters said.

The New York Times has spoken with five people who, the letters said, were drugged, raped or sexually assaulted by the Harrises or those in their orbit, along with multiple individuals, including friends or family members, who said they were told of those episodes soon after, often within days. In three of the cases, The Times also reviewed messages or photos that supported their timeline of events.

In interviews, the women portrayed the rapper and his wife as aggressors who deployed drugs, alcohol, money and their celebrity status to prey on and entrap women for sexual abuse, and then threatened violence against anyone who might speak out.

The veteran, who served five years in the Air Force, said she met the couple in Los Angeles in 2005.

She and a friend had been whisked into the V.I.P. section of a club where the pair, not yet married, were holding court, the military veteran recalled in an interview. Ms. Harris soon offered the women a taste of her drink, and they tried it, she said. The veteran had also ordered one drink from the V.I.P. bar, she said — an amaretto sour, her standard cocktail and the only other thing she’d knowingly consumed that night.

Within hours, the two friends were sick — woozy and vomiting, they both said in separate interviews. The military veteran, who spoke on the condition of anonymity to protect her family, came to believe that she had been drugged, she said.

Once she became incapacitated, she said T.I. and Ms. Harris then raped her in a hotel room. The veteran’s friend said in a separate interview that she had observed the woman leave the club with T.I. and Ms. Harris, and recalled hearing details of the encounter the next morning as they drove home, in shock. For the veteran, who was 23 at the time, it was a life-altering trauma, she said. 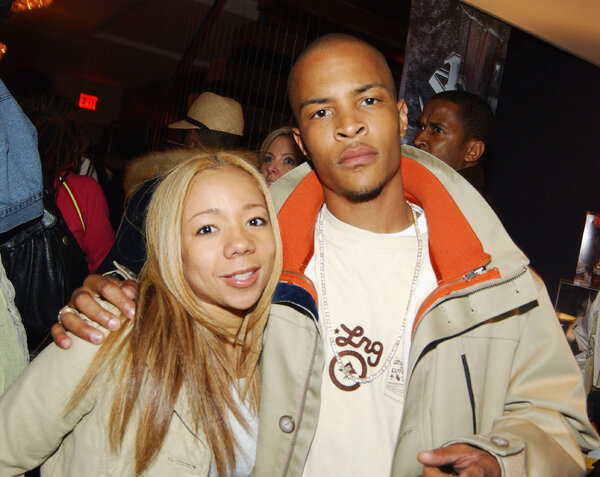 As a regional street rapper-turned-pop star, actor and community leader, T.I., 40, has enjoyed one of the more dramatic narrative arcs in hip-hop history, reinventing himself as a civil rights activist and elder statesman in music after repeated arrests involving drugs and firearms early in his life and career.

His public rehabilitation following a 2009 federal prison sentence for felony gun charges and a subsequent drug arrest was cultivated over the past decade in part through reality shows that focused on his parenting and blended family of seven children, three of whom he had with Ms. Harris, 45. Earlier this month, in light of the allegations, MTV Entertainment postponed production on the VH1 show “T.I. & Tiny: Friends & Family Hustle,” saying it would use the time to gather more information.

Although most of the incidents predated the rapper’s public reinvention, the accusations of drugging, rape and violence have threatened to undermine the professional makeover that has framed T.I. as an upstanding family man and activist from a hardened former criminal. In May, after the police killing of George Floyd and amid the protests that followed in Atlanta, T.I. appeared alongside the city’s mayor, Keisha Lance Bottoms, at a news conference, calling for peace in the place where he was born and raised.

“Our culture runs this city,” T.I. later told CNN, as he campaigned for Democrats in two Senate runoff races there.

The Atlanta mayor’s office did not respond to requests for comment.

The women interviewed by The Times said they initially felt more at ease because they were being showered with attention by what seemed like a committed couple. Ms. Harris, whose nickname, Tiny, comes from her petite stature, served as a friendly figure, they said, especially compared with the more aloof T.I., whose career was on the ascent at the time. The women said that they had not suspected Ms. Harris, a longtime Atlanta presence who co-wrote the TLC hit “No Scrubs,” of being predatory.

Mr. Blackburn’s letters to law enforcement officials also included the account of an Atlanta-based woman who became friends with Ms. Harris when they were teenagers and who went on to work for the couple around 2005, traveling and partying with them.

“On several occasions T.I. forced her to take multiple ecstasy pills” and “the duo forced her to engage in sexual acts with different women against her will,” Mr. Blackburn wrote. “She has personally witnessed women complaining of being kidnapped and held against their will for days at a time.”

In an interview with The Times, the woman said that she never approached the authorities because she was scared of what would happen to her and her family.

For the military veteran, the night took a turn when T.I. and Ms. Harris invited her and a few others to join them when they left the club, she said. Believing they were going to continue the party elsewhere, she recalled going along willingly.

Instead they went to a hotel room where the other guests were quickly asked to leave, according to the lawyer’s letter, and the woman began to suffer the effects of whatever she’d ingested — though she’d consumed less than two drinks, the letter said. Her friend, from whom she’d been separated, never made it to the room; she was throwing up in the lobby restroom, she said in an interview.

According to the letter, Ms. Harris suggested that the military veteran “freshen up,” and brought her to the bathroom, where the woman, intoxicated and overwhelmed, allowed Ms. Harris to undress and bathe her and T.I.

By the time they got her back to the bed, all three people were naked, and the veteran began vomiting, the letter said. T.I. then “attempted to put his foot into her vagina.” She told him no, the letter said. The woman recalled T.I. laughing at her for throwing up and him leaving to retrieve condoms.

“The next thing she remembers,” the letter continued, “was waking up naked on the couch, with a towel thrown over her, with a very sore vagina.” A security guard was banging on the door, telling her to leave, she recalled.

The woman fled. When her friend picked her up, she recounted the rest of her night, they said in separate interviews. At home, the woman made a beeline for the bath, scrubbing her body with soap and Tide with bleach, she said. She was too embarrassed to go to a doctor, she said, but later self-treated for an infection.

Another longtime friend who spoke to the veteran within days of the event confirmed in an interview that she had described the hotel experience as a non-consensual act in which she had been drugged, and never wavered from that when they discussed it in later years. The incident left the woman, who had been working at an aeronautics firm in her first job out of the military, despondent, she said.

The allegations of sexual abuse against T.I. and Ms. Harris first surfaced via the Instagram account of Sabrina Peterson, an Atlanta entrepreneur who was a longtime friend of the couple, but who said last month that T.I. once held a gun to her head and threatened to kill her in 2009. The couple denied Ms. Peterson’s accounts on their own social media, and through a representative.

Mr. Blackburn said that after Ms. Peterson posted her story publicly, she was soon inundated with stories from women who had encountered T.I. and Ms. Harris and felt exploited or endangered. The lawyer said none of the women included in his letter were among those whose accounts were posted on social media.