Late Night Returns in Time for Another Perfect Trump Call

The late-night hosts returned from holiday break on Monday, and the leading topic was the recording of President Trump’s call with Georgia’s secretary of state, Brad Raffensperger, in which the president pressed the official to “find” enough votes to overturn his loss in the state. The fallout put the hosts in mind of another phone call that landed Mr. Trump in hot water in 2019.

“Now, now, buckle up everybody, because this call is like if Watergate and the Ukraine scandal had a baby that they made on the ‘Access Hollywood’ bus,” Stephen Colbert said. “When you’re a star, they let you do it.”

“He had another perfect call over the weekend.” — JIMMY KIMMEL

“He brought up all kind of crazy things — conspiracy theories he says he’s been hearing on what he calls ‘Trump media.’ It was the kind of call that makes you wonder, is he stupid or drunk? And then you remember he doesn’t drink.” — JIMMY KIMMEL

“Trump claimed, among many other things, that there is no way he could have lost Georgia because he had bigger crowds than Joe Biden. As if it was some kind of dueling monster truck shows.” — JIMMY KIMMEL

“One problem: Rally size does not decide an election. That’s why on the 20th, we won’t be swearing in President BTS.” — STEPHEN COLBERT, referring to the K-pop supergroup

“The president of the United States sounded like an inveterate gambler begging his bookie to float him for one more race. [Imitating Trump] ‘I just need 11,000 bucks. I got a great horse. He’s a sure thing.’” — SETH MEYERS

“Trump asked him to somehow find enough votes to flip Georgia, so that he would win the state by one vote. One vote. Trump was like, ‘Because if we’re going to do this, we can’t make it obvious.’” — JIMMY FALLON

“That’s all he wants. He just wants them to ‘find’ exactly how many votes he needs to win by one. Nothing fishy about that.” — STEPHEN COLBERT

“Trump’s call lasted for an hour, by the way. An hour. It was like one of his calls to ‘Fox & Friends’ except he actually cared what the other person had to say on this one.” — JIMMY FALLON

“What a waste. Trump could have spent that hour not helping roll out the vaccine.” — JIMMY FALLON

“Carl Bernstein, the reporter who broke the Watergate scandal back in the ’70s, said what Trump said on this tape was, quote, ‘far worse than Watergate.’ But I guess Trump figures, ‘I’ve only got two weeks left — what the hell?’” — JIMMY KIMMEL

“It doesn’t mean much to Trump. He thinks Watergate is about toilets not flushing hard enough.” — JIMMY FALLON

“That’s right, The Washington Post published an audio recording of President Trump asking the Georgia secretary of state to find enough votes to overturn his loss in the state. Wow, things have gotten a lot easier for The Post since they broke Watergate — now Deep Throat is just Trump himself.” — SETH MEYERS

“Apparently every January, Trump’s New Year’s resolution is to find a new way to get impeached.” — JIMMY FALLON

“He tried everything. He bragged, he challenged, he threatened. He told the secretary of state he would come to Georgia and eat all their peaches — nothing.” — JIMMY KIMMEL

“He’s like a guy without a silver bullet brainstorming other ways to kill a werewolf. [As Trump] ‘What about two regular bullets? Is that something that might work?’” — SETH MEYERS

“What you heard is definitely the voice of a man who’s been in debt before. He sounds like he’s begging the waiter at a steakhouse to let him skate on the bill.” — SETH MEYERS

“It sounds like he’s trying to get someone to hook him up with a free refill of Dr Pepper, not a presidential election.” — JAMES CORDEN 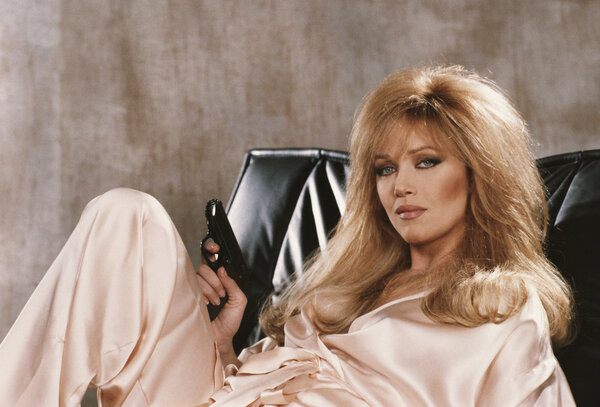 A miscommunication led to erroneous reports that the actress Tanya Roberts had died, her publicist said.