Kim Kardashian often gets accused of being famous for nothing — or that sex tape gets brought up again. Yet the SKIMS founder did something incredibly selfless during the pandemic and didn’t ask for any recognition for her contributions.

On Tuesday, it was revealed that Kim will be feted with the “Giving Tree Award” at the 2022 Baby2Baby Gala because she “used her unrivaled platform during COVID to raise awareness for children lacking essential items like diapers and formula,” Baby2Baby co-CEOs Kelly Sawyer Patricof and Norah Weinstein said in a statement. They added that “she also donated millions of dollars in funds and in-kind products to further our mission to provide necessities to families in need” without looking for approval from any of her peers or fans.

Forbes shared that the 41-year-old entrepreneur “has donated over half a million dollars and 5 million dollars’ worth of in-kind items of clothing and hygiene products for the children and women” since she began working with the organization in 2013. Kim joins an impressive list of Hollywood elites who have also been awarded with the honor, including Jessica Alba, Kerry Washington, Drew Barrymore, Vanessa Bryant, Jennifer Garner, Kate Hudson, and Gwyneth Paltrow.

Kim may be a divisive figure, especially when it comes to setting beauty standards, but we can’t deny that she’s putting her money to work. From prison reform to helping families in need, she’s finding a way to use her power and influence for good.

Before you go, click here to see all of the highest paid women in Hollywood! 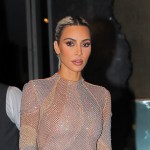