Juneteenth: 7 Events for Celebrating the Holiday in New York

As New York reopens, its cultural rhythms are creeping back in, with museums and music venues filling up and outdoor concerts popping up in parks. The city is emerging just in time for Juneteenth on Saturday.

The holiday — a portmanteau of “June” and “nineteenth” — began on June 19, 1865. More than two and a half years after President Lincoln’s Emancipation Proclamation, union troops arrived in Galveston, Tex., to notify enslaved African Americans there that the Civil War had ended — and that they were free.

On Tuesday, the U.S. Senate passed a bill to recognize Juneteenth, also known as Emancipation Day, as a federal holiday. Opal Lee — the 94-year-old Texan activist known as the “grandmother of Juneteenth” — has no doubt that June 19 will become a national holiday, and soon.

“So, the 4th of July? Slaves weren’t free. You know that, don’t you?” Lee told The Times in 2020. “I suggest that if we’re going to do some celebrating of freedom, that we have our festival, our educational components, our music, from June the 19th — Juneteenth — to the 4th of July. Now that would be celebrating freedom.”

Here’s a selection of events — both in-person and virtual — for New Yorkers to celebrate that freedom this year.

‘Summer of Soul’ in the Park

The hip-hop musician Ahmir “Questlove” Thompson directed the documentary “Summer of Soul (… Or, When the Revolution Could Not Be Televised),” which releases in theaters on July 2. Part music film, part historical record, the film captures the previously untold story of the 1969 Harlem Cultural Festival, which took place in Mount Morris Park (now Marcus Garvey Park). Stars like Stevie Wonder, Nina Simone and Sly and the Family Stone performed in the six-week festival celebrating Black history, culture and fashion. On Saturday at 5 p.m., New Yorkers can see the award-winning film in the park where much of it was filmed. Free tickets are required for entry. 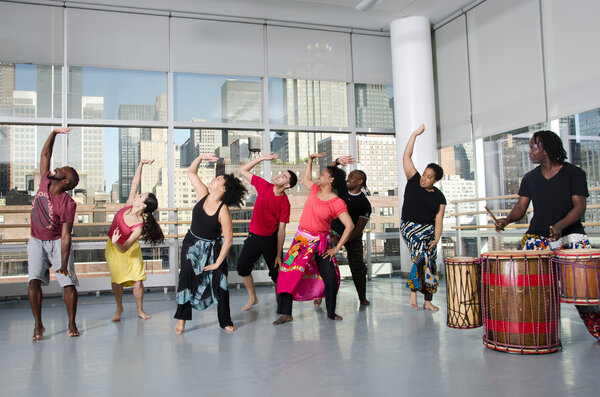 The Alvin Ailey American Dance Theater emerged in 1958, when its founder, Alvin Ailey, recognized the power of dance as a tool for social change. Ailey described African-American cultural heritage as “sometimes sorrowful, sometimes jubilant, but always hopeful,” viewing it as one of America’s richest treasures. On Saturday, 12-1:15 p.m., the choreographer Maguette Camara will host a free, virtual dance class featuring live drumming, teaching the basics of traditional West African dance and rhythms.

A Community Choir at the Shed

It’s not a performance. It’s a service. The composer, director and actor Troy Anthony made sure to clarify the difference for “The Revival: It Is Our Duty,” his commission for the Shed in Manhattan. “Juneteenth is not about Abraham Lincoln freeing the slaves. It’s not about Black people finding out that they were free late,” Anthony said. “It’s about the fact that Black people found a path to liberate themselves.” The gospel musical event, includes a community choir and band, is part of The Shed’s “Open Call” series, “The Revival” starts on Saturday at 8 p.m. Tickets are free online.

From MTV star to hip-hop guru to international ambassador, Kevin Powell has seen it all. And he’ll bring that experience to Brower Park in Brooklyn on Saturday, performing an original poetry suite. The rock-jazz-folk band the Soulfolk Experience composed and arranged music to accompany Powell’s performance at 12 p.m. behind the Brooklyn Children’s Museum. The event, presented by the Brooklyn Conservatory of Music, is in partnership with the Brooklyn Children’s Museum, and part of the Friends of Brower Park’s free Juneteenth celebration. Instrument making and other activities will accompany the music, 11 a.m.-2 p.m. The event is free.

On the hit Netflix show “High on the Hog,” the food writer Stephen Satterfield traces African American cuisine from Benin to the Deep South. The show is based on a book by the same name by food historian Jessica B. Harris, who will appear at the Weeksville Heritage Center in Brooklyn on Saturday. The virtual event, “Meals as Collective Memory,” 12:30-4 p.m., explores Black foodways in New York and beyond. The schedule includes learning to make a delicious family dinner at home and a lesson on food deserts; sessions are free online — just be sure to RSVP.

The Bell House in Brooklyn will host its third annual “Emancipation After Party” on Saturday at 6 p.m. — a stacked deck of music and comedy. Hosted by Chinisha S., a self-proclaimed “certified Prince super-fan, nerd/geek-girl, and cheerful nihilist,” the lineup includes DJ Monday Blue; the sketch-comedy team To Karen, With Love; and the comedians Alex English, Aminah Imani, Dave Lester and Jatty Robinson ($18.65 for tickets). Stick around for the after-after party: Brandon Collins and Gordon Baker-Bone will host a Juneteenth edition of their interactive show, “Black Drunk History,” also at the Bell House ($20 for advance tickets).

Come for the jerk chicken and waffles food truck. Stay for the Black beauty bazaar. “Juneteenth in Queens” was planned by Assemblywoman Alicia Hyndman, who also sponsored the legislation that made Juneteenth a state holiday in New York. The festival, which includes a virtual panel series this week, culminates with an in-person event on Saturday, 10 a.m.-6 p.m., in Roy Wilkins Park in Queens. Start your day with yoga for Black liberation, check out the Black art party and try an African dance master class in the afternoon. Register for the event and activities on Eventbrite.