Much has been made of the royal proportions of Josh O’Connor’s ears: Like those of Prince Charles, whom he plays in “The Crown,” they stick out.

But ears do not a king-in-waiting make. Rather, the actor concluded, it’s his posture.

Mostly upright when he debuted in Season 3, playing Charles as a Cambridge student, O’Connor has since charted the prince’s emotional state through a progressively pronounced stoop, inching his neck forward as expectations from the House of Windsor gnawed at Charles’s contentment. By the time Mummy — Queen Elizabeth II, played by Olivia Colman — places the coronet upon her son’s head at his investiture as the Prince of Wales, you wonder if he has the strength to support it.

“It has to do with the more weight on his shoulders, the more it brings him down, the more his neck comes out,” O’Connor said. “By the end he’s pathetic, sort of like a crumpled man.”

It gets even worse in Season 4 of “The Crown,” now on Netflix, which brings a less sympathetic Charles, surly and sniveling as he bridles at his marriage to the limelight-stealing Princess Diana (Emma Corrin) while not so secretly yearning for Camilla Parker Bowles (Emerald Fennell), the love that never quite got away. (And who will presumably marry Charles in some future season, as she did in real-life in 2005.) 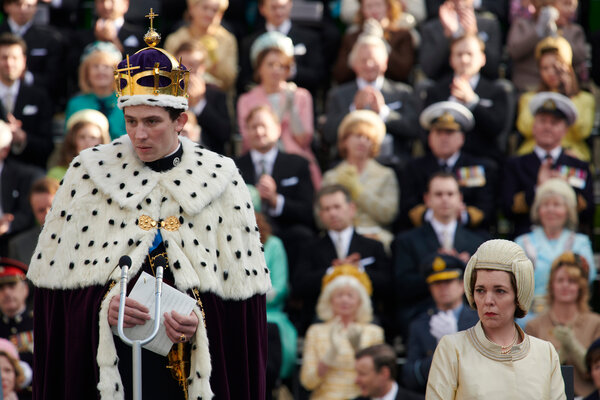 For O’Connor, 30, this season is the end of his run in a role he never really sought. A self-described liberal left-winger, the actor declined to read for Charles when he was initially asked. “I thought, I can’t add anything to this,” he said in a video call from London. “I’m a Republican — I’m not interested in the royal family.”

But he eventually acquiesced, and Peter Morgan, the show’s creator and writer, presented him with a scene. In it, Charles compares himself to a character in Saul Bellow’s “Dangling Man,” waiting to be drafted because going to war will give his life meaning.

“And then he says, ‘I’m essentially waiting for my mother to die in order for my life to take meaning,’” O’Connor said. “I read that line and I was like, ‘Well, that’s enough to get your teeth into.’”

The current season finds the prince increasingly exasperated with these circumstances, in terms of both the unhappy marriage that was thrust upon him and his continuing insignificance within the realm.

“We were telling a kind of unheard, voiceless Charles,” O’Connor said. “But that’s the beauty of it, that’s where he struggles: He doesn’t feel listened to.”

Charles isn’t imagining things. As his mother icily informs him in one gutting encounter, no one wants to hear his voice. No one.

O’Connor and Colman had a running joke that all of their scenes together were variations on the same sad theme. “Charles comes in, says, ‘Mummy, I need to talk to you,’ and she says, ‘No,’ and then he leaves,” he explained. Over and over.

As the queen, Colman said, “my job was to be quite strong, but I found it quite hard not to give him a cuddle.” Method actors they were not. “The second they’d say cut, we’d go: ‘Should we have a cup of tea? There are biscuits on the craft table!’ We’d much rather have a giggle.”

“He’s one of the most beautiful actors to work opposite,” she added. “He’s out there with the greats, in my mind.”

O’Connor grew up happily as the middle of three brothers in Cheltenham, a spa town on the edge of the Cotswolds. He trained at the Bristol Old Vic Theater School, whose alums include two of his idols, Pete Postlethwaite and Daniel Day-Lewis.

Not long after graduation, small TV roles in “Peaky Blinders” and “Ripper Street” trickled in. Eventually he snagged a lead as the oldest son in “The Durrells in Corfu,” a period drama by ITV and “Masterpiece” about a British family’s move to the titular Greek island in the 1930s.

But his real breakthrough came in Francis Lee’s 2017 feature debut, “God’s Own Country.” O’Connor is scarcely recognizable as Johnny Saxby, a gay, brooding binge drinker toiling on his family’s Yorkshire farm, whose calcified heart is pried open by a Romanian migrant worker.

Lee had invited O’Connor to audition based on a photograph. “I liked his ears a lot,” he said. But the tape O’Connor sent was worrisome.

“He delivered this incredibly brilliant portrayal of an emotionally repressed and difficult man, and I thought he must just be playing himself,” he said. “And that concerned me slightly.”

When the two finally met, Lee was shocked “because in walks this incredibly funny, upbeat, polite, middle-class boy, which was a million miles away from the character that he was going to play,” he said. “He’s one of those rare actors that is a real shape-shifter.”

O’Connor prepared by immersion, working for a month on a farm close to the West Yorkshire homestead where Lee grew up and birthing lambs between takes.

“We’d be doing a scene, and then they’d call, ‘Cut,’ and a van would come in and the real farmer, John, would say, ‘Josh, we got a lamb to come out,’” O’Connor recalled. “You’d deliver a lamb, send it on its way, wash your hands, ‘Action,’ and you’d be acting again.” By his count, he delivered around 150 in all.

“I started out a rubbish farmer,” he added, “and by the end I don’t know that I was a very good. But farmer John, who’s still a very good friend of mine, said that he might employ me one day.”

“God’s Own Country” earned O’Connor a British Independent Film Award for best actor in 2017. Two years later, he won another for “Only You,” about a couple struggling with infertility.

O’Connor debuted in “The Crown” in late 2019. Morgan can’t recall having considered anyone else for this iteration of Charles — or noticing O’Connor’s ears, though he imagines he must have.

Rather, “I was drawn to his sensitivity and the fact that he was complex but likable, and I just felt instantly intrigued,” Morgan said. “And the minute he started doing some readings for us, it was a no-brainer. He was a list of one.”

O’Connor had watched “The Crown” in support of his good friend Vanessa Kirby, who played Princess Margaret in Seasons 1 and 2. “And then I became a loyal fan,” he said. While he has difficulty aligning his belief in a classless society with the royal family, he doesn’t think “The Crown” glamorizes them, despite its pageantry and splendor.

“What Peter does is he strips all that back,” he said. “It’s about humans who struggle and have very odd relationships with their parents and power and politics. That’s the juice.

“But I think you can have those beliefs and have great respect and affection and love even for these people. I think the queen is an extraordinary woman. Time after time, lots of men have failed, and this one woman in power has been consistent and remained dutiful and generally apolitical.

“In that sense, I have huge respect for her — and for Charles, to be honest. I mean, Charles is another level of someone who’s literally been waiting his entire life for this moment that still hasn’t come.”

O’Connor’s, however, seems to be at hand.

He recently wrapped Eva Husson’s “Mothering Sunday,” based on the Graham Swift novella, alongside Colman, Colin Firth and Odessa Young. And he’s currently in rehearsals opposite Jessie Buckley (“I’m Thinking of Ending Things”) for a National Theater film production of “Romeo & Juliet,” set to air in the spring on PBS and Sky Arts.

“He’s a rogue,” Buckley said. “He comes with a twinkle and just the right amount of danger. You feel safe, but you know that we’re both going to be daring each other to jump off the cliff.”

In the Season 4 finale of “The Crown,” O’Connor does just that: Dared in a way by Morgan, he drops Charles’s polished facade and furiously rips into Diana about Camilla.

“A lot of these Windsors have famously shocking tempers,” Morgan said. “And I said, ‘Look, just really, really go for it and show your anger and show your heart.’”

He added: “It’s crushingly painful, and this goes to the duality of how one feels about Charles. At the same time as he’s being unbelievably cruel to the woman he married, he’s being incredibly loyal and steadfast to the woman he loves. I think Josh captured that brilliantly.”

The scene is O’Connor’s favorite of the season.

“If the beginning was the investiture,” he said, “then the end was always going to be the breakdown of the marriage, where he says” — bellows, really, his neck straining — “‘I refuse to be blamed any longer for this grotesque misalliance.’”

“That line to me is everything,” O’Connor added. “And it was my closure to Charles. It was my way of saying: ‘Cool. Done my job. Goodbye.’”