The past few days have been a rollercoaster for fans of Jennifer Lopez and Alex Rodriguez who were reported to have called off their engagement on Friday before subsequently confirming they were still together but “working through some things” in a statement. Luckily, it seems like J.Lo is not bothered at all by the recent news surrounding her rumored split with her fiancé. The singer took to TikTok to share a feisty montage of stunning clips and photos of herself before headlines briefly flash on the screen that references the recent drama with A-Rod. (See the shady TikTok video here). Welp, that’s one way to send a message! 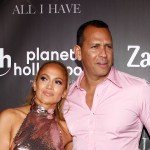 
Jennifer Lopez and Alex Rodriguez Issue a Statement on Their Relationship

Set to Saweetie’s song called, “Pretty Bitch Freestyle,” Lopez had fans swarm the comments to say “🙌🙌🙌🙌tell em queen!” The video includes scenes from her jaw-dropping dance in Hustlers, her performance at President Joe Biden’s inauguration, and a ton of stunning selfies. But it’s the inclusion of headlines about her speculated botox use, news of her reported split with Rodriguez, and A-Rod telling photographers “I’m not single” as Saweetie raps “I ain’t worried about a blog or a bitch” that has everyone praising the star.

Lopez plainly captioned the post, “Sunday brunch playlist.” Lopez is currently filming the movie Shotgun Wedding in the Dominican Republic while Rodriguez is in Miami.

“She’s working in the Dominican Republic and he’s in Miami so it’s tough seeing each other especially with quarantining and COVID,” a source told People, adding: “but they want to try to stay together.”

Ultimately, Lopez’s TikTok highlights exactly what we’ve always loved about her: she’s 100% confident in herself. The actress isn’t looking for anyone else’s approval about her relationship and whatever decision she makes in the future will have her best interests in mind, not the public.

Before you go, click here for all the celebrity splits and divorces we never saw coming.