It’s Getting Harder To Breathe for Adam Levine Post-Cheating Scandal, so Maroon 5 Is Headed to Sin City for a Vegas Residency

Adam Levine isn’t letting any Instagram DM scandal get him down. He’s plowing ahead with Maroon 5 and a Las Vegas residency, M5LV • THE RESIDENCY, beginning in March 2023.

The announcement comes on the heels of Instagram model Sumner Stroh, and reportedly four other women, who have accused the Maroon 5 frontman of sliding into their DMs while married to supermodel Behati Prinsloo. Levine blamed “poor judgment” and maintains that he “did not have an affair” with Stroh, despite her allegations that they had a year-long entanglement. He and Prinsloo, who is pregnant with a baby boy, have shown a united front ever since the scandal reared its ugly head.

Levine and his bandmates are pretending that the only news right now is their Las Vegas residency writing, “We’re headed back to Vegas! Tickets on sale Monday Oct 3 at 10AM PT.” But naturally, the comments on the Instagram post were turned off, so they do have some awareness that Levine’s personal life is drawing lots of social media conversation. They did forget to limit commentary on Twitter, and a few fans made sure to take a dig or two at Levine. “Lmfao good luck selling tickets,” wrote on user. Another tweeted, “I know it’s already Fall. But I have to ask why doesn’t it called Sumner Tour?” Oof, Levine has a long way to go on his path to forgiveness.

For now, it’s going to be business as usual for the “Moves Like Jagger” singer, who promised that he has taken “full responsibility” for his actions and is now focused on his growing family. Levine summed up in his Instagram Story last week, “We will get through it. And we will get through it together.” 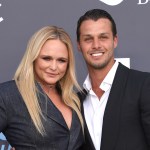