On the Tuesday morning in June 2015 when Donald J. Trump waved his way down, down, down a golden-edged escalator in Trump Tower to announce his presidential candidacy on a stage below, he set the United States on a trajectory that much of the country wasn’t anticipating. The theater, for one, was busy heading in a very different direction, and in a vastly different spirit.

“Hamilton,” already a phenomenon downtown, would alight on Broadway in less than a month, powered by an exhilarating wealth of talent — people of color, almost all. Rebuking in rhyme the racism and xenophobia that have always been embedded in the American way, it was a potent emblem of the Obama years: This is what greatness can be.

But the momentum that started with “Hamilton” in the theater only accelerated during the Trump administration. As artists watched liberties threatened and inequities exacerbated, the work we saw became more urgent than it had been in decades, and thrillingly so.

For the most part, it didn’t aim straight at the president, though a “Julius Caesar” with a Trumpian title character managed to trigger the right-wing outrage machine when Oskar Eustis staged it in Central Park in 2017.

Rather, producers elevated formally adventurous, politically incendiary plays — like Heidi Schreck’s “What the Constitution Means to Me” and Jeremy O. Harris’s “Slave Play” — that spoke meaningfully to our nation’s troubled soul. Audiences, hungering for that holiest of dramatic experiences, catharsis, used the ritual of theatergoing to think and hurt and heal.

This is not to credit Trump, who has demonstrated little use for culture beyond celebrity. It is simply to acknowledge, with wonder and gratitude, the abundance of work crackling with brilliance that lately has enriched the theater. 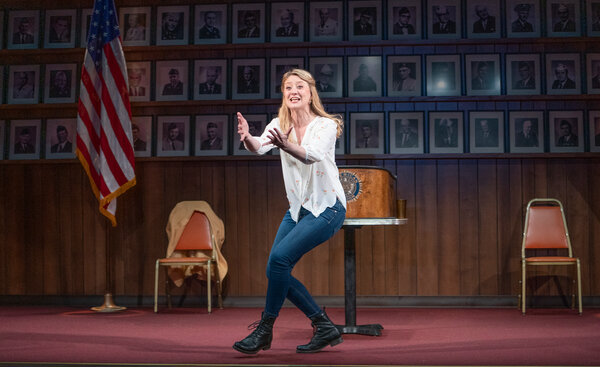 Not that American stages were or have become any kind of Eden. For all their professed liberal inclusivity, they are and always have been dominated by white men from comfortable backgrounds. But the advent of Trump, with his swaggering, tough-guy masculinity and aggressive, loud-and-proud whiteness, demanded action.

The theater couldn’t get away anymore with just talking the talk. If it was what it claimed to be, it had to listen at long last to calls for change and begin to walk the walk.

And it did so in the smartest possible way, responding to Trump as to an emergency. It largely did not get lured, the way a lot of the media did, into turning its spotlight on his supposedly disenfranchised supporters. There was no deluge of plays about the president.

Quick takes produced in 2017, like Robert Schenkkan’s “Building the Wall” and Michael Moore’s “The Terms of My Surrender,” didn’t add much to the discourse, and Anne Washburn’s 2019 “Shipwreck” hasn’t aged well. Will Arbery’s dispatch about conservative Catholics in the heartland, “Heroes of the Fourth Turning,” was an Off Broadway hit, but having been raised Catholic in flyover country, I found it less than revelatory.

What proved vital was the critical mass of works that probed the roots of our distress and enmity. Although many were in development before Trump’s election — none of the social ills that have consumed us sprang into being in 2016, after all — their staging during his tenure asserted a creed directly counter to the one espoused by the White House.

After women across the country greeted the Trump administration by marching through the streets in pink pussy hats, we saw female anger and the reasons for it taken seriously onstage, in shows like Aleshea Harris’s “Is God Is,” Halley Feiffer’s “The Pain of My Belligerence” and Kirsten Childs’s “Bella: An American Tall Tale.”

“What the Constitution Means to Me,” a sunnily furious, meticulously argued indictment of the nation’s second-classing of women, struck such a chord that it transferred to Broadway, went on a national tour and was filmed for Amazon.

Off Broadway, Emily Mann’s Gloria Steinem bio-play “Gloria: A Life” became an event in a way it likely would not have been if so many feminists hadn’t felt so alarmed by the president. Something similar happened with Waterwell’s “The Courtroom,” a verbatim performance of immigration court transcripts that forced audiences to consider how we as a nation — even under Trump’s predecessors — had gotten so cruel.

As the crisis of lethal violence against Black bodies became ever more dire, Aleshea Harris’s “What to Send Up When It Goes Down,” Antoinette Nwandu’s “Pass Over,” Dael Orlandersmith’s “Until the Flood” and Nataki Garrett and Andrea LeBlanc’s “The Carolyn Bryant Project” were blistering feats of witness and interrogation.

And, of course, “Slave Play,” whose set reflected our faces back at us, insisting that we recognize our involvement in its trauma. (That design, by Clint Ramos, got one of the show’s record-breaking 12 nominations for the yet-to-be-held 2020 Tony Awards.) Like “Constitution,” it was an unusually provoking show for Broadway.

Ditto Young Jean Lee’s “Straight White Men” (not a love letter to them) and Taylor Mac’s corpse-filled tragicomedy, “Gary: A Sequel to Titus Andronicus,” about the bloody messes that rulers make and ordinary people are left to clean up. Its tiny glimmer of hope for the future was a baby wearing a shark onesie. That’ll scare Trump, huh?

Just as thoughtfully political were shows like Michael R. Jackson’s Pulitzer-winning “A Strange Loop”; Shaina Taub and Laurie Woolery’s “As You Like It”; and David Byrne’s “American Utopia,” each an openhearted musical affirmation of our shared humanity.

Some of my memories of theatergoing in the Trump era seem even more lacerating now. At Ensemble Studio Theater in May 2017, Emily Chadick Weiss’s “The Fork,” a one-act comedy about killing the president, was met with delighted, unhesitating laughter — a response as jarring at the time as it was telling about the state of our civic health.

Then there was a 2018 performance of “Constitution” at New York Theater Workshop, only days after Christine Blasey Ford’s Senate committee testimony and before Brett M. Kavanaugh’s confirmation to the Supreme Court. In that fraught week, the raw sobs of a woman behind me drowned out whole passages of dialogue.

There was also an afternoon at Theater for a New Audience in 2019, when quite a few white spectators at “Fairview” stayed planted in their seats even as the show, making its central point, dared them to look at the space we were sharing from an unaccustomed vantage.

What echoes loudest in my mind, though, is a question from the French director Ariane Mnouchkine. In the fall of 2017, I went to Paris to watch her rehearse her company in “A Room in India,” a play she was bringing to New York. I had been at the company’s theater only minutes when she told me, worriedly, that three of her Afghani-French actors were having trouble securing their visas. She blamed Trump.

Then she asked me, sharply, “What have you done?” By electing him, that is — and it didn’t matter whom I, personally, had voted for. She meant all Americans, because his election had happened on our watch.

Her question, I think, is at the root of the American theater’s response to Trump’s ascent, which blindsided not just much of this country but also much of the world. If we as a people were to make any sense of it, we had to ask ourselves what we had done and how things had gotten so bad.

The old intellectual parlor games wouldn’t do the trick. To process this, new stories were required.

So the theater, beginning to dismantle some of the walls that had kept so many people out, tapped into the profusion of artistry waiting there. In doing that, it rose to the task.

Now, faced with the existential challenge of coming back from the pandemic shutdown, it has to keep at it. It cannot revert to old inequities, onstage or backstage.

As Schreck‘s debate opponent argues in “Constitution”: “Just like us this document is flawed. But just like us it is also capable of getting better.”

So is the theater.