George Benson is many things to many different people, but he’s a jazz musician at heart. The 77-year-old guitarist and singer has traversed the worlds of pop, R&B, soul and, of course, jazz, tasting success while also learning how to field any criticism that came from changing his sound along the way.

His career has been helped by an unwavering faith in his creative vision and bonds with influential figures that became pivotal to his development. He started out seven decades ago, playing the ukulele in his native Pittsburgh, home to a rich cornucopia of elite Black talent: Art Blakey, Lena Horne, Ray Brown, Paul Chambers. In a recent phone interview, he recalled how Eddie Jefferson, the pioneer of vocalese who wrote jazz standards like “Moody’s Mood for Love,” recognized his own potential for vocals while performing on a street corner, and prompted Mr. Benson, then 7 or 8, to sing “I’ve Got the Blues.”

“Pittsburgh was the last big stop,” before headed to places like New York, Mr. Benson said. “It had a lot of musicians there who were trying to prove themselves, trying to learn how to play.”

Over the years, Mr. Benson collaborated with Freddie Hubbard and Minnie Riperton, and later with Mary J. Blige, Jill Scott and Gorillaz. However, it was the release of his three-times-platinum 1976 album “Breezin’” that brought him his greatest commercial success and multiple Grammys. It was a rare feat for a largely instrumental record to make the pop and R&B charts then, but critics still took umbrage with his early ascension into smooth jazz.

With “Weekend in London,” Mr. Benson’s first live album in 30 years, due Friday, he not only honors his unique musical path, but also credits those along the way that have shaped him and his career — which includes audiences. “They’re right down your throat,” he said of playing the intimate club Ronnie Scott’s, where the set was recorded, “but I can look into their faces and see the happiness or the response by what they’re hearing on the bandstand.”

These are edited excerpts from the conversation.

How was Wes Montgomery pivotal for you?

When Wes Montgomery came to Pittsburgh, I had to meet him, because I had heard about him when I was a little boy. They told me there was a guy who played guitar like nobody else, that he played with his fingers, but he actually played with his thumb — there was no pick in his hand. So when I met him, I asked him if he would teach me something and he said, “No.” He was the first guy who said no. I was a teenager then, maybe 17 years old. I said, “Why not?” He said, “I’m still trying to learn how to play myself.”

And that really got to me. [Laughs] He’s the greatest guitar player in the world and he’s trying to learn how to play? I understood later what he was trying to say, because I feel the same way. You know, people ask me about the guitar and I say, “Man, I’m still trying to get it together myself, trying to learn this instrument.” But that’s how him and I met, and we became very good friends.

Years ago, I was supposed to play him in this movie. His story was incredible. His career grew up commercially on records, like “Goin’ Out of My Head,” “Windy,” “Tequila” and all those wonderful records he made, in addition to all the great jazz records he had made. But when he came home to play in Indianapolis, every time he played a commercial tune, the audience booed. I couldn’t even imagine it. And the reason is the only Wes Montgomery they knew locally was a jazz guitar player. And so when he became commercially successful, naturally this was a lash back by the people: “Well, I want him to play more jazz.” People always want what they don’t have. 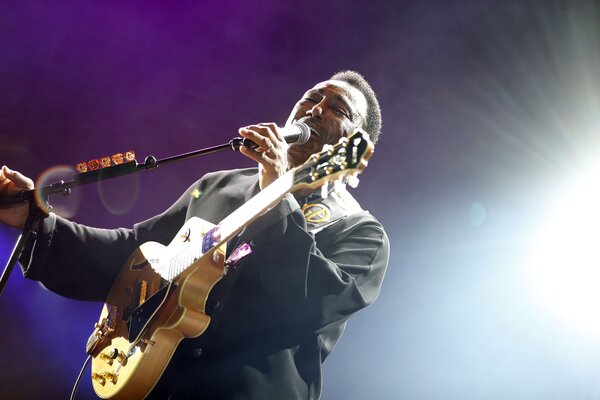 It’s hard not to think of the similar backlash you faced when you released “Breezin’,” which became your biggest LP but drew some of your harshest criticism. How did you ultimately navigate mainstream success?

It’s the critics’ job to dissect things. And to dissect it pretty much the way they want, but that’s not the reality. The reality is you got a record that would have gone on the shelf unnoticed. Now it’s selling in the hundreds of thousands. And then you analyze it: Who do we make records for — critics or the people, who go to the store and spend their hard-earned money to buy it because they like it?

So believe me, I never made a big to-do out of it. But it helps me to remember this. I once did a recording with Frank Sinatra, and he called me over. I didn’t even think he knew who I was. He said: “Mr. Benson, your guitar playing, we all know and we love that. But I love your voice too.” When he said that to me, I dismissed all those bad reviews of music, talking about my voice and treating me like a dog. Sinatra said he loved my voice. That’s it!

How did you come up with the overall concept for “Breezin’”?

One great thing I learned when I played with the Jack McDuff Quartet — that’s the guy who took me out of Pittsburgh when I was 19 years old, and I was on the road with him for two and a half years — he did what you call a head arrangement on everything, something off the top of his head. And he threw it together and we all learned it the way he wanted us to learn it. And it worked. So I was in the habit of doing that. Everything you hear from me usually comes basically off the top of my head.

Like “On Broadway,” when I first told the band I was going to change the arrangement to boom, boom, boom-boom-boom-boom, my bass player said, “George, that won’t work.” And I lashed back. I said, “Man, you weren’t even born when this song came out.” I said, “Can you just do it like this, just this one time?” And the record came out, and it became a smash. [Laughs]

Stevie Wonder’s “Songs in the Key of Life,” which you played on, was another seminal album of that era.

First of all, his wife Syreeta was from my hometown. I believe he came to Pittsburgh to see her. And whenever I was there, he would come down to this jazz club and sit in with me. And here’s the surprise: Nobody believed he was Stevie Wonder! [Laughs] He looked like him, sang like him, talked like him. But they just couldn’t believe that Stevie Wonder was sitting in at a jazz club on one of my gigs.

I was a nobody then. A few years later, my career blew up, and he invited me to be on that album. And he’s one of the great geniuses of our time. You know, whatever he does, his playing as a pianist is innovative, warm, romantic and funky.

His voice is unbelievable. He’s got power, even though sometimes he sings very soft, the power never leaves either in the way he approaches things, his phrasing, or in the lyrics that he’s writing to go along with those incredible melodies that he puts together. He’s slow in getting things done, but that’s why his stuff is always so good, ’cause he thoroughly thinks things out. He doesn’t throw music together. So I learned a lot just from hanging out with him.