He’s Heir to a Fruit-Juice Empire, but His Main Focus Is Art

LOS ANGELES — To your left in the foyer are Damien Hirst’s dots. Over the fireplace is a Louise Bourgeois spider. Opposite the master bed are Cy Twombly’s swirls.

Los Angeles is not necessarily known as a city of art collectors, but nestled smack dab in Beverly Hills is among the more active buyers in the market: Eugenio López Alonso, heir to the Grupo Jumex fruit-juice empire in Mexico, who has landed on an ArtNews list of the top 200 collectors in the world for at least five years running.

Many credit López, 53, with helping elevate Mexico’s contemporary art scene through the institution he founded in 2013, Museo Jumex. Every work on display there during the Zona Maco art fair in May was by an artist from or living in Mexico, Artnet noted. 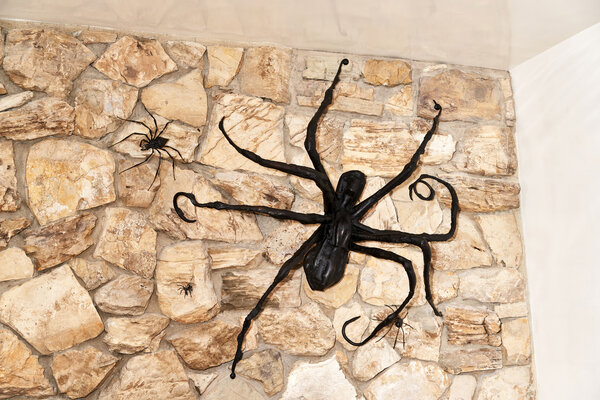 With Museo Jumex, designed by David Chipperfield in the Polanco neighborhood of Mexico City, López joined the ranks of collectors who have started their own private museums.

“Jumex was as transformational to Mexico City as was the opening of the great anthropology museum in 1964,” said Marc Porter, the chairman of Christie’s Americas. “Eugenio’s museum confidently re-established the capital as a center of the contemporary art world.”

Before the museum, López ran the Fundación Jumex Arte Contemporáneo, a nonprofit in Ecatepec that he established in 2001 with support from Grupo Jumex, the company founded by his father, Eugenio López Rodea.

The foundation — which has been folded into the museum — gives awards to curators and artists for postgraduate studies abroad; underwrites and lends art to major exhibitions; and supports a variety of educational programs in Mexico and the United States.

The Museo Jumex did face some upheaval last year in the wake of several departures, most notably that of the artistic director Julieta González and the adjunct director Rosario Nadal, after the directorship quietly changed hands. (Neither could be reached for comment, and López declined to discuss this.)

The museum was also criticized by some in 2015 for canceling an exhibition of the work of the Austrian artist Hermann Nitsch, who is known for his violent images involving carcasses. (Patrick Charpenel resigned as director amid the controversy over the cancellation of the show; he is now director of El Museo del Barrio and did not respond to a request for comment.) López said he had wanted to postpone the exhibition, not cancel it, and present it as part of a four-artist show, “the way it was supposed to be.”

With more than 2,800 works, López’s collection is among the largest in Latin America. In 2006, The Los Angeles Times put López’s total spending on art to date at $50 million to $80 million; López said that figure was “higher now,” though he would not be specific.

His taste is bold and eclectic, with works from blue-chip artists like Donald Judd (one of his vertically hung “stack” projects) and Jeff Koons (a sculpture in the backyard) alongside pieces by Mexican artists such as Gabriel Orozco, Mariana Castillo Deball, José Dávila and Pia Camil — all of it purchased in consultation with Esthella Provas, a close friend and art adviser.

His house is a feast for the eyes of any art lover, with work on every surface — here a Catalan, there a Richter, around that corner a Rauschenberg. His home in Mexico City is also awash in heavy hitters, such as Richard Serra, Julie Mehretu, Lucio Fontana and Ellsworth Kelly.

In a recent interview at his midcentury Los Angeles home, López talked about developing his deep love for art.

For 12 years, starting in 1994, you ran the contemporary art gallery Chac Mool in Los Angeles with Esthella, who has remained your art adviser. How did that experience influence your becoming a collector?

Every piece that came to the gallery, I didn’t want to let it go.

What was the first major piece you purchased?

How did you learn about art?

I went to museums — bothering people, asking them questions — curators, collectors, learning about galleries. I lied to my father about going to the factory for machinery in Dallas when I was really going to the Menil Collection opening [in Houston].

How have you decided what to purchase?

What made you decide to start the foundation?

What are your favorite genres?

I love the Abstract Expressionists and the Pop Art.

Twombly. I have six Twomblys. It’s something I cannot explain to you. Why? Because I’ve never seen that kind of aesthetic done in any other work of art. It looks like a child’s scrawl.

You don’t sell art very often. What do you think of those who approach art as an investment?

You divide your time between Los Angeles and Mexico. What makes you keep coming back here?

The happiest moments of my life have been in this house. I’m Mexican; Mexico is my great love. But my hometown is Los Angeles. There is no other place where I feel more comfortable in my life.