Heidi Klum celebrated her 48th birthday on Tuesday, June 1, and as proven by a fierce photo shared by Klum’s teenage daughter Leni, the stunning supermodel becomes exponentially more beautiful with every trip around the sun. This last one was obviously no exception. 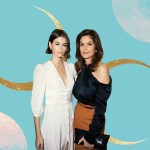 
These Kids Are Following in Their Supermodel Moms' Footsteps

“BEST FRIENDS BIRTHDAY!! I LOVE YOU MAMA,” 17-year-old Leni Klum captioned the sweet snapshot of the mother daughter duo (see the birthday photo here), in which the pair look more like identical teenage twins than parent and child with a 31 year age gap.

Their remarkable resemblance is appropriate — astrologically speaking, at least. Gemini, the season in which Klum’s iconic birthday falls, is represented by twins! “Gemini” actually translates to “twins” in Latin, and the Gemini constellation represents twins Castor and Pollux in Greek mythology. Twinning facts for Heidi Klum’s birthday!

(And, of course, we should also give credit to Klum’s clearly incredible genes.)

Leni takes after her mom professionally, too, having just modeled her first magazine cover, Vogue Germany, in December 2020, followed shortly by her second cover for Glamour Germany in April. A proud Klum took to Instagram to celebrate the now-17-year-old’s fashion feat, with a vulnerable Instagram post congratulating her achievement while acknowledging that her upbringing in the limelight could be challenging.

“I know that it’s not always easy to be my daughter,” Klum wrote in her post, which SheKnows’ Louisa Ballhaus translated from the original German. “You never had the possibility of growing up ‘normal.’ But what is normal? Growing up with three different daddies probably isn’t either.”

“Normal” or not, it’s clear that Klum and Leni have a wonderful relationship! Happy birthday, supermom!

Before you go, click here to see all the famous ’90s supermodels who have since become moms.