Georgina Chapman, British designer and co-founder of the Marchesa label, has not been what you could call lucky in love, filing for divorce from convicted rapist and disgraced film producer Harvey Weinstein in 2018 and keeping an understandably low profile ever since. As Weinstein himself is shuttled from trial to trial and prison to prison while being tried for his various crimes, Chapman seems to have taken a substantial step forward in her own life by taking up with a certain A-list actor in his absence. While she was first linked to star Adrien Brody in 2019, Chapman has only now felt comfortable going public with her new man, and their series of couple debut photos certainly make these two look comfortable with each other. 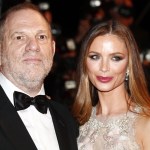 
A Look Back at Harvey Weinstein & Georgina Chapman's Relationship

At the Tribeca Film Festival on Saturday evening, Chapman and Brody showed up in their red-carpet best for the premiere of Brody’s new movie Clean, a crime thriller about a man grappling with his guilty past. Posing with linked arms and smiling for the camera, these two were seasoned pros at stopping for the press and letting their newly public romance be captured for the world.

The allegations against Weinstein were first published in The New York Times in early 2017, setting off a cascade of further allegations from victims who now felt empowered to come forward. In October of that year, Chapman announced their separation, and their divorce was settled in 2018, an agreement including Chapman retaining primary custody of their son Dashiell and their daughter India Pearl and getting an alleged payout of up to $20 million.

Brody is Chapman’s first public relationship since her high-profile divorce, and proof she’s retained her high-caliber Hollywood connections in Weinstein’s absence. We’ve got our eyes on Brody — this family has been through enough heartbreak.

Before you go, click here to see celebrities who have opened up about surviving sexual assault.