LONDON — She has created stadium extravaganzas for Beyoncé and Kanye West, fashion shows for Louis Vuitton, and theater sets for Harold Pinter. Now the stage designer Es Devlin, having collaborated with many of the greats, is getting ready for her own show.

Ms. Devlin, 49, is one of three artists (along with TeamLab and James Turrell) scheduled to exhibit work next year at Superblue, a new experiential-art center in Miami, housed in a 50,000-square-foot former industrial building. The brainchild of Marc Glimcher, the president and chief executive of Pace Gallery, was to debut this month, but the opening was postponed because of the coronavirus pandemic, which also forced Art Basel Miami Beach to move online.

Ms. Devlin recently spoke about her work in an interview at her Edwardian house in a leafy area of south London. Her team occupies the front rooms, which lead to a sprawling communal area and kitchen with floor-to-ceiling windows overlooking a landscaped garden.

Ms. Devlin, whose first name is short for Esmeralda, grew up in Rye, near the southern coast of England, and spent many a weekend at a local heritage center, gaping at a scale model of the town in Victorian times. Lights would go on, and the miniature houses would start telling stories of who once lived there.

As a student of English literature at the University of Bristol, she dabbled in theater — playing Leper No. 8 in “Jesus Christ Superstar” — and went on to study stage design in London, where she made scale models of her own. Winner of the prestigious Linbury Prize for Stage Design, she graduated to designing real-life stage sets. Three years later, she was hired by the National Theater to create sets for the 1998 revival of Harold Pinter’s “Betrayal,” with the playwright present.

It was the start of a thriving stage career that led her to work for theater, opera and huge rock and pop acts (U2, Miley Cyrus). Most recently, she designed “About Time: Fashion and Duration,” now on display at the Costume Institute of the Metropolitan Museum of Art in New York.

The following conversation has been edited and condensed.

How do you feel about showing your work in Miami?

I have been dazzled by the geographical beauty and cultural joys of Miami since I first visited 20 years ago. Yet Miami is ever more surely set to be swallowed by sea. Current predictions suggest nearly a million residents will be displaced by rising water levels before the end of the century.

My work, “Forest of Us,” was conceived specifically for Miami, where the flood feels more poignantly imaginable than elsewhere, and where hope and activism are striving ever more forcefully to lead us back from the brink.

Tell me about the show.

The piece starts out as a film, a journey through a forest. Gradually the forest leads you toward understanding the branching structures of trees. Then you find that you’re not looking at a tree, actually, but at a bronchial tree: You’re looking inside the lungs, and you make the connection. You understand that the exchange of gas that’s going on inside of us and outside of us is mutually dependent. You then walk through the screen and into a labyrinth. 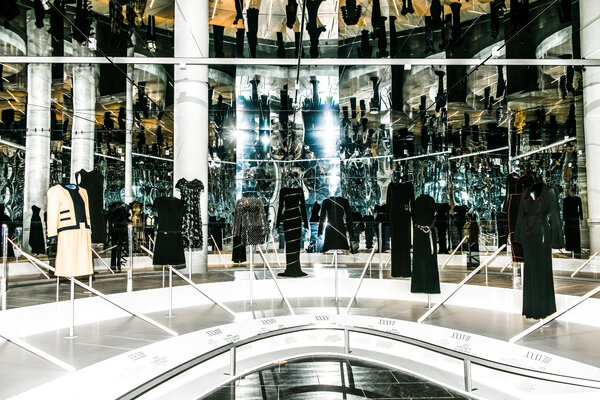 How did you become involved in “About Time”?

In 2013, when Nicolas Ghesquière took over women’s fashions at Louis Vuitton, he was looking for a partner in design for his shows. We’ve done three fashion shows a year together ever since. When Vuitton was sponsoring the Met Costume Institute exhibition, I was introduced to the institute’s curator, Andrew Bolton.

I’m not a very fashionable person: Clothes are not how I express myself. I want to be able to work and play instruments with my hands. Anything that takes time or is uncomfortable, I’m not interested in.

Why is it that the pressure points are all about childbearing — the belly, the boobs, the butt? Is it that as a culture, or as a species, we’re fascinated with the parts of us that are going to reproduce and entranced with the possibility of our own futures? I think that’s what it’s really about.

Were you intimidated working with Pinter in your 20s?

No, I was overenthusiastic. “Betrayal” is the most extraordinary poetic work of drama. But the last thing it needs is an all-singing, all-dancing set design that’s trying to be a piece of fine art. It would have been perfectly happy in a simple white standing-set room. And there was me with travelators [moving walkways] and projections overlaying everything. Harold made a joke about it. He introduced me to his wife, Antonia Fraser, and said: “This is Es. She wrote the play.” I think that was him being really bitchy, but kind of funny.

When did Kanye West approach you?

In 2003, when I had done my first pop concert at the Barbican, I took photographs of it and stuck them on a website. Someone I knew was working with Kanye and overheard him firing a set designer in a rage. He told Kanye, “Look at this.” I got a phone call saying, “Can you come to New York tomorrow?” It was my birthday, and I was out at dinner with my friends.

I took two big suitcases of really heavy books and spread them all out in the hotel suite where Kanye was and exchanged ideas. I had done my research on the plane, read every lyric. I was looking for text.

Kanye had fallen asleep at the wheel and crashed his car a couple of years before I met him, and his jaw had been wired up. He has a song called “Through the Wire” which says: “I’ll spit it through the wire.” And he sings through a wired-up jaw. For me, that was the story. So I came up with this whole fantasy about how to do this.

He’s fantastically intelligent and incisive and very fast-witted. My antennae are quite sharp on when not to talk. If you’re working with a very quick mind, sometimes you’re just going to be one step behind. So you just wait and take the next wave.

Any of the people I’ve come into contact with who have reached that level of celebrity, what unites them is that they work their socks off. I’ve never been offered drugs or drink. None of them drink. As far as I know, they just don’t stop working. Work, work, work.

What I will say with the women is that there’s a lot of time involved in the appearance — hours of time. Which is why quite a lot of the meetings I do with them are while the nails and the hair and makeup are being done.

In “The Lehman Trilogy,” the play about the collapse of Lehman Brothers, you use a revolving cube onstage, your signature device. Why?

If you’re used to seeing film, you go into the theater and are like, “Why the heck am I sitting here? The seats are really uncomfortable. I can’t go and get a cup of tea.” Your audience is a 21st-century audience that has been used to shifting camera angles. So the revolve is a way to endlessly turn pages of a book, endlessly shift camera angles.

If you’re going to sit for three hours, with our beautiful three actors and a pianist, and we’re trying to cover the rise and fall of Western capitalism over one and a half centuries, let’s give it a bit of kinetic momentum to allow the audience to feel transported.

How did you become involved in designing the British pavilion for Expo 2020 Dubai (now postponed until October 2021)?

This was a tricky one. The U.K. had voted to leave the European Union. I didn’t agree with the Brexit decision, was firmly against it and was being invited by the U.K. to represent the country at the World Expo — and to be employed by the government that made the decision.

John Sorrell, the head of the London Design Festival and a real mentor to me, said, “Look, regimes will come and go. The people who work in government in the civil service are trying to carry on doing the work. Don’t resist.”

I went back to a project I had done for the Serpentine Galleries’ summer fund-raising party in 2017. I said, what if we invited everybody who comes that night to donate a word? At the end of it, the outcome is a poem, and everybody can take the poem home with them. So we made a photo booth, and everyone streamed in and had a photograph of themselves with their two-line poem. The whole thing added together to make a cumulative poem, which is still ongoing. That was the beginning of this idea of fusing people’s words together into a collective poem.

I thought very strongly that Britain should be represented as the most diverse place, because that’s what I love about this country. In a post-Brexit Britain, the way to represent ourselves on the world stage would be as a meeting point. This is a place where every person’s voice can be joined into one text. That’s the utopian idea of it.