Hulk aside, there are few people in the Marvel Cinematic Universe as rightfully pissed off as Sharon Carter.

Sure, aiding and abetting Steve Rogers has its perks (if you had the chance, you’d probably make out with Chris Evans, too, OK?), but by the end of “Captain America: Civil War,” the former S.H.I.E.L.D. agent was branded an enemy of the state and forced to go on the run after giving everything to her job and country.

Cut to: the government raining pardons down upon her souped-up compatriots and Steve journeying through time to finish off his love story with her great-aunt Peggy Carter, leaving Sharon out in the cold to fend for herself.

And so she did in last week’s episode of “The Falcon and the Winter Soldier,” in which viewers got their first introduction to Sharon in the Disney+ series, when the titular heroes crossed paths with her in the island city Madripoor. But this version of Sharon is a far cry from the law-abiding, relatively one-dimensional love interest we met all those years ago. She’s jaded. She thinks heroes are a joke. She’s brutally mowing down a group of bounty hunters with ease in one of the bloodiest fights in Marvel history.

For Emily VanCamp, who was first approached about the role nearly a decade ago, finally fleshing out who Sharon Carter is outside of her relationship with Captain America offered a chance at redemption for her character.

“It’s definitely nice to see Sharon independent of that relationship in this totally new light. It was a blast to play this edgier version and to kind of reinvent her a little bit,” VanCamp told HuffPost in between shooting scenes on the Fox medical drama “The Resident.” “Sharon when we see her now is a bit cynical. That wide-eyed, young agent that she once was is no longer.”

A Sharon Carter redux is especially gratifying for fans who had seen her reduced to a highway-side smooch with a man who may or may not be her relative in some alternate timeline.

VanCamp said it was “unfortunate” that for some fans the kiss was the lasting impression of her character, who has a much longer and complex history in comic book canon. Known as Agent 13, one of the most deadly operatives in the game, Sharon Carter becomes the first female S.H.I.E.L.D. director, leads an all-female task force and just so happens to save Captain America on the regular in some of her various iterations throughout the years.

But in the Marvel movies, we haven’t seen all these sides to Sharon, who’s now been left to pick up the pieces of her life after being abandoned by the only person she trusted.

“We’re protective of our characters, too. So I definitely understand that view from fans and viewers of the movies that there was an injustice that was done there,” VanCamp said about the perceived mistreatment of her character.

“But then as a viewer of the films myself, I also loved how it ended for Steve and Peggy. So, it’s kind of nice that they got their happy ending and that Sharon gets to come back and kick some butt. You can’t get everything right in big splashy movies like that,” she continued. “And if that kiss … at least we get to move on from it.”

While fans of Sharon might understandably hold a grudge against Steve, VanCamp says her character’s anger is more directed at the “establishment and the government that she grew up trusting.”

“We don’t even address any of that Steve stuff with Sharon in the series, which I thought was good,” VanCamp revealed. “We’re into this new world and phase of her.”

While the old Sharon could certainly hold her own in a fight, the new Sharon is downright ruthless. She doesn’t seem to give a second thought to murdering a dozen or so bad guys: In a sequence that felt more at home in a “John Wick” movie than on kid-friendly Disney+, Sharon leaves behind a trail of broken bones, stab wounds and bloodied, bullet-ridden bodies.

“There were so many discussions about the levels of violence and which weapons Sharon would use,” VanCamp said about the fight. “The tricky thing is Sharon doesn’t have super powers, so to get to see this side of her and really inform who she is at this point and what she’s had to go through, there had to be some brutality involved.” 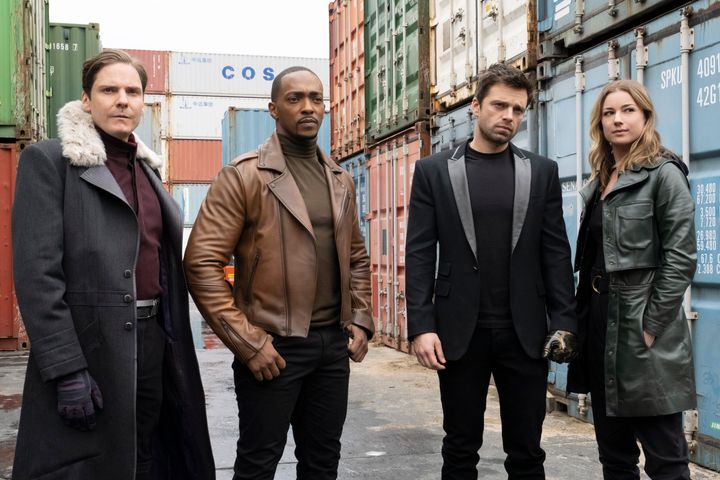 The character’s steely disregard for human life has some theorizing whether she might have a bigger and more nefarious role to play in the series ― perhaps even as the mysterious and well-connected Power Broker from whom the episode gets its name.

While VanCamp couldn’t reveal too much about the final three episodes of the season, she noted that characters “especially within the MCU are capable of anything at any given moment.”

“It’s pretty obvious that Sharon feels wronged and she is hardened,” VanCamp said. “But is she capable of that? It’s hard to say.”

“The lines are very blurred and there are a lot of gray areas,” she continued. “That is a much more interesting way to approach villains in general. In a way, we have to be able to sympathize and empathize with them. It just makes for a much more complex story and I definitely think that is the way forward.”

While the character’s true allegiances remain to be seen, there’s one thing VanCamp made relatively clear: Don’t expect to see Sharon suit up in her signature look from the comic books anytime soon.

“Everyone wants to see the white outfit! That’s not up to me,” she said. “It wouldn’t have made sense obviously [because] she’s a fugitive still, but maybe someday we’ll see.”