Charles Ginnever, Sculptor on a Grand Scale, Dies at 87

Charles Ginnever, whose striking metal sculptures can be seen on museum grounds, in parks, outside public buildings and dotting college campuses all over the United States, died on June 16 at his farm in Putney, Vt. He was 87.

His family announced his death.

Mr. Ginnever, working largely in steel, made massive geometric forms that often seemed to defy gravity — giant squares or slabs appearing to float in the air or balance precariously on a point.

His works were deliberately made to be walked around; viewing them from multiple angles gave dramatically different experiences. He was among a group of sculptors — his friend Mark di Suvero is another — who expanded the view of sculpture from something that sits on a pedestal to something that inhabits and interacts with space on a grand scale. 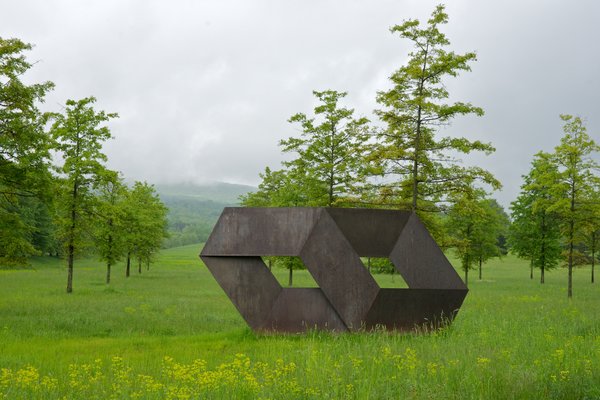 “People used to think sculpture was a tactile thing,” Mr. Ginnever told The Star Tribune of Minneapolis in 2008. “These things aren’t tactile. They’re to be enjoyed visually, not necessarily through touch.”

His works have intrigued countless people, whether visitors contemplating them at the Storm King Art Center in Mountainville, N.Y., or bicyclists zipping by them in Riverside Park in Manhattan. Not everyone, though, has been a fan.

When Mr. Ginnever’s works first started turning up in public places in the 1960s and ’70s, the idea of public outdoor art, especially anything abstract or otherwise nontraditional, had detractors. According to The Star Tribune, when his “Protagoras,” a four-ton work of folded metal, was installed outside the federal courthouse in St. Paul in 1976, “someone spray-painted its price — $42,500 — onto the piece.”

But more discerning viewers recognized that Mr. Ginnever was not merely making attention-getting geometric shapes; he was challenging the Western artistic eye, long accustomed to right angles and other conventions, to broaden its view.

“For Ginnever, the freeing of the spatial imagination is truly a freedom,” Bruce Nixon wrote in Sculpture magazine in 2004. “The question, after all, is not merely what we have lost of our ability to read forms in space, but what other aspects of consciousness are affected by the loss.”

Charles Albert Ginnever was born on Aug. 28, 1931, in San Mateo, Calif. His father, also named Charles, was treasurer for the City of San Mateo, and his mother, Helyne Ruth Baumgart Ginnever, was executive secretary to the director of what is now the Mills-Peninsula Medical Center.

Mr. Ginnever earned an associate degree at San Mateo Junior College in 1951. After service in the National Guard, he studied in France and Italy for several years. He returned to the United States in 1955, earning a bachelor’s degree at the California Institute of Fine Arts in 1957.

Accepting a teaching position at Cornell University in Ithaca, N.Y., he drove across the country to get there, taking along a passenger who wanted to be dropped off in New York City: Mr. di Suvero, who had just graduated from the University of California, Berkeley. “I remember him in the intensity of our car-delivery trip across the U.S.A.,” Mr. di Suvero said in a handwritten note to Mr. Ginnever’s family after the death, “talking and formulating our theories of art and aims.”

At Cornell, Mr. Ginnever taught art while studying for a master’s degree, which he earned in 1959. He later taught at other institutions, including, from 1967 to 1974, Windham College in Putney, where he was head of the art department.

Mr. Ginnever began making sculpture in the late 1950s, at first working with found materials like railroad ties. From the very beginning, he said, he wanted people not to be passive stand-and-look viewers.

“You have to do a little work in order to understand the piece,” he told The Lincoln Journal Star of Nebraska last year when two of his works were being installed in parks there. “A lot of people don’t get that, and they will stand in front of a piece and not go around it and think they understand it. You can’t understand any of my works until you circle them.

“What happens is, line becomes plane becomes line again. That’s the whole thing of it. It’s always been my intention to make it an all-the-way-around experience.”

Two of his sculptures were included in “Sculpture in Environment,” an ambitious deployment of works in 1967 by more than two dozen artists in public spaces throughout New York City. (His were in Carl Schurz Park, along the East River.) It was one of the city’s first public-art efforts.

Almost 50 years later, in 2014, his “High Rise” and “Medusa” were exhibited in Riverside Park. “Medusa,” a 1986 work, was inspired by a 1974 visit to Stonehenge in England, where he observed late-afternoon shadows forming parallelograms. He photographed them and used them as the basis for a series of pieces.

Another experience with a New York City park ended unpleasantly, underscoring the practical problems that can be associated with large outdoor artworks in public spaces. In 1970 a 50-foot-long steel sculpture of his, untitled, was installed at Battery Park. “It is the lyrical balance struck between raw, found material and humanly formed artifact that makes it so compelling a work,” Grace Glueck wrote of the piece that year in The New York Times.

But in July 1986, when Mr. Ginnever visited the park, he was surprised to find that the sculpture was gone, replaced by a bed of 45,000 petunias. He learned that it had been cut up by the city Parks Department, welded back together in a smaller form and put in storage. A blunt exchange followed, with the city’s parks commissioner, Henry J. Stern (who died in March), saying that the work had become a maintenance problem.

“We kept this thing for years,” Mr. Stern told The Times. “Then it rotted and corroded and we warned him for six years to repair it, and he didn’t. Now, after six years, he’s trying to make the Pietà out of it. It’s a public park, not a repository for scrap metal.”

Mr. Ginnever said it was he, in fact, who had contacted the Parks Department about making repairs, which he characterized as minor. He had a very different view of the “scrap metal.”

“The piece has been up for 16 years,” he said. “It’s like a tree you see on the way to work every day. All of a sudden someone cuts it down and you realize you had a connection to that tree. I have a real connection to that sculpture, and I think others may as well.”

“His best sculptures have an intensity that expresses a unity of balance, a community of energetic success,” he wrote, “not just the plop-down version of sculpture without ideals.”

Neil Genzlinger is a writer for the Obituaries Desk. Previously he was a television, film and theater critic. @genznyt • Facebook